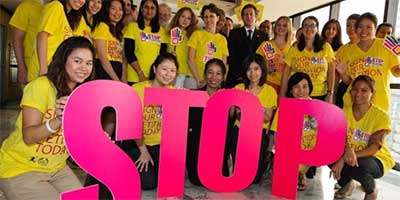 Some children in southeast Asia are trafficked into the sex trade by their families, but activists are fighting back.

Por's final cry for help was an overseas phone call from Japan to her former mentor, Montri Sintawichai, to tell him she wanted to quit prostitution again. She died shortly after at the age of 18, probably from AIDS, probably contracted years ago before the first time she escaped the sex industry.

Por died alone, far from her family in Thailand, but a victim of their decisions.

Montri first met Por when she was in her early teenage years. When she was 13, her father - a laborer from the northern province of Chiang Rai, which borders to Myanmar - brought her to the coastal resort of Pattaya, a notorious sex tourism hub. At a brothel there she worked almost every day for around $100 a night; her father kept nearly all of the money.

One day she begged a client from Dubai to get her out of there. Unlike most others, he actually followed through, and that was how Por was rescued and came to encounter Montri, the founder of the Child Protection Foundation.

In many ways, she was a success story.

"She was rescued, she became a nanny, she learned to stand on her own two feet," Montri recalls.

"Then her father called her. He lied that her mother had cancer, and asked her to go to Japan to work as a prostitute. When she called me the last time she apologised for going back to the sex industry.

She said she missed Thailand, that Japan was cold and snowing. She said she would try to return in two months."

She didn't manage to make it back. Before she died, she asked her father not to take the same path with her younger sister.

Despite the temptation to portray rescues as happy endings, they rarely mark the end of troubles for victims of child trafficking. Released from abuse at the hand of their captors, the kids find themselves confronting psychological trauma, physical disability, disease, depression, drug habits, and sex addiction. They face a massive struggle to reintegrate into a social structure that stigmatises them, and in many cases treats them like criminals and illegal immigrants.

On top of these troubles, the root causes behind their being trafficked the first time are often still there, as in Por's case. "Victims are among the most vulnerable to being trafficked. The factors that led to them being trafficked in the first place become exacerbated," says Tara Dermott, the head of development at MTV EXIT, an anti-trafficking campaign. "You are not returning home necessarily the way you left. You become an extra burden on your family."

Many victims come from poor families in regions with few job opportunities. Some feel they have few options other than the sex trade. Many come from dysfunctional families with a history of abuse.

"Some of these children, they have been sexually stimulated since they are 8 years old, until they are rescued at 13, 14, so that affects how they think and behave," says Montri.

Montri sees the damage every day at his children's shelter for victims of abuse in Samut Songkhram. It is a forested river-side retreat where the idyllic calm masks the internal chaos scarring the kids who live here. Two of Montri's charges, girls who were trafficked by their dads into prostitution, tried to commit suicide by overdosing on pills. "They scream, they fight when faced with conflict they react the way they have been treated before," he says.

For Montri the biggest problem is the stigma. "Some kids come here with very serious physical conditions from being hit repeatedly on the head or they have wounds. So they struggle to sit in class because it's hard physically. They may operate slowly. People perceive them as stupid. Some are not able to speak, not able to answer complicated questions. Some of them look much disfigured. And these kids have to go to school with other children."

One of the kids at the shelter, Ton, says he is six years old even though he is actually 12 - he can't tell his age properly, Montri says. His dad would take out his anger on Ton by cutting him and stamping on the child's head with his feet. When he first arrived at the shelter, Ton spoke only gibberish, even though he was already nine years old. He ate anything, even live geckos, because he didn't get enough to eat at home.

"I have nightmares that I'm running on the road away from my father," Ton says. "He's carrying a knife, running after me. But I don't manage to run away, and father cuts my left arm off. I wake up in the middle of the night; I don't cry, I'm happy that it was just a dream."

A lot of child trafficking victims in the region don't get to make it to shelters like the one in Samut Songkhram. Many are trafficked from other countries, and when they're discovered by local authorities they are often not identified as trafficking victims but as illegal immigrants.

"[At the detention center] very often children are not separated from adults. In worst case scenarios, if there has been a raid, they can be put in the same cell as their traffickers," says Mark Capaldi of ECPAT, an anti-child exploitation network.

Chaleerat Saengsuwon of the Alliance Anti Trafic,an NGO , says ensuring the right environment is crucial for the rehabilitation process, with families and local communities often rejecting former victims. "Also, when the victim gets back into the same situation – same alcoholic father, same economic debt – she has to have the strength to say no," says Chaleerat.

Even then, the internal problems remain, and these can be the most difficult to address.

Sina Vann, a former child victim from Vietnam who now leads the 'Voices for Change' campaign that aims to empower trafficking survivors, remembers the scepticism she felt when she was rescued in Phnom Penh."I had a lot of clients, Cambodians and Vietnamese, who I asked many times to help me. But they never helped me, they just came for sex. When I was in the [rescue] center, at first I hated them. I thought they were kidnapping me again. I thought no one can help me. I hit my friend in center. I broke a TV. I climbed up a tree. I was crazy," she says.

Recovering her self-esteem was a long process, one that's still going on today. "I thought that I'm not a good girl. In Vietnam if you are not a virgin no one will want to marry you. So I was thinking that I am a very dirty woman because I have had a lot of sex, and a lot of men know my body," Sina says.

"It is not that the victim is sick," says Jurgen Thomas of Alliance Anti-Traffic. "In my opinion, they will never be 'rehabilitated'- it's not that we give them medicine and fix everything. It's in the heart. They can only learn to live with it."