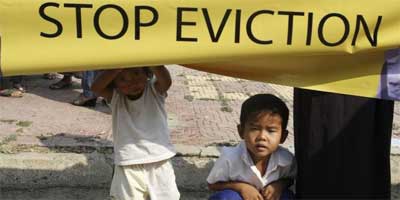 A Cambodian girl holds a banner next to a boy as former residents of the Dey Krahorm community gather in front of the site where they used to live before being evicted by government forces in Phnom Penh January 24, 2012. | Photo: Reuters

A 14-year-old girl was shot and killed on Wednesday following a violent land eviction in the Cambodian countryside.

The shooting happened as armed police tried to clear roughly 1,000 villagers from their land in the northeastern province of Kratie, according to rights groups.  According to witnesses, officers fired live ammunition against the villagers, who were protesting the loss of their farmland

Rights groups are warning that the government risks further violence if it does not take immediate steps to revamp its controversial policy of issuing economic land concessions to private firms.

Ou Virak, who heads the Cambodian Center for Human Rights, said the killing is inexcusable.

"We got information that the police or the military fired indiscriminately to the house where this girl was, which resulted in her death," said Virak.

A ricocheting bullet killed the teenager, said a local official.

Rights groups said the villagers were living on land that had been awarded to a private firm as part of the government's much-criticized policy of issuing economic land concessions. It's believed to be at least the fifth time in seven months that authorities have been accused of shooting at unarmed civilians in land dispute cases.

"There are many, many cases where the police tend to use excessive force," he said. "And the fact that these economic land concessions tend to have a negative impact on local communities, it's bound to happen where the community will start to stand up and will start to resort to measures, then the military and police tend to respond with more violence.

If it continues to go this way, there will be more violence in the future."

This month, the government announced it would put a moratorium on issuing new land concessions. But critics say authorities have done little to explain how the process will be improved, leading some to suggest that the move was merely a political gesture ahead of commune elections scheduled for June.

Professor Surya P Subedi O.B.E.During a visit last week, the United Nations' special rapporteur for human rights in Cambodia, Surya Subedi, said the government's land policy is one of the most critical issues facing the country.

"There ought to be a proper policy debate in the society," said Subedi. "People from all walks of life should be able to make a contribution to that policy debate. Once that policy debate comes to an end, then there should be a well thought out legal framework which takes into account Cambodia's obligations on international law --what are the basic rights of the people that ought to be respected when granting economic land concessions."

Wednesday's shooting comes less than three weeks after Chut Wutty, a prominent environmental campaigner, was gunned down under suspicious circumstances while investigating allegations of illegal logging in western Cambodia.