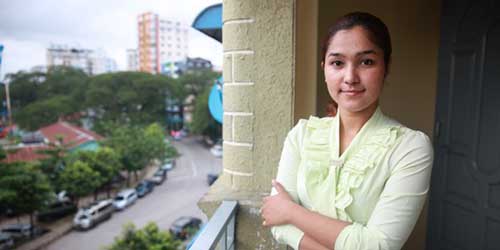 Wai Wai Nu is a diminutive 27-year-old with pro-democracy activism in her genes and a quarter of her young life spent behind bars.

The former political prisoner is now working to end the persecution faced by her people, the stateless Rohingya Muslims in western Myanmar.

The mistreatment she and her family have suffered is just one example among many of abuse aimed at the Rohingya, a minority of around 1.33 million living mainly in Rakhine State. Most are denied citizenship despite having lived in Myanmar for generations.

Wai Wai is one of Myanmar's brave, articulate and clear-sighted women working on countering the extremist views that tend to dominate the dialogue over religious intolerance and communal violence.

Whether the discussion is about the Rohingya or women's right to marry men of their choice, firebrand Buddhist monks and nationalists have successfully stoked Buddhist-Muslim tensions.

"Right now, the Buddhists are becoming more afraid of the Muslims and vice versa. Everybody feels insecure," she told Thomson Reuters Foundation in her sparsely-furnished office at the top of a six-storey building in Myanmar's main city, Yangon.

"There is little contact, trust or relationship between the communities at the moment so it's easy for an agent provocateur to incite riots and hatred."

Wai Wai's ambitions are long-term: peaceful co-existence of different groups in Myanmar, especially in her home state Rakhine, also known as Arakan, and an end to injustice.

"We would like Rakhine State to be a fair, developed and prosperous state for everyone, regardless of their race or religion," she said.

Her organisation, Women Peace Network Arakan, conducts training to promote better understanding between the communities. She is also one of the few advocating for the rights of Rohingya women, who suffer multiple layers of discrimination.

Wai Wai was 18 and studying law when she was arrested in 2005. Her crime was to be the daughter of Kyaw Min, a Rohingya who was elected as member of parliament in the 1990 elections, the results of which were ignored by Myanmar's military rulers.

A former state education official in Buthidaung in northern Rakhine State, Kyaw Min was also a member of the Committee Representing the People's Parliament, a group of MP-elects from the 1990 vote led by Nobel peace laureate Aung San Suu Kyi.

The family had moved to Yangon in the early 1990s after Kyaw Min faced repeated harassment from the authorities.

More than a decade later, the whole family was rounded up - Kyaw Min first, the rest two months later - and charged under state security and immigration laws. Activists say the junta wanted to silence Kyaw Min's championing of labour rights.

"Ever since I was young, I wanted understand law to make sense of the injustices that were occurring in the country," Wai Wai recalled.

"When we were jailed, my mother said, 'Well now is the opportunity to do so in a real, practical way,' so I guess I was lucky," she added, laughing.

The trial was held behind closed doors, without their lawyer, and the judge refused to listen to them, she said. Kyaw Min was sentenced to 47 years, and the rest of the family - the wife, two daughters and a son - got 17 years each.

"We were shocked into silence. My father was already 60."

"I remember turning to the judge and saying, 'Thank you for the sentence. Our grandmother lived a very long life so we will be ok.' I also told my dad not to feel bad," she said.

"I only burst into tears when I got back to my cell," she added, losing her composure for the first time and wiping tears from her eyes.

She found the mental anguish of imprisonment the most difficult thing to deal with, and kept herself busy. One way was to talk to other female prisoners. Most were arrested for prostitution, running small-scale gambling businesses or drugs.

"They were very young. Some were even younger than me," Wai Wai said.

"They had to do these jobs because there is no other choice. Is it their fault they don't have opportunities?"

Hearing their stories turned her into a feminist and made her want to help marginalised women, she said. "I couldn't wallow in self-pity after meeting them. Insein Prison was my university about life."

Still, the privations of prison life left long-lasting scars on the family. Her father's health deteriorated and her sister contracted liver disease that almost killed her.

All the family members were released in January 2012, together with hundreds of other political prisoners, under the new government of President Thein Sein, which took power in 2011 and embarked on a series of political and economic reforms.

Conditions for the Rohingya in Rakhine state, however, have only got worse.

Kyaw Min won the 1990 elections as a Rohingya politician. The term has always been debated but it was not the political lighting rod that it is now, made worse after religious clashes in June and October 2012 left 140,000 people homeless, mostly Rohingya.

The government and ordinary Burmese use the term Bengalis, implying they are illegal immigrants from neighbouring Bangladesh.

"The Rohingya used to lead dignified, respectful lives. They were not always stateless. My parents, grandparents and great-grandparents were citizens," Wai Wai said.

A citizenship law enacted in 1982 back-paddled history, took away the Rohingya's citizenship, and imposed restrictions on travel, education and jobs, she said.

"Not having this little ID card affects the whole community. It allows the violation of basic human rights and takes away people's dignity and mental well-being," Wai Wai said.

On Sept. 15, the world's first forum on statelessness will open at The Hague, focusing on the estimated 10 million stateless people worldwide. Wai Wai hopes it will raise the issue of Rohingya.

"How is it that our fathers were in the government service and able to run in and win elections but that is no longer possible during our time?" she asked.

She blames the negative perception towards the Rohingya - which stereotypes the group as polygamous and criminal - on decades-old propaganda by the military.

The United Nations has said the Rohingya are "virtually friendless" amongst Myanmar's other ethnic and religious communities. Even human rights activists, including Aung San Suu Kyi, have failed to speak up on the Rohingya's behalf.

"We too sacrificed many things for the same cause - democracy - and we too are working towards a better future for our country," Wai Wai said.

"So it really hurts when human rights advocates say Rohingya shouldn't have rights.

"But then, our history has been erased by the junta so it's not their fault. It's the system's fault," she added.