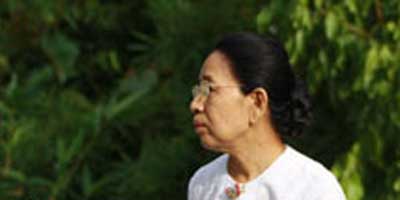 "We were one of the leading nations in agriculture and many other things in South East Asia. We have lost it all since the 1962 military takeover. Now advisors come from those countries, which were in very difficult position before 1962, to advice us on agriculture, and so many other things. Our health system has collapsed. Our education system, which was of the same quality as that in India those days, has now degenerated. Above all, our legal system does not exist at all. The courts are in neglected buildings, and they are quite dirty. Lawyers have to pay bribes to police officers. Corruption has got into everything..."

Ms. Than Than Nu, the daughter of the first Prime Minister of Burma, Mr. U Nu, in a conversation with me and two of my colleagues today (27 November 2012) at her residence in Yangon.

Than Than Nu showed us her father's autobiography written in Burmese that is reprinted after the recent lifting of censorship. Earlier, on three occasions, the military censor had refused permission to publish and had informed the publisher, not to bring it for a fourth time, as the censor himself had personally forbidden the publication.

After the censorship was lifted and the book reprinted, it has become a best seller. Some years ago this book was also translated into English under the title U Nu, the Saturday Born. Ms. Than Than informed us about the 1968 takeover and how the situation became worse by 1969 when their family had to flee from Burma. There was large-scale exodus of many, including the more educated sections of Burmese. She also spoke about how her father tried to organise an armed resistance from the Thai-Burmese border and how that too finally failed. Then the family went to India and Than Than returned only 2003. During exile, Than Than worked for the All India Radio, Burmese broadcast. She told us about how the broadcast from India became popular throughout Burma and the Burmese people across the world in those days of repression and how this broadcast was stopped after the Prime Minister Mr. Rajeev Gandhi's assassination.

Answering our questions Than Than said that prior to 1962 there was a strong Supreme Court, a good judicial system and also a well placed legal profession. The law was respected and that was one of the reasons for the stability then. However after the military takeover, gradually, the judicial system came under the military control and lost its independence. Corruption was widespread and the people lost any trust in the legal process.

With the collapsing of the legal system, distrust about property rights spread and today one cannot be sure about ones ownership about anything. The government can confiscate anything and powerful persons can takeover any property. There are complaints about land grabbing everywhere.

Now there is an effort to make changes and Than Than believes that these are genuine efforts. However, there is also very strong resistance to change by those who have vested interests. They will try to resist many efforts for change. So there are formidable obstacles on the way. However the people are making efforts and they will fight on. Smaller parties like the Democratic Party to which Than Than belongs have also contributed to change though that is not noticed or talked about. What Than Than talked about regarding the dismal collapse of the rule of law system can easily be noticed everywhere. Than Than added that people talk about police reforms, but without judicial reforms, police reforms does not make any sense.

In a discussion with 30 young lawyers and political activists in Yangon on the rule of law, when a question was asked whether it is legal for policemen to beat-up people, the answer was that it happens in all police stations throughout the country. The idea whether something is legal or not, did not make sense to them. If someone becomes a victim of crime it is hardly possible to expect any effective legal intervention or justice in any case. Corruption has got into everything and within that setup everyone knows that there is no real independence of the judiciary.

While these young lawyers and political activists are quite surprised and happy about the changes that are happening, like the beginning of the parliament where the opposition is actively participating in debates, and the lifting of censorship and the expansion of rights to have demonstrations, they were pessimistic about any rule of law emerging in the country in the near future. The lawlessness is so widespread that they are confused about how things could change. However many among them are persons who were imprisoned for political activism in the past, and they are determined to remain active for bringing more changes despite the confusion as to how this would be possible.

It is obvious that the media repression that prevails today in Sri Lanka has seized to exist in Burma. From the point of view of freedom of expression, and space for political activism, Burma now is a far better place than Sri Lanka.

About the author : Basil Fernando is a lawyer and the Director for Policies and Programmes at the AHRC. The Author could be contacted at

About AHRC: The Asian Human Rights Commissionis a regional non-governmental organisation that monitors human rights in Asia, documents violations and advocates for justice and institutional reform to ensure the protection and promotion of these rights. The Hong Kong-based group was founded in 1984.