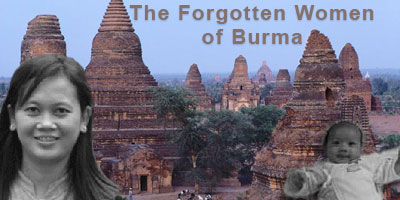 Nilar Thein, born in 1972, was one of the most prominent women activists in Burma. She is now one of more than 175 women locked away in Burmese prisons for their pro-democracy activities.

"We, the Burmese women, interested in politics and taking part in politics, are facing violence and torture and being killed. From here, I would like to request women’s organizations all over the world to form a investigative commission and to take action for the things going on in our country."  Nilar Thein

When Nilar Thein was 16 years old, she joined the All Burma Federation of Student Unions (ABFSU) and took part in the demonstrations in 1988, as part of the so-called '88 Generation Students', comprising former student leaders and political prisoners.

Three years later, she was detained and questioned for 2 months in the notorious Insein Prison.

When she was 24, Nila Thein joined '96 Generation' of student activists who staged bold demonstrations against military rule in December 1996, when she was again arrested.

During student demonstrations in 1998 she was once more arrested and this time sentenced to 10 years in jail. During her time in Thrawaddy prison she sufferred acute health problems.

Nila Thein was finally released in 2005.

In the following May she married Kyaw Min Yu, a leader of the 88 Generation Students,.

Together, they continued to struggle with others for democracy and a better life for all in Burma.

In May of the next year, just before the 2007 demonstrations began,  their daughter was born, Phyu Nay Kyi Min Yu (Sunshine).

Both regarded their pro-democracy work as an investment in Sunshine's future.

“We want her to grow up in a just, democratic society, free from fear and conflict,” Nilar Thein has said.

"A midnight knock at our door... changed our lives dramatically", Nila Thein recollected in an article she wrote in 2008,

"The military junta's security forces took my husband Kyaw Min Yu (also known as Jimmy) on the night of August 21, 2007... He and other leaders were taken from their homes that night by the authorities."

Jimmy was arrested, along with at least a dozen other opposition activists who had demonstrated that day against the sharp increases in the price of fuel which were announced with no warning.

"I woke up from a dream in the middle of the night. I was with my daughter, playing in a small garden.

We were playing hide and seek. I was looking at her from behind a tree.

She was so beautiful, with the prettiest smile on her face, looking for me happily.

I couldn't hide anymore. I wanted her to find me. I wanted to hold her in my arms and kiss her face gently.

I started to show myself to her, but, suddenly I saw three men -with black coats and ugly faces - watching from the shadows near my daughter. I stepped back. I wanted to be found by my daughter, not by them.

I still saw my daughter, still looking for me with her innocent smile.

I didn't want to hide anymore. I wanted her to find me, but these men would take me away and put me in hell. Then I woke up, with tears on my cheeks."

Sunshine was three months old when her father was arrested.

Nila Thein went into hiding and took her baby daughter with her. But Sunshine's cries were in danger of giving them both away, so Sunshine went to stay with her elderly grandparents and her mother moved secretly from one hiding pace to another.

One night, Nilar sneaked back close enough to hear her baby crying through an open window.

"They are using her as bait," she said at the time. "I should be breast feeding her. But I cannot give in."

“How can I express my terrible feeling of missing my baby?” Nilar Thein told The Irrawaddy news magazine.

Her painful breasts were swollen with mother's milk.

“When you have the feeling of your breasts engorged with milk it reminds you that your baby is hungry for your milk,” the magazine reported a close friend as saying.

Whilst in hiding, Nilar Thein continued to issue public appeals calling for the international community to take action in resolving the grave human rights abuses that women suffer under the military regime in Burma.

In the interview with The Irrawaddy, she continued,

“Only if we end this bad system will the future of Burma’s people, including my daughter’s, be bright.

I love my daughter, but I also need to consider mothers fleeing with their children and hiding in jungles, such as in Karen State because of the civil war... My suffering is very small compared to theirs.

Compared to their children, my daughter still has a secure life with her grandparents, even though I’m not there.”

By allowing concern for one’s own family to divert attention from the hardships of others “we will face more terrible suffering in the future... and then my daughter will not be able to enjoy a good life.”

A year later, three months before her arrest, Nila Thein wrote an article for Bangkok's Independent Newspaper, The Nation - 'Who will save Burma's women and children?'

In it she wrote:

"Coincidentally, the UN Security Council will hold a debate in New York today on "Women, Peace and Security". This debate is a discussion of UNSC Resolution 1325, which was passed unanimously in October, 2000.hein - June 2008.

Resolution 1325 "Calls on all parties to armed conflict to take special measures to protect women and girls from gender-based violence, particularly rape and other forms of sexual abuse, and all other forms of violence in situations of armed conflict." It also "Emphasises the responsibility of all States to put an end to impunity and to prosecute those responsible for genocide, crimes against humanity, war crimes including those relating to sexual violence against women and girls, and in this regard, stresses the need to exclude these crimes, where feasible from amnesty provisions."

US Secretary of State Condoleeza Rice is expected to chair the debate, with many world leaders discussing the development of women, peace and security. Will they discuss Burma? Will they remember Daw Aung San Suu Kyi and the women of Burma who are suffering all forms of abuse by the military junta?

When the government itself is the abuser of human rights and the perpetrator of rape and other forms of gender-based violence, who will protect the victims? Who will end their tragedy? Who will secure the joyful reunion of mothers with their children?"

"I am so choked up with feeling when I had to leave my daughter with my mother-in-law. It will not be wrong to say it was the worst day of my life... [yet] I don't regret it at all. I don't because just like my daughter I see many faces of children in my country who lack a future. With that I encourage myself to continue this journey."

In several interviews while in hiding, Nilar said that her greatest concern was the arrests of her friends and colleagues, many of whom had been in prison several times before. Given their prominent activism, Nilar knew that ill-treatment was waiting for them in custody.

“Now, when people they [security services] are urgently trying to find, including Htay Kywe ... and Mie Mie, are arrested like this, I am extremely concerned for their safety. I’m really sad thinking what kind of torture they must be undergoing. We, the Burmese women, interested in politics and taking part in politics, are facing violence and torture and being killed.”

Nilar Thein managed to avoid the security services hunting her for more than a year. Then, when Sunshine was sixteen months old, her mother was arrested - 10th September 2008.

By December 2008, all of the 88 Generation Students on trial had each received sentences of 65 years, with still more charges pending against them.

Nilar Thein was charged with the same list of 22 offenses as the 88 Generation Student activists. She was also sentenced her to 65 years in prison.

The charges against them include libel against foreign powers, statements causing public mischief, and unlawful association.

In 2008, Nilar Thein, Phyu Phyu Thin and Su Su Nway received the Homo Homini award from the 'People in Need' organisation, a Czech-based group, for their promotion of democracy, human rights and nonviolent solutions to political conflicts.

Phyu Phyu Thin is an HIV/AIDS activist and Su Su Nway, who was subsequently imprisoned, was campaigning against forced labour and the land rights of farmers.

“When I head that we were given the award, I thought of all my colleagues who are in prison and the monks and laypeople who sacrificed their lives on the streets, and I felt sad,” Nilar Thein told The Irrawaddy news magazine.

The secretary of the Assistance Association for Political Prisoners—Burma, Tate Naing, noting the awards, said, “They are all leaders of the Burmese women activists’ struggle for democracy and human rights and they all supported the monks’ peaceful demonstrations, so the prize really honors all the activists.”

Nilar Thein and her husband are imprisoned hundreds of miles from each other, and from their families. Visits are rare and they have only seen their daughter on a few occasions.

In 2011 a campaign video was produced in which Phyu Nay Kyi Min Yu (Sunshine) features. The following is an extract:

Who can rescue Nilar Thein?

On the run in Burma