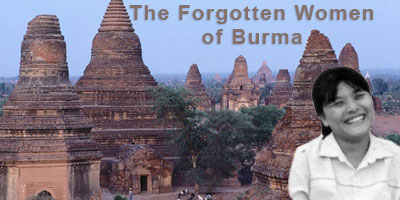 Hnin May Aung (aka Noble Aye)

Noble Aye’s mother Daw Aye Myint Than was the Secretary of the NLD for Thingangyun Township and an executive member of the NLD Rangoon Division Women’s Wing.

She supported the forming of the Committee Representative People Parliament (CRPP) The CRPP is constituted by representatives of the political parties that won the majority of seats in the 1990 election, and acts as an executive committee of the parliament, most of whose members are in prison, exile or detention.

Noble Aye joined ABSFU when she was a student at Dagon University. She took leadership in organizing students during three demonstrations in Rangoon in 1998, and distributed clandestine bulletins from the underground students’ organization. She was also a student organizer in support of the CRPP.

In September 1998 both Noble Aye and her mother were arrested for participating in the pro-CRPP movement. Noble Aye was sentenced to 42 years imprisonment.

Noble Aye and her mother were initially placed in separate prisons. However, her mother became seriously ill in Myaungmya prison.

When Noble Aye was informed of this by her family during a visit, she strongly demanded until the authorities allowed her to be transferred to care for her mother. While they were in prison they were visited by the Amnesty International Delegation in 2003. She was released on 6 July 2005 as part of an amnesty for political prisoners.

Foreign companies are lining up to partner with Burma’s military junta and tap into the country’s lucrative resources, particularly oil and gas fields.

This foreign investment provides a crucial source of support to the junta, allowing it to ignore demands that it return Burma to civilian rule and end human rights abuses.

The billions of dollars generated by these projects, which involve at least 27 companies from 13 countries, help to fund the military without bringing benefits to ordinary people.

Many of the foreign companies involved are wholly or partially owned by governments.

That is the case for China, India, Japan, Malaysia, Russia, South Korea, and Thailand.

After her release she was not allowed to re-enter her university and was not re-issued her identity card. In Burma citizens must show their identity cards at police check points when travelling, it is also needed open a bank account etc. so it made life much more difficult without her card.

She studied English at the American Centre in 2006 and 2007. She also visited and helped the families of other political prisoners, and opened a boarding school for poor children at her home. In 2006 she started working as an editorial staffer in the office of a monthly magazine.

Despite the threat of the military intelligence, as a former political prisoner, Noble Aye continued to work for human rights and democracy. She is a member of the 88 Generation Student group.

During 2006 and 2007 Noble Aye participated in the “White Sunday” campaign along with other members of the 88 Generation Students.

In August 2007 she participated in the protests against the regime’s economic mismanagement, hikes in fuel and commodity prices, and the falling standard of living in Rangoon.

The Burmese government had raised the price of subsidised fuel by between 100 and 500 percent, causing the cost of public transport and a number of staple commodities such as rice and cooking oil to increase dramatically.

Following the overnight fuel price hike on 15 August 2007, the 88 Generation Students, along with other opposition groups staged peaceful walking protests throughout Rangoon, this movement spread across Burma.

On 19 August 2007, the group led a march by more than 400 people from Rangoon’s Kokine junction to Tamwe market in a protest against high fuel prices. The activists, who had attended a memorial service for late National League for Democracy leader U Kyi Maung in Bahan township, walked to Tamwe instead of paying for bus fares pushed higher by increased gas prices.

On 22 August 2007 Min Ko Naing was arrested in a late night raid on his home along with twelve other leaders and prominent members of the 88 Generation Students group.

Noble Aye was arrested in a midnight raid on her home on 23 August 2007. The authorities were searching for another woman named “Noe Noe” (aka New Hnin Ye) but arrested “Noble Aye”.

However even after they learnt Noble Aye’s true identity they didn’t release her. She was charged with 12 other members of the 88 Generation Students group for their participation in the protests against the government and for forming the organization.

Noble Aye aka Hnin May Aung was charged under the following sections of law:

1) Section 5/96(4) of the Law Protecting the Peaceful and Systematic Transfer of State Responsibility and the Successful Performance of the Functions of the National Convention Against Disturbances and Oppositions (State Law and Order Restoration Council Law No. 5/96 (7 June 1996)

On 21 November 2008 thirteen members of the 88 Generation Students group, who had been detained in Insein Prison for over a year, were sentenced from three years to five years by a special court held inside Insein Prison Compound.

In October 2008, the 88 Generation Students, including Noble Aye, who were at that time detained in Insein prison, were awarded “2008 President’s International Democracy Award” from the American Federation of Teachers (with more than 1.4 million members) in the U.S.

On 7 April 2009 Noble Aye was awarded honorary citizenship of the city of Villa Santa, Italy. This was awarded by Mayor, Enrico Fontana and was received by Beaudee Zawmin, Euro-Burma Office Finance Director.