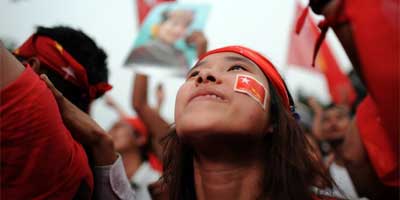 Aung San Suu Kyi has won a landmark election, now she faces the challenge of persuading the army to withdraw from politics

A moment to rejoice

If Burma ever needed a moment to rejoice, this was it. In a nation ruled by an often brutal military junta for nearly half a century, Aung San Suu Kyi's apparent victory in Sunday's parliamentary by-election could not be exaggerated.

Swarms of chanting Burmese flocked to National League for Democracy's (NLD) Rangoon headquarters as the sun set over the crumbling city, calling for the fall of "a sham democracy" and the return of "our fair leader, our beloved leader, Mother Suu".

"We did it! We won!" shouted the thousands of supporters as they filled the streets clapping, dancing and waving red party flags.

While unofficial party results indicate that Suu Kyi may have won 65% of the vote in 82 of her constituencies' 129 polling stations, local observers said that the number may have been as high as 90%, with the NLD reported to have won a minimum of 40 of the 44 seats it contested in the 664 parliamentary seats up for grabs.

The NLD claimed victory in 13 constituencies, including two in the capital Naypyidaw, but no official tallies had been released by 9pm on Sunday. Results must be confirmed by the official electoral commission, with an official declaration expected within a week.

The US secretary of state, Hillary Clinton, gave cautious support to Sunday's celebrations, saying: "The United States congratulates the people who participated, many for the first time, in the campaign and election process." She added: "It is too early to know what progress of recent months means and whether it will be sustained. There are no guarantees for what lies ahead for the people of Burma."

The daughter of independence fighter Aung San, the Lady – as she is called here – is herself in many ways considered a demigod after spending the greater part of 22 years under house arrest. Since her release in November 2010, Suu Kyi has been able to take on the role that many Burmese thought she may never have a chance to perform: that of a pro-democracy campaigner-turned-political leader who may finally make the changes for which she has so long called.

Competing against a military doctor from the junta-backed Union Solidarity and Development Party (USDP) in Sunday's election, Suu Kyi campaigned all over the country for her party as well as in her constituency of Kawhmu, a string of villages comprising 87,000 eligible voters, many of whom were badly affected by the 2008 cyclone Nargis.

Some argue that Suu Kyi chose that constituency to bring media attention to the way of life of most Burmese, a third of whom live on just 30p a day. Amid the thatched hut villages and occasional golden pagoda of the delta's rice paddies and rubber plantations, water comes from a bucket dipped into the ground; electricity is delivered by diesel generators; oxen plough the earth; and school ends at the age of 10.

Hoping for an end to misery

With Daw [Auntie] Suu on the campaign trail, villagers not just in Kawhmu but all over the country have been hoping for an end to their misery through a real introduction to modernity. "I'm poor, and I want Daw Suu to give me a job," said betel-nut farmer Sae Sein Myint, 47, from her dusty roadside village of a handful of bamboo huts and a group of pigs snoozing under trees.

"I earn 1,000 kyat a day, and that keeps going down because of fluctuating prices. I'm struggling. I want my kids to be able to work in a factory, not struggle like me."

All along the winding road to Wa Thin Ka, an ethnic-Karen village where Suu Kyi and her convoy spent Saturday night, supporters gathered in the hot afternoon sun to glimpse the so-called "living saint" as she drove past. Though just 40 miles from Rangoon, the village is a four-hour drive along unpaved, bumpy roads, either side of which villagers in red bandanas and Suu Kyi-emblazoned T-shirts clutched red and white roses – symbols of purity and bravery – and cried out as the motorcade wove slowly through the crowds.

As if a Hollywood actress had suddenly landed, Suu Kyi was followed by trucks full of cheering monks, young men with freshly shaved faces, babies with NLD stickers on their cheeks and grandmothers holding red flags, in turn followed by yet more supporters in minibuses and cars, and on tractors, bicycles and motorbikes.

The atmosphere was festive and electrifying, as those gathered danced, sang and chanted together.

When the motorcade finally arrived at Wa Thin Ka, locals in Karen dress performed traditional dances while enterprising shopkeepers served noodles, tea and wide smiles to the influx of supporters and Burmese and foreign journalists.

Critics have said that, while Suu Kyi may be considered a national hero much like her father, she lacks the technical and administrative know-how to be truly successful in government. Suu Kyi has said that she is ready to meet the challenge, and that even if just one candidate from her party is able to fill an open parliamentary seat, that "one voice can be heard loudly all over the world in this day and age".

Despite irregularities in the polls, among them waxed ballot papers that made it difficult to mark votes and ballot cards lacking official seals, victory for the NLD, if the numbers are correct, is a glorifying moment for a nation where poverty, sanctions and censorship – official and self-inflicted – have dominated the way of life for most Burmese.

Under the presidency of Thein Sein, however, a former soldier with an eye for reform, the country of 60 million has undergone a transformation that has seen ceasefires declared with ethnic rebel armies; censorship laws eased; political prisoners freed and Suu Kyi released from house arrest with permission for her party to participate in the election.

It is hoped that an NLD victory may allow an easing of foreign sanctions and a reintroduction of Burma to the rest of the world – but some are hoping that the Burmese will have a chance to catch their breath before any massive change takes place.

"Most Burmese think that this will suddenly change everything, because they've been living under repression for so long and they want that way of life to end," said Myo Kyawt Myaing, a 40-year-old Burmese hip-hopper outside a polling booth in west Rangoon.

"But most of us can't handle too much change too fast. We still only know the Burmese way of life. It's a lot slower."