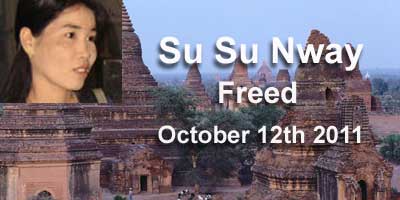 Among six released from Kamti prison is high-profile activist Su Su Nway, who was sentenced to 12 years in 2008. She was the first activist to successfully sue the regime.

Su Su Nway is from Htan Manaing village, Kawhmu Township (located 50 mi from Yangon), in Yangon Division. She filed a complaint after she, along with other villagers, were forced into working on a road construction project by the local Village Tract Peace and Development Council. The case was then pursued by NLD lawyers. As a result of the case, on 3 September 2004, Sein Paw, Chairman of the Tanmanaing Village Tract Peace and Development Council, was sentenced to 16 months in prison, while Council members Kyaw Thin, Myint Thein, and Aung Khin were sentenced to eight months each. Following the court case, Su Su Nway stated that Sein Paw passed her on the road with a companion and told her she should be "beaten to death".

In 2005, the new town chairman charged her with harassment and defamation, a tactic that the Asian Human Rights Commission noted to be a common reprisal against Burmese activists. Su Su Nway was then sentenced to an 18-month term in Insein Prison. Before her sentencing, she told reporters, "I have no responsibility, no power and no position. They plot against a common girl, a disease sufferer, and sue her because they are afraid. If they are afraid like that, our side is winning."

In February 2006, Nway attempted to appeal to the Supreme Court, but her case was rejected, after having appealed to district courts that rejected her cases.  She was released on 6 June 2006, as a result of international pressure from the United States government, the International Labour Organisation (ILO), the United Nations (UN), and NGOs.

Su Su Nway was in hiding for much of 2007, but took part in the August protests against high fuel prices, narrowly escaping a second arrest. On 13 November 2007, she was arrested for hanging a banner near the hotel where UN Human Rights Envoy Paulo Pinheiro was staying while visiting the country.

On 11 November 2008, Su Su Nway was sentenced to 12 years and 6 months in prison. This was reduced by four years in February 2009. Su Su Nway is currently in Hkamti Prison in Sagaing Region. She suffers from a congenital heart condition and high blood pressure, and was initially denied her heart medication by prison officials. She was hospitalized on 20 May 2009, and though she recovered, Amnesty International reports that prison officials have continued to deny her family visits, sufficient food, clean clothes, and adequate medical care.