Charm Tong: Speaking up for the People of Shan State 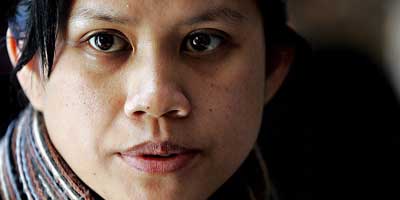 Charm Tong: Speaking up for the People of Shan State

The resumption of clashes between Burmese troops and the Shan State Army-North (SSA-North), a former ceasefire group, since earlier this year has resulted in the displacement of more than 30,000 people, according to a press statement released last week by Shan human rights groups.

To learn more about the current humanitarian situation in Shan State, Irrawaddy reporter Ko Htwe spoke to Charm Tong of the Shan Women's Action Network, one of the groups that gathered and released the information about the impact of the fighting on the civilian population of northern Shan State.

Question: How can you confirm that thousands of local people have left their villages when information inside Burma is still tightly controlled by the government?

We have received video footage and also have our own local network inside. They went to most of the villages in the area where the current fighting is taking place.

In the video, you can see the empty houses that most of these villagers fled from. In some villages, there was not a single person left.

We know the population of this area because the Shan Human Rights Foundation (SHRF) has been doing a survey in different townships inside Shan State.

Q: How were you able to confirm the rape cases?

A: In the case of the four rapes that were reported last month, our members interviewed the rape survivors. We have video footage of the interviews and the testimony of the villagers. But they were still living in the area at that time so we could not mention the exact location, for their safety and security. We have all the testimony and video records of the rape cases.

Q: What is the latest situation?

A: Last month, we received information that about 24 people—mainly children and the elderly—died in this region alone. It is very clear that the humanitarian crisis is caused by the Burmese military regime's attack on the SSA-North over the past five months.

Over 30,000 people have been displaced, and most international aid cannot reach these people in the conflict zone. Therefore the only way to help them is through cross-border aid. It is very important that international donors respond to this very, very urgent humanitarian crisis and also support local networks and cross-border aid efforts.

Meanwhile, the Burmese Army is increasing its troops in the area. This week alone, it sent more than 40 trucks from Hsipaw and Lashio, and a jet plane. With the army around, this rainy season has been very hard for the people.

Q: Is it more difficult for you to get assistance from international donors now that some have cut off aid to NGOs working outside of Burma since last year's election?

A: I think the international donors should look at the reality on the ground. There is a crisis in Burma, especially in eastern Burma. We now have over 20,000 internally displaced persons (IDPs) in Kachin State, and in eastern Burma, even before this conflict, we already had over half a million IDPs hiding inside the country. So I think it is very important for the donors to consider this when the regime is telling the international community that it is making progress with the so-called Parliament or “civilian” government.

In reality, the life of the people has not changed on the ground. The Burmese regime’s army has sent over 4,000 troops and over 42 battalions to surround and attack this region. So the villagers especially are suffering. Burmese army troops in this area take all the villagers’ belongings, including their food, and also use them for forced labor. So there is a big crisis happening in the ethnic areas. The international community should not turn a blind eye to this, but should respond to these urgent needs.

Q: Since you released a statement in July, the number of rape cases has increased.  Why do you think there are more rape cases now?

A: First of all, I have to say that these are the cases that we are able to document and confirm. There may be more that we don't know about yet, so sometimes the report comes later. And sometimes we hear about a rape case but there is not a lot of detail, so we have to follow up and may not be able to put it out immediately.

What we see for sure is that rape has been used as weapon of war, because the Burmese military wants to control and humiliate and also terrorize and demoralize the local community by raping women. It is also very clear that it is widespread, and that those who commit rape are not punished. The more the military presence increases in an area, the more rape cases there are.

Q: Is your statement also intended to support calls for a UN Commission of Inquiry (CoI) on war crimes and crimes against humanity in Burma?

It is very clear that rape has been used and that it is a crime against humanity. We already have extensive information about it through all the community-based and international NGOs and agencies. So I think it is time that the international community stopped turning a blind eye and started taking real action to stop all this violence inside Burma, which is ongoing today.

Q: Do you think that having a vice president who is Shan will do anything to improve the human rights situation in Burma, especially in ethnic areas?

A: After five month of fighting, there has been no mention of the conflict [in Parliament]. So [having a Shan vice president] means very little for people dealing with the real situation and suffering from the effects of the war. Aung San Suu Kyi has called for an end to the fighting and a ceasefire, but there has been no response. So even though the vice-president is Shan, he is just a puppet of the government and cannot represent the voice of the people.

Q: What do you think of the Shan members of Parliament? Are they working hard enough for the people of Shan State?

A: I think the people will decide for themselves if their MPs are doing anything for them. They claim that they work for the people, but the people of Shan state and other parts of Burma will know if they have really done anything for them. If they are there to represent the people, they should be talking about all these problems and trying to solve them. I think it is very clear to local people that nothing has changed in their lives.

A: When the Burmese army moved its troops to the area to attack the SSA-North, they brought nothing with them, so when they come to a village, they take everything from the villagers. All of their supplies come from local people. Everything, from medicine to rice and livestock, is taken from villagers to supply the local base. Villagers are forced to support the Burmese army even when it is attacking civilians. They are also using people as slaves and human shields. Villagers, even novice monks and women, are lined up and forced to go on patrol with the Burmese army to deter attacks.

Q: You have already released many reports, including “License to Rape,” and issued many statements. Do you think they are having much impact?

A: If you watch the video of the new IDPs, you will hear their voices. What we are trying to do is bring the voices of the people to the world, to remind people to take action. We also welcome the recent statements from US senators who expressed their very deep concern about the use of rape as a weapon of war inside Burma.

Every single action brings attention to what is happening inside Burma, and we hope that broadcasting inside Burma will make people there more aware, because information about what is happening in small villages in remote ethnic areas is blocked by the Burmese army. So we hope this information can go back to the people inside so they can also start to help and take action.

They can try to do whatever is possible to assist the IDPs and bring more information out and be a part of this process of bringing the voices of the people to the world.

The Irrawaddy Publishing Group (IPG) was founded in 1993 by a group of Burmese journalists living in exile in Thailand. The Irrawaddy is a leading source of reliable news, information, and analysis on Burma and the Southeast Asian region.
From its inception, Irrawaddy has been an independent news media group, unaffiliated with any political party, organization or government. The Irrawaddy is neither an advocacy group nor an NGO campaigning for particular causes. We believe that media must be free and independent and we strive to preserve press freedom.

The Irrawaddy inspires democratic values via the publication of news that is censored in Burma. We work with international media and media inside Burma, to provide uncensored information on the on-going crisis in Burma for both the Burmese and international community.

The Irrawaddy originated from the activities of a group of young Burmese activists who were forced to flee the persecution of the military regime in Burma, over the1988 democracy uprisings. They fled into exile in Thailand where they worked passionately to alert the international community about the atrocities occurring in their homeland.

SWAN is a network of Shan women active in Shan State and Thailand. It was founded on 28 March 1999. Most SWANs work on voluntary basis.