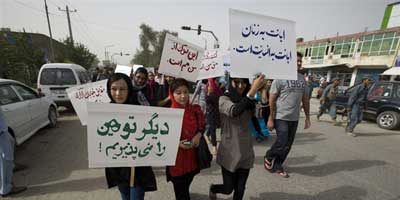 Courageous circles of women’s rights defenders have existed in Afghanistan for over half a century. Now, a generation of Afghan feminists who came of age in the years following the fall of the Taliban regime is rising to challenge their country’s harmful traditions and attitudes more loudly than ever before. Unwilling to compromise with conservatives and disappointed with the pace of reform over the past decade, a group of these women in Kabul formed Young Women for Change in 2011.

Led by feminist activist and Dickinson College sophomore Noorjahan Akbar, the group aims to fight the deep-seated beliefs that underpin the oppression of women in Afghanistan. Its members aren’t content with gender quotas in government and progress on paper. They want to see progress on the streets, in the rulings of the courts and in the behavior of the police. On July 14, they and their allies will march through downtown Kabul in Afghanistan’s first ever public demonstration against sexual harassment.

UN Dispatch interviewed Akbar about her work and the struggles ahead.

UN Dispatch: Several large organizations already exist to defend the human rights of Afghan women. Why did you choose to create a new organization instead of joining an existing one?

Noorjahan Akbar: Part of it was that none of the existing organizations really work to recruit new, young members from the grassroots. Young Women for Change is doing this. We’re recruiting women from the universities and from different parts of Afghanistan. Our members are new faces. Most of them haven’t been involved in any kind of activism before. We’re going to open branches in Takhar and Badakhshan next year and I will personally travel to several provinces to recruit members. Young Women for Change is going to work mostly through volunteers.

UN Dispatch: Legal reform and political inclusion have been top priorities of the women’s rights movement in Afghanistan over the past ten years, but your organization is focusing on street-level issues –literally—such as public sexual harassment.  How does everyday harassment of women relate to the larger issue of the inferior social status of women in Afghanistan?

Akbar: As women have gained opportunities in education and the workforce since 2001, men have started to feel that their territory is being violated. Many men believe they lose ground when women gain ground. They feel threatened by women and that feeling becomes anger.

Here in Afghanistan, people believe a woman belongs to her house or her grave. People say that; it’s a common saying. Sexual harassment is a direct threat to women’s participation in society and there is currently no system to support women who are harassed. The society supports the men who are harassers. Even rape is seen as a reaction to women and not an action of men.

We need to change these attitudes and build a support system for women so that we can protect their right to participate in society. Our purpose is to fight the belief that women do not belong to the outside world.

UN Dispatch: The abuse of women in Afghanistan is generally associated with rural conservatism and lack of education, but you recently initiated a facebook debate about sexual harassment and highly educated men from Kabul responded with statements such as “If you dress immodestly, prepare to be treated immodestly,” excused violence against “bad girls” and even blamed Afghanistan’s corruption problems on the “wishes of women.”  At least one woman in the discussion agreed with those sentiments. Why do you think such resentment toward women persists among the upper strata of Afghan society?

Akbar: I think part of it is competition in the workforce and opposition to affirmative action policies that are creating opportunities for women. But the reality is that a person doesn’t need to be a suicide bomber to think like a Talib [a member of the Taliban]. I know many educated men who think of themselves as intellectuals but would never let their mothers leave the house, would never let their sisters attend a concert.

I know a couple of men my age who are egalitarian in the way they think about women, but they are not the majority of intellectuals or the majority of university students. Just two days ago, I had a conversation with a few university students in Kabul who believed that women should be allowed to show only their eyes and nothing else. They thought that was required by Islam. They thought that should be the reality of our lives. It’s going to be a long journey and ten years is not enough time to change the minds of the majority.

Another issue is that when the government proposes regulations that restrict women’s behavior, conservatives are encouraged. For example, you have the government’s proposed regulation for weddings. If this becomes law, it won’t just limit how much people can spend; it will also regulate how women can dress at weddings.  And there has been talk in the government for years of reinstating a moral police. These policies support the Taliban worldview.

UN Dispatch: Do you think the current trend is toward increasing conservatism?

Akbar: Yes. I’ll give you an example: two years ago men would not stop me and question me if I was alone in a car with a man. Today the police in Kabul do this all the time and the government supports them. Nobody stops the police from harassing me. Men who think like the Taliban are encouraged by this kind of behavior.

UN Dispatch: Young Women for Change is organizing a march against sexual harassment in Kabul. What kind of public reaction are you expecting?

Akbar: We are going to have men who support us marching with us. This is important, because if the march was only of women, people would say, ‘Oh, of course, women always complain about women’s issues.’ With men with us, we will be harder to ignore.

I am sure we will face harassment anyway. We will have a permit for the march, but I am sure the police will stop us and question us anyway. I just hope no one gets hurt. There are risks, but this is an important step and someone needs to take it.

UN Dispatch: How do you think the media will portray the event?

Akbar: My prediction is that most of the media will ignore us. Some will show up, see what we are about and decide to say nothing happened. When we participated in the [youth-led environmental campaign] Green and Clean Kabul , [Iran-backed ultra-conservative television channel] Tamadon wouldn’t interview any of the women who were involved, even though we accounted for most of the people involved, because the women weren’t wearing tight enough scarves on their heads.

There will be some positive responses from friendly media, of course. The BBC will cover the event in Farsi. Hasht-e Sobh [a liberal news daily] will cover it. This coverage will push the problem into the open, where people talk.  Men and women need to start talking about sexual harassment and admit that it is a problem.

UN Dispatch: After the march, what’s next for Young Women for Change?

This fight is increasing in more provinces than just Kabul. Harassment is a threat to women’s participation everywhere in the country and if want more women participating in public life, we need more voices of support.

Another thing we want to do is create a legal aid center that would be a one-stop shop for women. They could be matched up with lawyers, advised on cases, and directed to safe police stations to make complaints. We would also run a hotline for rape victims.  It’s still just an idea, but there are lawyers in our group who really want to work on this.

UN Dispatch: What kind of opposition have you faced so far in your activism in Kabul?

Akbar: Once, when we held a meeting of Young Women for Change at my house, my landlord accused my family of running a brothel. He also placed restrictions on when I could come and go from the house. My family supports me and my father had a harsh conversation with the landlord over this, but we had to compromise in the end. Another time, I had a meeting at the Ministry of Culture and Information and the person I was supposed to meet refused to speak with me and instead wanted to speak with my male driver.

UN Dispatch: How have your personal experiences influenced your priorities as an activist?

But I have a very supportive family. My mother and father made many sacrifices so that my sisters and I could have the best education possible and I have had amazing opportunities to be educated inside and outside of Afghanistan.  Though these opportunities, I learned to think for myself, to value myself as an individual and to do things that others might not, because they accept the status quo. I have been educated to question the things I see in my everyday life and I do not accept the status quo.

I feel proud to be a woman and I want to improve life for women in this country. One of my long-term goals is to open my own high school for girls in Afghanistan.

UN Dispatch: Earlier this year, an anonymous senior official at the US Agency for International Development (USAID) told the Washington Post, “Gender issues are going to have to take a back seat to other priorities. There’s no way we can be successful if we maintain every special interest and pet project. All those pet rocks in our rucksack were taking us down.” How would you respond to a statement like that?

Akbar: I would say, look, if the mission is fighting the Taliban, it is going nowhere. If the mission is negotiating with the Taliban, it’s going nowhere. Negotiations with the Taliban could be held without the presence of US troops. The mission should be empowering progressives, including women. That fight can be won. The negotiations, the High Peace Council, those things aren’t worth it. Fights for women’s rights and for justice are not rocks in American rucksacks; they are the things worth fighting for. And the fight for women’s equality needs the US to be here.