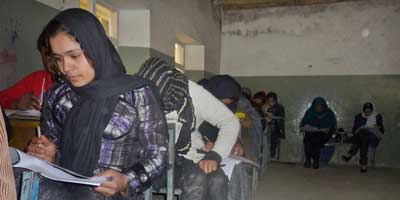 My mother entered the house and pushed the door closed with anger. After getting a cup of green tea, she sat in front of the television as her children watched her with concern and confusion.

"These men are not human beings. They probably do not even respect their own mothers and sisters," she complained after a few minutes of silence. "It is the same story every day. I am old enough to be their mother, but they still feel entitled to comment on my body, insult me, and stop their cars to ask me to go with them. It is as if they think all the women who work outside are prostitutes."

My mother has seven children and teaches fourth-grade Dari literature in one of the public schools in our area. Every weekday, she walks to and from her school only because she is passionate about her job and believes in the power of education to change a country. Despite her school uniform and the big scarf that is always wrapped around her when she is outside the house, my mother is also part of the large proportion of Afghan women who face street harassment on a daily basis.

In April 2011, as a pilot project for a larger research in September, Young Women for Change interviewed 20 female teachers and students about street harassment. Eighteen women reported that they face verbal assault daily, and 14 said they had also experienced physical harassment, including groping, pinching and slapping.

An act of violence and harrassment

Street harassment is an act of violence and discrimination. In addition to making women feel endangered and vulnerable in public, harassment also discourages them from leaving their houses, and feeds the sadistic and discriminatory motivations of the assaulter by objectifying women, which leads to rape and sexual assault. The frequent harassment of women in public spaces in the cities of Afghanistan is a mirror of how the society views women and what it considers to be a woman's job or place.

While many Afghan women have to fight against the misogynistic traditions and values held in their families in order to be "given permission" to participate in the social, economical and political life of their communities, all women have to struggle against the violence, assault, abuse and discrimination that they face daily as they leave their homes.

Street harrasment is most common in cities

In Afghanistan, street harassment is most common in cities, where women are more active. Ranging from insults to physical assault, street harassment has become one of the most common and noticeable methods of discouraging women from publicly participating in society. There have been several incidents of throwing acid on women's faces in Kabul, Herat, Juzjan and Qunduz. All these methods of harassment lead to loss of women's motivation to work and study.

A commonly-used Afghan proverb brutally says: "A women's place is either her husband's house or her grave." This common belief contributes not only to the street harassment of women, but also to the violence and abuse women face in families, schools, universities and workplaces.

However, this is not the only reason harassment is common in Afghanistan. Governmental regulations to restrict women's behaviour and clothing - such as the proposed Wedding Law that would require women to dress "modestly" at weddings - encourages the people, who think like the Taliban and believe women should remain in their homes, to harass women as they exit their houses.

They use women's so-called "inappropriate clothing" as an excuse for assault. This approach causes street harassment to be identified as a reaction to the wrong done by women, which leads to blaming women for the assault.

Despite being listed as the worst country for women by a Thomson Reuters Foundation expert poll, Afghanistan is not the only country where women face street harassment. According to Stop Street Harassment, "80 to 100 per cent of women worldwide face sexual harassment in public."

However, as opposed to many other countries, in Afghanistan, street harassment is not recognised as a problem and a system to support and assist survivors of assault is non-existent. Members of the Afghan National Police often engage in harassment of women and, despite the fact that insulting women is considered a crime by the Law Against Violence Against Women, the issue of street harassment is not specifically identified or addressed.

So far, no coordinated action has been taken by the government, namely the Ministry of Women's Affairs or the Ministry of Culture and Information; by the media; or by civil society organisations to recognise the phenomenon as a social issue that needs to be addressed.

Individual women have developed their own methods to fight street harassment. To deny the satisfaction of accomplishment to the violators, many women adopt a silent attitude towards the harassment they face. The silent treatment is a common way women choose to protect themselves and discourage the person who verbally abuses them.

Another way of dealing with this problem has been initiation of the harassment by the women when they say something condescending to men, in order to prevent their harassment and to prove that they are not afraid of men's presence. Some women have verbal fights, or mini- fist-fights that usually end with the interference of an outsider.

These methods can be efficient in stopping a few cases of harassment. However, to efficiently stop street harassment, there needs to be a coordinated public movement against it.

To start this movement, Hadia-Afghan Youth Volunteer Group for Social Reform and Young Women for Change (YWC), an organisation working for the welfare and empowerment of women, organised Advocacy for Dignity, a march against street harassment on Thursday, Jul. 14.

Members of YWC and Hadia hope that this campaign will be the beginning of a dialogue about street harassment and advocacy against it and that men, rather than the women victims, will be held responsible for their disrespectful behaviour.

This demonstration, which is expected to draw dozens of youth from across the city, is the first of its kind in Afghanistan. The majority of the participants in the campaign will undoubtedly be women, but many young men have also expressed their interest in the event. We will gather in front of Kabul University's main gate at 3:00pm.

A call for media support

In addition to advocacy through the walk, Hadia and YWC members have invited Afghan and international media to contribute in raising awareness, and to recognise street harassment of women - both as a violation of their human rights and as an issue that discourages women from social participation.

Noorjahan Akbar is currently teaching Afghan children in orphanages to write creatively under a project called Stories to Heal. Noorjahan is also the founder of women's advocacy organisation Young Women for Change and a member of Hadia-Afghan Youth Volunteer Group for Social Reform.