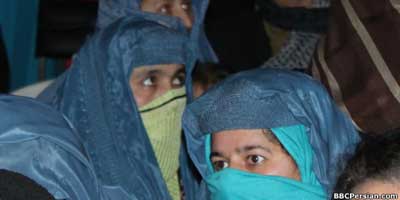 On March 4th, three women’s rights organizations in Afghanistan, Women’s Political Participation Committee (WPPC), All Afghan Women Union, and Development and Support of Afghan Women and Children Organization (DSAWCO), united in organizing a gathering at the modest hall of Foundation for Culture & Civil Society to commemorate the International Women's Week 2013. The hall was filled by guests and many participants resorted to standing due to lack of chairs. The walls were covered with posters about women’s rights and demands. Speakers included presidential candidate and head of Women Affairs Commission at the Afghan Parliament, Fawzia Koofi, as well as members of the civil society, like Dr. Alema, a founder of WPPC, and Zahra Sepehr, founder of DSAWCO. Gatherings like this are not uncommon in Afghanistan. In fact, several similar events are planned in various universities and even in provinces other than Kabul.

However, four things stood out in this event, which was widely covered by Afghan media for International Women’s Day, March 8th.

Humble and Simple Gathering in Memory of Lost Lives and Leaders

The first and most obvious distinction between this event and others was the fact that no food or drinks were served. Serving at least tea has now become traditional in civil society gatherings, but the organizers of this event made it clear that the point of the gathering was only to speak up and not fulfilling formalities.

Another quality that set this event apart was the observation of a minute of silence to remember women’s rights activists in the past. The photos of women such as Zakia Zaki and Malalai Kakar were displayed on the walls of the hall and guests were invited to remain silent for a minute. Often women who are killed for fighting for their rights are forgotten about once political interest in following up their cases dies away. Events like this one will make women aware of their history and their struggle in addition to building solidarity among women of all ethnicities who have lost leaders.

Women in this event used it as an opportunity to define their priorities themselves. This is a sign of the beginning of an independent women’s movement that wants rights on its own terms. The gathering announced the upcoming year - “The Year to Meet Women’s Political Demands”, hinting that Afghan women know what they need in order to safeguard their rights and are speaking up. Will Western and Afghan policy-makers take the priorities of Afghan women into account?

This was perhaps the first time in the last ten years that {Afghan} women leaders evaluated their work, criticized the weaknesses and suggested ways to improve the movement in itself. It was clear that during this event, the audience were not Western powers or Western feminists, or even Afghan men or government- but women themselves. Afghan women are talking to each other and they have important things to say! They call for stronger solidarity, for a movement that will mobilize men and women inside the country, and for a long-term vision and fight.

Coincidentally during this week, the first issue of Rastan (Awakening), a women’s magazine aimed at reaching female audiences and raising solidarity was also published. Efforts like the event organized on March 4th and Rastan are examples of the beginning of a genuine Afghan women’s movement that needs national and international solidarity and encouragement. According to Dr. Alema, the focus on creating a unified women’s movement has been an essential part of Women’s Political Participation Committee’s work. “Two years ago, the statement we produced for International Women’s Days argued that the time for a women’s movement had arrived."

Is the World Listening?

Afghan women are speaking up for themselves and defining their struggle and priorities, is the world ready to listen for a change?