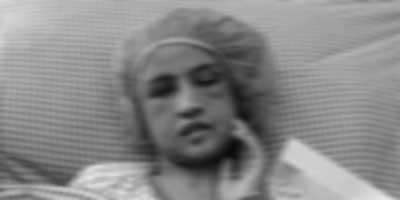 Today we visited Sahar Gul again. She was feeling better.

Two therapists talk to her daily to help her recover emotionally and mentally.

We talked to her, joked with her and applied nail polish to her new nails. She has seen her nails pretty after six months of torture during which her nails were pulled out of her fingers.

"I held her hand and could feel it shaking. I talked to the doctors; there were no psychologists or therapists among them. After speaking with her for a couple minutes, I felt that she needed one immediately, but mental health is rarely considered important here. I promised to come back and bring more things for her. I smiled and hugged her..."

Bought and imprisoned by husband

After being imprisoned and tortured by her husband and in-laws for five months, Sahar Gul, a fifteen year-old Afghan girl from Badakhshan, is being treated in a hospital in Kabul now. She was married, in fact sold, to her husband, by her brother, in exchange for the equivalent of five thousand dollars earlier this year. The brother had owed some money to someone from the district. The husband had been married before and the ex-wife had gotten divorce, a very uncommon thing to do in rural areas of Afghanistan. The fact that she had been divorced is in itself a sign that he must have made life intolerable for his previous wife as well; otherwise, because of the shame that is associated with divorce in this country, she would not have asked for divorce. After buying her, the husband imprisoned Sahar Gul in his house in Pul Khomri and did not even allow her brother and other family members to visit her until they went to the police and the police raided the house to get Sahar Gul out of there.

After five months, when the police found Sahar Gul, she was locked up in the dark bath of the building. She had been burnt by cigarettes. Parts of her body had been removed. Most of her hair had been pulled out of her skull. She was beaten several times a day. And she suffered from being under-weight because of being nearly starved to death. The husband, and the father-in-law, mother-in-law and sister-in-law had all engaged in torturing her, but only the mother-in-law and her daughter have been imprisoned. The men involved in the case ran away before the police could get them. Sahar Gul was brought to Kabul for treatment.

A visit by Afghan women's group

A group of us went to visit her on Friday, December 30, 2011. Only two of us were allowed to go into her room and talk to her. We brought with us some food. The doctors, rightly-so, did not allow photography, because of how horrific her appearance was. She looked physically weak, but when I asked her how she was feeling, she smiled faintly and said “khub (good).”She had little hair on her head and her skin was filled with black, purple and red marks. She was wearing a thin tan dress that was huge for her frail body. I held her hand and could feel it shaking. I talked to the doctors; there were no psychologists or therapists among them. After speaking with her for a couple minutes, I felt that she needed one immediately, but mental health is rarely considered important here. I promised to come back and bring more things for her. I smiled and hugged her and said that she will be fine, even though in my heart, I was worried. She said she wanted eggs.

After talking to her, we spoke with her father’s relative, the only person who was staying with her in the hospital. He told us the entire story, but did not clarify why she had been tortured. BBC Persian has written that she was tortured because she refused to work as a prostitute, which the husband and his family wanted her to do.

As we were walking away from the relative, he promised to update us and let us know if Sahar Gul needs a place to stay or someone to take care of her. The Ministry of Women’s Affairs is handling Sahar Gul’s case. So far, they have not allowed most of the press to talk to her or get more information about her and it is not clear what will happen to her after she is out of the hospital. We visited her again.

Over half of Afghan girls are child brides. Millions suffer similar fates to Sahar

While Sahar Gul’s case might be an extreme, I believe that most Afghan women do not live in much different conditions. Over 57% of Afghan girls are married before the age of 16 and the bride price ranges from five thousand dollars to fifty thousand dollars. More than 85% of Afghan women face domestic violence. Maybe they are not burnt or beaten, as much as Sahar Gul, but there is no way to fairly measure the amount of harm and pain violence causes to each woman. While Sahar Gul is fortunate enough to finally be lying on a bed in a hospital, with a lawyer and several doctors assisting her right now, there are millions of women with similar fates who will never be heard of.