West Nile - Safe from the LRA, But the Poverty Goes On 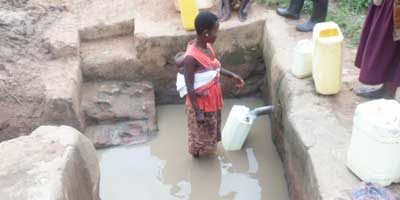 Claire Miller, a volunteer with EACO Uganda, spent a month living and working in Uganda in the summer of 2012. Claire shares her perceptions and experiences:

On the Road to Malacha

After a nine-hour bus journey from Mukono, we arrived to a warm welcome on the dusty streets of Malacha [in West Nile, north-west Uganda] just as it was getting dark. EACO Uganda works in Malacha in collaboration with Good Hope Of The Marginalized (GHOM).

The scenery on the journey was just incredible - rolling valleys, lush, green trees, mountains in the distance. There was even the opportunity to spot wildlife as we passed the national park; the elephants were the most impressive.

Every time the driver stopped the bus along the way, the “moving market” approached us with a variety of local foods: roasted matoke and maize, chipati, nuts, all different types of dried fish, live chickens,  meat on sticks that looked incredibly scary, and cold drinks. The women carried the items on their heads, the men shoved their produce up to the window to entice customers.

The odd beggars came to the window with a heartbreaking, but hopeful, look in their eyes – one of which was an elderly lady with her fingers missing – clearly a victim of the Lord's Resistance Army (LRA); she could hardly keep hold of the little change people had given her.

As we approached Kaluma Falls, the cheeky baboons were sitting out in the road begging for food, the falls and the rushing river looked so beautiful as we passed over the bridge, watching out for the increasing number of primates that were gathering.

My first impression of Malacha was darkness.

There was no power except in the few places that have solar panels. As we drove through the village on a boda boda (motorcycle) I was surprised to see men, women, and children walking the streets in pitch black darkness carrying various items, running and playing with no problems at all.

In fact, the only disturbance seemed to be the lights of our boda boda; the people shielded their eyes as we passed by. I guess if one grew up in an area with no lights, one's eyes would adjust and enable one to see better than a person that has always had street lights and electricity.

We arrived at Alice Injikulu's guest house and I was surprised at the size of the place. Alice is the Project Coordinator for Good Hope Of The Marginalized (GHOM). There was the main house, consisting of bedrooms with comfortable mosquito-netted beds and the living room; surrounding the main house were many round mud huts with grass roofs where Alice's family live. They kept goats, hens, and pigs, I was lucky to see the three week-old piglets running and scratching around the pig pen. Huge eucalyptus trees surrounded the property along with banana, maize, and sweet potato plantations.

Recovering from Fear and Terror

After a delicious dinner of beans, cabbage, rice, and tea, I sat up listening to Shadrak (founder/executive director of EACO Uganda), Alice, and Harriet –  Alice's sister, speak of Africa. I heard tales of human blood sacrifice in Mozambique, witchcraft in Sudan, and the Lords Resistance Army (LRA) here in North West Uganda.

Alice told me about what the dangers of travelling the route we did were like 10 years ago. Buses would be hijacked, people were killed, girls kidnapped and made to be rebel wives, boys forced to kill their parents –  then initiated as child soldiers by killing then eating another child.

People’s mouths were padlocked shut, pregnant women’s bellies were sliced open. Alice said this whole area was wiped clean: not a single soul could be found as survivors of Kony's terror fled to Congo, Sudan, and Internally Displaced Persons (IDP) camps around Uganda. When they returned, their houses had been burned, as had most of the village; they rebuilt from scratch, only to be terrorized once more by the LRA.

She spoke of the silence on the buses as people feared the soldiers coming from the bush begging for food or ambushing them, on two occasions the rebels emerged from the bush and stopped the bus she was in, once to demand food, a second time to simply hitch a ride.

These people lived in fear and the community is still paying the price as people are still afraid to come here, despite the area being completely safe for over five years now.

Lacking Resources in the West Nile

In the morning I was introduced to a group of Alice's clients, mainly widows suffering from HIV, and all living in extreme poverty. They brought along a palm leaf and demonstrated to me their weaving techniques for mat and basket-making.

We visited the homes of a lot of the women and one man whose wife died and left him to take care of four children. There are a few reasons why I met mainly women in Malacha.

One reason is the stigma that surrounds HIV: people are ashamed to admit their status, and it's the proud men who will stay at home hiding –  rather than admitting their condition and asking for help.  Another reason is it's usually the man who will cheat on his wife, and therefore, he will have contracted the disease sooner. Whatever the reason, the man will generally die before the woman.

Whilst visiting their houses, I came to understand that these women have no money at all, and are struggling to house and feed their children let alone take them to school; they don't even have beds or blankets –  they sleep on the floors of their mud huts.

We visited the local bore hole (where people get water) that services the community, and the gentleman that lives close by who takes care of it. Each morning he opens the barb-wired fence that protects the water from wild animals and intruders, and each evening he locks it. The same gentleman has bee hives in the nearby forest, a project that he started himself. Shadrak was able to talk with him regarding EACO’s project and he agreed that he would be happy to host the bee hive project when they get the funding.

Although Alice’s organisation is doing all they can for this community, they lack the funding needed to start their projects. These people live in such a rural area and they rarely get visitors, so they lack the outside support that other more centralized organizations would receive.

I decided to fund an art and craft project for them so they can buy materials from the local markets.

They will make baskets, mats, tablecloths, and jewellery to sell at the local market, which will generate an income for the group.

In the afternoon Shadrak and I took a boda boda to visit Alice's sister, Betty, who runs a guest house. Koboko is a town which is on border of Uganda and South Sudan, so people came here to seek refuge. Betty took us to a church where refugees used to sleep, as well as a school for the child refugees.

We also passed through a local primary school; on the grounds were signs like “No inappropriate touching”, “Test for HIV”, “Practice safe sex”, “Use condoms”, “Do not take money as a bribe”, etc., which to me was quite shocking to see in areas where innocent children were playing, but I guess it just demonstrates the severity of the situation here.

Overall, visiting the West Nile has been a learning experience for me.

The people, language, culture, and landscape varies so much to that of central Uganda –  I feel that every tourist and volunteer should to take the time to visit and experience it firsthand.

West Nile sub-region (previously known as West Nile Province and West Nile District) is a region in north-western Uganda that consists of the districts of Adjumani, Arua, Koboko, Maracha-Terego, Moyo, Nebbi and Yumbe. The sub-region received its name from being located on the western side of the White Nile. Military leader and former president of Uganda, Idi Amin, first gained prominence in the West Nile region before staging a military coup and usurping Milton Obote in 1971.