Gulu: Still Recovering from the Aftermath of the LRA 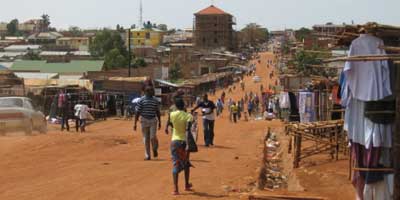 Many in Gulu are stressed to ensure their basic needs are met.
Photo source: Peace is Possible - The Gulu District’s New Initiative

EACO volunteer, Claire Miller, travelled to Gulu in Northern Uganda, to talk to the people there

"Gulu has now been safe for over five years, as the LRA left Uganda and moved to the Democratic Republic of Congo (DRC)....

Much work remains to be done, from rehabilitating the former child soldiers, ...encouraging the wives of the rebels and their children to move out of the bush and letting them know that it’s safe to come home, to providing artificial body parts to those who lost their lips, ears, fingers and limbs to the LRA."

Gulu has been so refreshing for me. It's a small place, but there's lots going on: the locals are used to westerners due to the number of American aid workers, students, and western-run NGOs, so I attract much less attention then what I have become accustomed to over the past three weeks, I can walk around in the dark with my iPhone in my hand and not feel the slightest bit threatened.

EACO Uganda does not yet work in Gulu, but hopefully, soon.

A friend put me in touch with a local man named Ojara. For the short time I was there he showed me around, taught me the history of northern Uganda, and allowed me to become a part of his life.

On our first meeting, he proudly presented me with the papers declaring his NGO official: the Alliance for Community Development.

His work is similar to EACO's, but rather than focusing on empowering women, they're empowering the entire community that has been affected by the war. There are a lot of widows and orphans amongst that community, but also alot of men that haven't been educated and haven't had to earn a living on their own as they've been living in Internally Displaced Persons (IDP) camps for so long –  and everything they need has been given to them.

Ojara's own personal story is incredibly sad. He lost his father when he was 14; he was brutally murdered outside the family home. His mother died shortly after from a heart attack. The orphaned Ojara and his brother were looked after by an uncle whose grave is next to Ojara's two children.

The number of people buried at the family home exceeds the number of deaths I have known in my whole life.

The majority died from HIV AIDS –  the exception being the parents, and the uncle who died of alcoholism and his two children who were burned when his home was torched along with his identity documents and education records –  his life records. Ojara now has four of his own children along with two orphans that he's taking care of.

We hired a boda (motorcycle)  for the day and drove around the villages. The first thing Ojara pointed out to me was the village where Alice Lakwenas lived; she was head of the Holy Spirit Movement – a rebellion against the Ugandan government in the 1980s, and cousin to Joseph Kony, leader of the Lord's Resistance Army (LRA).

To think such evil lived there...

We stopped at a number of massacre sites and areas where traps were set, stopping on the side of the road and pointing to the areas just next to us in the bush where the rebels would have been hiding out. The very road we were standing on is where these innocent people were violently captured or killed. We drove through a crossroad –  “hundreds were killed on this very spot” he yelled over the noise of the motorcycle engine.

A chill ran down my spine just thinking about the blood that has been shed here so very recently.

As we drove past villages, Ojara named the IDP camps that used to be there and named his friends who were living there –  some of whom are no longer with us.

“This was where our home was in the camp”, he announced as we passed what looked like a standard village with circular mud huts.  A little way up the road, we reached an erected cross, a monument to mark the area of a mass killing. Ojara spoke of the night it happened:

“They heard the gun shots and screams from their camp and ran towards the city.

“The children would travel every night from the villages and camps to stay in various sleeper halls set up by the government, the Peace Corps, etc. These places were to protect the children from being captured and forced to serve in the army as child soldiers.

“For the rest of the people, there was little protection offered so they headed into the bush for the night.”

Ojara said those nights were the longest and morning took ages to arrive.

Gulu has now been safe for over five years, as the LRA left Uganda and moved to the Democratic Republic of Congo (DRC).

Ojara teaches at a local primary school but also does a lot of work within the community, including training a Taekwondo class and teaching scouts their cultural music and dancing, in which visitors can watch or join in.

Despite the atrocities that happened here, Gulu is such a lovely place.

There is still a strong support of NGOs working here despite some of the larger ones moving on, now that peace has been declared.

So much work remains to be done, from rehabilitating the former child soldiers, moving people back to their former villages, encouraging the wives of the rebels and their children to move out of the bush and letting them know that it’s safe to come home, to providing artificial body parts to those who lost their lips, ears, fingers and limbs to the LRA.

Gulu feels like the real Uganda; nothing can compare to visiting these areas and hearing local stories from people who actually experienced the war and terrorism that affected this area.