Aya Chebbi: The Right To Be A Woman 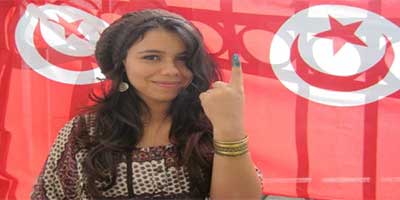 We come from all around the globe. We emerge from different backgrounds. We speak different languages, and hold different nationalities. Yet, unfortunately, as women we suffer from the same inequalities and gender based-violence everywhere in the world.

This violence begins early for some of us. It starts while we are still floating in the safety of our mother’s womb when outside the father, the family, and the community declare that they prefer a boy - a son. It continues up until we rise into adulthood and find ourselves judged and punished by society for the sole reason that we are women.

In Tunisia, women are the victims of this violence though we stood up for dignity and freedom, side by side with men, for the same cause.

During Tunisia’s revolution, I saw the many different kinds of violence to which women might be subjected. A Woman’s body becames a threat to her life. In the aftermath of the ex-President fleeing the country, one of the first outcomes was the kidnapping and raping of girls.

This behavior became so normalized that men and boys even joked about it on Facebook. They said: “if a girl today isn’t kidnapped, it means that they’re not beautiful.” It’s funny for these men because they've never experienced rape or how much it can affect the psyche, never mind the body.

Since then, the police has been taking advantage of the chaos. They took every opportunity to sexually harass women – from looking, to staring, to touching, to raping and beating and insulting.  I can’t call these attitudes anything but animalistic. Some police acted in gangs to inflict violence on women as happened this past September.

Even before the revolution, I didn’t feel that I could walk by myself securely in the street at 3am, for instance, without being afraid of being insulted or raped. During last year unrest, I would be lucky not to be beaten or raped on any given day!

This violence is worldwide. Three days ago, I watched a documentary entitled “Bride Kidnapping in Kyrgyzstan”. It shows that even when people say that they want to make women happy, they terrorize them! It is called an amusing tradition, but it is not funny at all. In fact, from Kyrgyzstan, a tiny country in central Asia, to the rest of the world, women suffer from different forms of gender-based violence either under the name of tradition and culture, or under the pretext of religious teachings, or during and following conflicts, wars or political and economic crises.

This violence is verbal, and surrounds us in the whispers of our society. As a woman, I have heard all kinds of sexist statements even when visiting the supposed democracies of the world that guarantee women’s rights. The same kinds of jokes are everywhere: an American friend said to me some time ago, during an innocent conversation on driving: “you’re a girl, you can’t drive!” I face the same sexism in my home country, Tunisia. The same stereotypes: my ex asked me once our relationship got to engagement: “Do you know how to cook?”

This sort of question seems normal, since most girls I suppose have been asked this question by their boyfriends sooner or later – but try reversing the situation. It wouldn’t sound like an ordinary question if we ask them the same. Why? Is this women’s role in life? I still call these men and boys my friends, however. I refuse to simply get depressed from patriarchal attitudes. Instead we should try to change perspectives, one person at a time, to arrive at an understanding of who women are and what our role in society is today.

This is gender inequality we face and challenge every day in school, at home or at the workplace - only asking for work valued equal to men, the right to drive like men, or lead our businesses, or choose our partners as men do. I feel that these issues can be solved through dialogue and debate without engendering major losses - but what about the greater sexual and gender based violence and its effects on women? How do we address this?

We should not remain the victim anymore. It is also our role as women to raise awareness, to protect our fellow women and to help them understand that they are born with unreliable rights and freedoms.

Blogging is one way that I use to empower women, to give them a voice and reveal the violations that are otherwise hidden away in different corners. Blogging for me is the practice of 'citizen journalism' which is needed in every community.

One of the first articles I posted was about women’s experiences , simply because we need to realize; it is a daily experience as a woman to talk about my issues and violations. I have a voice, and now I am bringing it out of the silence.

Women first to rise up high in revolution

It has always been a challenge to get women talk openly about their experiences, especially sexual violence by police and authorities. Women have been taught that both law and society will take the side of the violator and not the violated, where she is a woman. This continues into today – think again of the Tunisian woman that was recently arrested and charged with public indecency. And why? Because she had been gang raped by police officers!

Despite these hurdles, I am proud to say that Tunisian women were and still actively participating in our revolution. Women were among the first who rise up high our revolutionary slogans and they have been part of all crucial moments. We have been the protesters, the journalists, the volunteers, the elections observers, the campaigners… all this in spite of the violence we live in fear of from the bus station till arriving to the demonstration square.

I would like to leave you on a hopeful note. I was once asked by a Yemeni friend, “if you were born again would you choose to be a man or a woman?” I answered immediately: “I would be a WOMAN!”

A proud woman proves herself every day and changes her community. YOU should also be proud of being a woman. It is not your sex that you should change but the society that you live in.

Aya Chebbi is a dedicated Tunisian activist and a founding member of United Women For Peace.

Extract from:  'Do you object to equal share of inheritance in Tunisia? WHY?' by Aya Chebbi

CEDAW is the Convention on the Elimination of All Forms of Discrimination against Women , that Tunisia has signed  in 24 July 1980 and ratified in 20 Sep 1985 but with reservations to opt out of certain provisions. When ratifying the treaty, Tunisia has made a general declaration stating that:

" The Tunisian Government declares that it shall not take any organizational or legislative decision in conformity with the requirements of this Convention where such a decision would conflict with the provisions of chapter I of the Tunisian Constitution". Chapter I establishes Islam as the state religion. So by removing the declaration, no state would use its own constitution as an excuse for not complying with international standards.

Many of the reservations limited women’s equality within their families, and now their removal finally recognizes that women are equal partners in marriage and in making decisions about their children. These include passing on their nationality to their children, rights and responsibilities in marriage and divorce, matters relating to children and guardianship, personal rights for husbands and wives with regard to family name and occupation, and ownership of property.

Tunisia's laws have provided women a measure of equality largely absent among its neighbours. We, as women, have one of the most progressive personal status codes in the region. In fact, polygamy is banned and Tunisian women have equal rights in marriage and divorce. In addition, the minimum age for marriage is 18 for both spouses and both must consent to the marriage. However, we still do not have a comprehensive law on family violence, though we have some very strong provisions in the penal code criminalizing domestic abuse and marital rape.

Women and girls are still not entitled to an equal share of their fathers' and husbands' estates. Brothers get more of the share, and sometimes inheritance can be divided among other relatives, such as male cousins, leaving girls and women with a much smaller amount. According to article 58 of the personal status code , judges can grant custody to either the mother or the father based on the best interests of the child, but prohibits allowing a mother to have  her children live with her if she has remarried. No such restriction applies to fathers. Would you call that justice?  I can't but call these laws, discriminatory laws. I think the personal status code has settled discriminatory provisions more than guaranteeing equality for Tunisia’s women.I believe, it should always be a case by case study.The logic beyond giving women half of the man's share is the fact that men are supposed to carry on the financial burden in the family.However, are all men today taking the responsibility of their families needs? are all brothers taking care of their sisters?are all husbands meeting their duty of financial responsibility?

I believe we should proclaim our(your) commitment to advance women’s rights. We should call for equality and ensuring basic rights and freedoms for all citizens without discrimination. We(you) should eliminate all forms of discrimination against women and try instead to protect their rights.