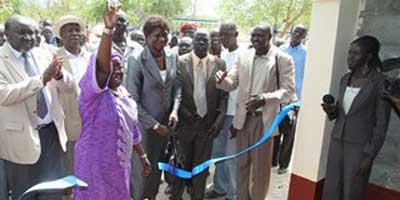 On 9 July 2011 the world witnessed the birth of a nation — South Sudan, Africa’s 54th country. In an interview with UN Women, South Sudan’s Minister of Gender, Child and Social Welfare Agnes Lasuba weighs in on the country’s independence and what it means for women. 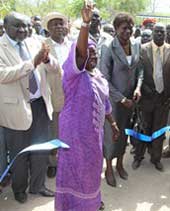 What does South Sudan’s independence mean for women?

South Sudan means a lot for women because they went through hardships during more than 20 years of war.

For those women who lost their husbands and sons, they are overjoyed because their spouses and sons did not die in vain, they fought for freedom and South Sudan got freedom. To women it also means peace and stability. It is time for them to develop themselves because during the war they could not progress.

The independence will bring basic services, like access to health, education, sanitation and clean drinking water to name a few.

What role did women play in achieving South Sudan’s independence?

The women of South Sudan played various roles to achieve independence. During war they picked up arms. Others were mobilizers and others were taking care of the wounded, the sick and the elderly. And others were yearning for peace and they took it upon themselves to lobby other people and other countries, so that there could be peace for them and for their children. Although few women were involved in the Comprehensive Peace Agreement negotiations, a significant number of women voted during the South Sudan referendum in January 2011.

Why is women’s political representation and participation important?

Politicians make many decisions for their countries and women are part of any society. Hence, they should have a say on issues concerning them and their children. So it’s important for women to be part of politics, because they can echo the needs of women. Also they can speak on issues of rape and human rights abuse better than men because they are mainly the victims.

Years and years ago being in politics was seen as a man’s privilege only and no women would go into it because they would be labeled as bad women. After going through the struggles of the liberation war, this changed. From 2005 to 2010, women made up 28 of the 170 parliament members in the Southern Sudan Legislative Assembly. From 2011 to 2015 women made up 52 out of the 170 honorable parliament members. The number of women nearly doubled. I hope in the next elections in four years, the number of women will go up to one hundred so that they — as a majority in parliament — put in place laws that are appropriate to protect women, such as for child rapists to be imprisoned for life.

What are some of the main challenges women face in South Sudan?

Women face many challenges, such as poverty, low literacy rates, maternal mortality and domestic violence. For women to move on, they need economic empowerment, because a large percentage of them live in poverty. They need political empowerment to speak on behalf of women. They need civic education to be more aware of national and state issues. On top of this, some men perceive gender equality as if it is a women’s issue. We are trying to work hard to recruit men to be ambassadors on gender. This is because if gender and human rights are not implemented and women and girls are treated in the traditional way — where 13- or 14-year-old girls are married and are not given opportunities to education and employment, for instance — South Sudan will remain underdeveloped. Women are developers. They even develop men from the womb up to adulthood. Therefore, women should play a key role in nation building.

The Ministry of Gender, Child and Social Welfare in partnership with UN Women in South Sudan have started to work together to tackle some of the issues on, for example, capacity building, gender mainstreaming, gender-budgeting, literacy and other issues outlined in the UN Millennium Development Goals.

What are your hopes for South Sudan’s women moving forward?

My hopes for the women of South Sudan are many. I hope that by 2015, women of South Sudan will be 50/50 with men in parliament. I also hope for more women in South Sudan to be literate. I am happy to say for our young generation, we are already seeing an increase. In 2006, the Ministry of Education came out with a “go to school” campaign. President Salva Kiir also echoed the girl child education in most of his speeches. Now the ministry tells us there are more girls registered in primary school than boys. In the long run, I believe girls can catch up with boys.

In all the challenges that women in South Sudan are facing, women cannot resolve them alone. We are now Africa’s 54th country, Africa’s youngest nation, and are about to become the UN’s 193rd Member State. Overnight we cannot claim that we don’t have challenges and that we know everything. We also cannot expect to compare ourselves to countries that have been in peace and stability for a long time. That’s why in the past five years we have been working closely with UN agencies and other partners to address some of the challenges. Most of them are mentioned in the UN Millennium Development Goals. If it’s poverty, it’s there. If it’s education, it’s there. If it’s maternal mortality, it’s there. As a new nation we wish to get up and move successfully without too many hiccups. We call upon good wishers to join us in developing South Sudan.