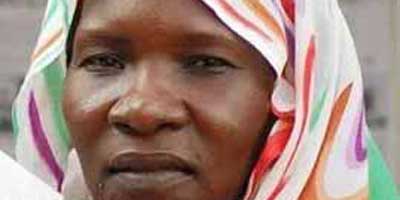 Jalila Khamis Koko has been detained without charge for more than eight months, which exceeds the pre-trial detention period prescribed under international law and Sudanese national law. Jalila’s prolonged detention undermines her right to a fair trial and puts her at a great risk of torture and other ill-treatment.

There have been contradicting accounts on Jalila’s case indicating a persistent uncertainty on the status of her detention and on the progress of her case. No official charges have been issued against Jalila. However, the National Security Services (NSS) have reportedly pressed charges against her on six criminal counts, five of which fall under the category of crimes against the state, including two which carry the death penalty. Since then, the criminal prosecutor has been renewing her detention every week, so that she can be questioned.

Jalila Khamis Koko is a member of the opposition party Sudan Peoples’ Liberation Movement – North (SPLM-N), which was banned in September 2011. She is a member of the Nuba ethnic group from Southern Kordofan. She was arrested on 15 March 2012 at her home in the capital, Khartoum, by agents of the National Security Services (NSS). She was transferred to Omdurman prison, after spending three months in solitary confinement in the NSS detention centre, where she has been detained ever since. During this time, her physical and mental state has considerably deteriorated.

The detention of Jalila Khamis Koko appears to be part of a pattern of detention of SPLM-N activists and intellectuals, as well as of people of Nuba descent that the Sudanese authorities believe are affiliated to the SPLM-N.

The Coalition is very concerned about Jalila Khamis Koko, who is held solely for her humanitarian work and for the peaceful expression of her views.

We demand the government of Sudan to:

Ensure Jalila Khamis Koko is not tortured or otherwise ill-treated;

Stop the harassment and intimidation of SPLM-N activists and intellectuals, as well as people of Nuba descent.