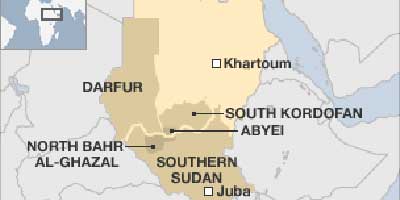 Activism in the face of endless war

By Louise Hogan, for Safe World for Women. October 2012.

Earlier this week, the presidents of Sudan and South Sudan, Omar Al-Bashir and Salva Kiir, signed an African Union sponsored agreement which allowed for the peaceful resumption of oil production in South Sudan and the securement of the countries shared border. The agreement was disappointing however, if not surprising, given the lack of agreement on other important issues such as the on-going conflicts in the Sudanese state of South Kordofan which has caused hundreds of civilian deaths and led to the displacement of thousands more.

The most recent conflict in South Kordofan erupted in June 2011. As part of the Comprehensive Peace Agreement of 2005 (CPA), which ended Sudan’s long running civil war and eventually led to the secession of South Sudan in 2011, “popular consultation” processes were due to be held in three contested border provinces to determine whether their residents wished to remain part of Sudan, join an independent South Sudanese state or at the very least allow for some degree of self-governance. These three provinces-Abyei, Blue Nile and South Kordofan- are home to residents who largely identity- culturally, ethnically and politically- with South Sudan. They are also however rich in minerals, oil and natural resources. Sudan refused to cede jurisdiction over the regions.

Fighting broke out in Kadugli, South Kordofan’s capital, in June 2011 after a much delayed local election returned a contested verdict. The conflict escalated into all-out war and violence has spread to the neighbouring province of Blue Nile state. The Sudanese Armed Forces (SAF) have consistently shelled civilian towns and villages and allegedly employed the use of cluster bombs. Late last year, the SAF even bombed Yida refugee camp in South Sudan. Nearly 170,000 refugees have fled into neighbouring South Sudan and the United Nations Office for the Coordination of Humanitarian Affairs estimated that by June 2012 665,000 people were internally displaced. Conditions for the refugees are so bad, Medicines San Frontieres released a statement in August revealing that at least five children were dying a day in Yida camp alone, calling the situation “appalling”.

The humanitarian response to South Kordofan has been extremely limited as Khartoum forbids aid agencies, or indeed journalists, from entering the province. Efforts so far have been concentrated on assisting the thousands of refugees who have fled across the border to neighbouring South Sudan.

Zeinab Blandia, founder of Ru'yaAmid the international aid agencies operating in the area is a small NGO from South Kordofan named Ru’ya Association. Formed in 2001 by a group of university educated women from South Kordofan, Ru’ya has a history of working with and between local communities to further peace-making efforts in the regionThe organisation is notable due to its unconventional, but effective, methods and its remarkable successes, including sending four illiterate grandmothers from rural South Kordofan to India to train in solar power technology.

Ru’ya began their work amongst refugees from South Kordofan in the Sudanese city of Omdurman, initially focusing on strengthening bonds between women from different communities in an attempt at peace building. Later, Ru’ya moved its operations to Kadugli and continued to focus on women as peacemakers, both within and between communities. It established solidarity groups which allowed women to support each other in their efforts at bringing peace to their communities and micro financing programmes to assist the economic rebuilding of their conflict ridden state. Ru’ya achieved remarkable success in a short space of time, to the extent that its founder, Zeinab Blandia, was named a Woman Peacemaker of the Year by the prestigious Joan B. Kroc Institute for Peace and Justice at the University of San Diego in 2009.

Ru’ya’s success at building peace did not go unnoticed and when conflict broke out last summer, Ru’ya’s staff were specifically targeted by armed militias. The staff managed to flee to Khartoum but their office was ransacked and completely destroyed. Khartoum too proved to be unsafe and Ruy’a’s staff fled once more to Kampala, where they spent a few months regrouping before attempting to rebuild their organisation amongst refugees from South Kordofan who are residing in South Sudan. Ru’ya released an in depth study on Yida refugee camp earlier this year, focusing on the situation of women. It is believed to be the only report from an indigenous organisation working on the ground.

Other female activists from South Kordofan have been targeted by the security apparatus of Bashir’s regime, with women human rights defenders being imprisoned on trumped up charges and even shot on their own doorsteps. The conflict in South Kordofan shows no sign of abating, with re-escalating in September, after a brief lull in fighting during the late summer. Despite numerous pledges, Bashir shows no signs of allowing humanitarian aid into the embattled province and thousands of his own citizens face starvation and remain under constant attack.

The women human rights defenders of South Kordofan are truly operating with no protection whatsoever and yet they bravely continue with their work. It is up to us to highlight the amazing work they do and continue to put pressure on Sudan’s government to open corridors for humanitarian assistance.