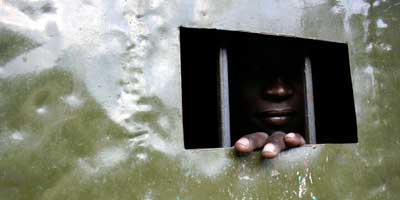 Four minors are among nine people who have been sentenced to death for a carjacking in Khour Baskawit in South Darfur. The case has raised fresh concerns over protection for children's rights in Sudan.

At 17, Ibrahim Shrief Yousef, is the eldest of the four children sentenced. Abdalla Abadalla Doud and Altyeb Mohamed Yagoup are 16 and Abdarazig Daoud Abdelseed is just 15 years old.

The nine were sentenced to death on Oct 21, found guilty of armed robbery, offences against the state and fomenting war against the state, all serious crimes under the Sudanese Penal Code of 1991. The prosecution alleges they are affiliated with the Justice and Equality movement (JEM), the largest rebel movement in Darfur.

Sudan is a signatory to the U.N. Convention on the Rights of the Child, which prohibits the execution of minors. In line with this, Sudan reformed its laws in January 2010, raising the age at which an offender can face capital punishment from 15 to 18.

But according to the Sudan-based Africa Center for Justice and Peace Studies, the reformed Child Law contains an ambiguity, defining a child as a person under 18, unless "they have reached maturity under other applicable law".

This opened the way for the accused to be tried as adults under the Penal Code, which defines a person as an adult if they have reached puberty. In addition, the charges faced by the Khour Baskawit group are considered Huddoud, offences against acceptable Islamic behavior. Other Huddoud crimes include fornication, apostasy, and the consumption of alcohol.

Hamed Emam, an expert at the National Centre for Legal Work told IPS that although armed robbery is defined as Huddoud, the court has overlooked the fact that a child under the age of 18 is not responsible under the criminal law.

"The court based the sentence on the physical appearances of the minors. However, the claim that we follow Shariah law regarding such crimes, ie Huddoud, is inaccurate since the teachings of the prophet emphasise that under the age of 18, a person is a minor," said Emam who's PhD dissertation focused on juveniles facing the death penalty in Sudan.

Mohammed Al Hafiz, an independent human rights lawyer and former judge, explains that minors accused of criminal activities are exposed by ambiguities in the Penal Code as well.

"Article 8 [of the Penal Code] states that only a responsible individual who has reached the age of puberty can face capital punishment, but puberty is a loose term. It could be reached at 12, 13, 14 or even 15. The article fails to define an age for minors."

According to a source in the Ministry for Social Welfare, speaking on condition of anonymity, any minor under the age of 18 should be sent to the Juvenile Corrective Services Centers either in Jeriaf, where there's a centre for girls and boys, or in Bahri where a centre houses boys only.

"Even if this minor committed a major crime such as murder and robbery, they are still sent there, where the state takes care of them for up to five years."

But as they were tried in normal courts, the minors in Darfur will not enter the corrective services programme unless they are re-tried in juvenile court.

Al Hafiz was involved in a similar case while working as a judge a few years ago in the state of El-Obeid.

" A 17-year-old committed murder and he was given the death penalty, I voted against it and asked for the case to be reconsidered," he told IPS.

He added that the vagueness of the laws could benefit the accused if the judge is on their side, Al Hafiz believes that the judge’s decision in Darfur should be viewed in the context of the current political situation in Sudan.

"Sadly, the courts in Sudan are politicised, this case proves the point. The group sentenced to death is affiliated with the Justice and Equality Movement. If this was not the case, the sentence could have turned out differently."

Emam questioned whether the JEM affiliation was valid.

"The techniques of interrogating an accused in Sudan date back to the Ottoman days," Emam told IPS. "Police officers use fear and mental exhaustion to get information out of the accused. If they subjected these kids to this, they could’ve just claimed that they are affiliated to the JEM. It is a possibility, but it’s not always the case."

The Sudanese government has defended its law by saying that no juvenile is actually executed in practice. But the ACJPS says that the mental anguish of being sentenced to death is in itself a violation of a child's rights.

Sudan, along with Iran and Saudi Arabia, is one of only three countries to have executed a minor since 2009. In May 2009, 19-year-old Abdulrahman Zakaria Mohammed was executed in El Fasher, North Darfur, after he was found guilty of armed robbery and murder two years earlier.

The ACJPS, which is currently working on a comprehensive report on the death penalty in Sudan, joins Human Rights Watch and other groups in reviewing the case of the Khour Baskawit group and ultimately reviewing provisions intended to prevent similar cases in line with the absolute prohibition of the death sentence for minors under the Convention on the Rights of the Child.