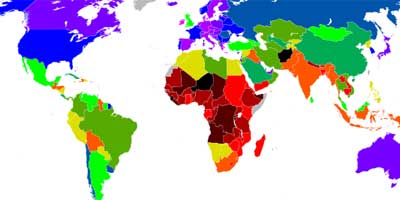 The maternal mortality data from Save the Children State of the World's Mothers report. Source: Wikimedia Commons.

South Africa seems on the surface to be a much ‘better’ and wealthier country than most. After all, it is a country blessed with an abundant supply of natural resources and boasts a variety of well developed sectors.

South Africa is also home to the Johannesburg Stock Exchange (JSE), which is the 18th largest stock exchange in the world.

The country is not experiencing any obvious conflict within and has proved its ability to host world class sporting events, such as the FIFA 2010 World Cup and the 2012 Orange African Cup of Nations.

Nationally, it is a country of abundance –  enough money and food to ensure that all its citizens are fed and receive adequate services.

The country has also taken reasonable steps to ensure that citizens rights are protected by law. Section 11 of the South African constitution states that, “everyone has the right to life”, but it is recognised that this cannot be achieved without the fulfilment of socio-economic rights. This is supported by the recognition of socio-economic rights as human rights in the country – Socio-economic rights which include the right to adequate housing, food, health care, education, social security and water are also recognised in the South African Constitution (Act 108 of 1996), along with other treaties and resolutions ratified by South Africa.

What this means is that everyone in the country has the right to have access to healthcare services, including reproductive healthcare.

Having access to has been defined as creating an enabling environment which allows people to access a particular service and this includes maintenance on the infrastructure needed; overseeing policy facilitating this access, as well as adopting various strategies to ensure that this is achieved.

The onus is placed on the state to not only respect these rights, but also to fulfil and protect them.

There is no doubt that the state has made some attempts to ensure that this right is met. Clinics across the country have been upgraded and built, with free healthcare for children under six and for pregnant or breastfeeding mothers introduced.

Why the High Maternal Mortality Rate?

According to the National Health Care Facilities Baseline Audit, released on the 19th March 2013:

“Government's health facilities audit shows most staff fail to have "positive and caring attitude" towards patients.

Seventy percent of public health facilities do not have “positive and caring attitudes” towards patients, while two-thirds do not have adequate safety measures”.

But that is not all, earlier this year City Press reported that “Most of South Africa’s public maternity wards (93%) do not have functional and essential equipment needed to keep mothers and their newborn ­babies safe”.

The report also published findings including:

And although this has a negative effect on all using the system, it cannot be denied that women in childbirth are placed in a more difficult situation than most because it is two lives at stake every moment rather than a single individual.

Over and above the physical consequences for mothers and children, the failing system is also a form of structural violence inflicted during what for most should be a special time and instead leaving unseen bruises and wounds – which are no less harmful than those which can be seen.

South Africa: The Legacy of Apartheid Lives On