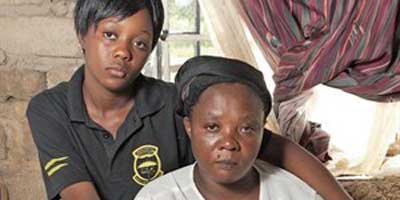 The Ramavhoya family - consumed with grief, following the suicide of their sister and daughter, who allegedly took her life because she refused to trade sex or money for a pass mark at school. Photo: Drum

A Culture of Impunity

Early in 2011, Trish Ramavhoya, an 18 year-old student, committed suicide using insecticide after failing to pass her Grade 11, allegedly because she refused a teacher's sexual favours.

For the Ramavhoya family, the culture of impunity for rape perpetrators within the justice system took away their daughter.

The courts are failing to protect victims of sexual abuse in South Africa's schools.

Sex With Pupils - a "Perk" of the Job

Court staff often encourage the signing of inappropriate “peace letters” between victim and abuser, refusing to allow the victim the chance to get a protection order and be heard by a magistrate.

Court staff even try and mediate between young victims and their abusers, refusing to allow the victims proper representation, which results in intimidation and the case being dropped. Even if victims can get to court, they are often subjected to inappropriate and invasive questioning and their applications for protection orders are often rejected.

This has a devastating effect on breaking the scourge of sexual violence in our schools, as it further fuels the culture of impunity amongst perpetrators, some of whom see sex with pupils as a ‘bonus’ of the job. It also has a negative effect on the reporting of these cases, allowing many perpetrators to get away with their abuses.

Failure to Act with Urgency

There is no doubt that there are individuals in the state, working hard to prevent the abuse of learners; however, it cannot be ignored that there is a lack of adequate systems in place to address the issue. The failure of the state to act with the urgency required to curb sexual abuse deals a double blow to victims. Not only are their rights violated, but they also face the trauma of being let down by a system meant to protect its most vulnerable citizens – the children of South Africa.

Feeding into the Rape Culture

Beyond that, it feeds into the culture of rape by further reinforcing that women and children’s bodies are not their own and can be infringed upon at whim.

According to the Department of Basic Education,“Sexual harassment and violence in schools is a barrier to learning and deprives our learners of their inherent Constitutional right to equality and dignity. It can also prevent them from full participation in education”.

Despite this realisation, the very real problem of sexual abuse in our schools is yet to be adequately addressed by the state.

Lawyers Against Abuse (LvA) and SECTION 27, a public interest law centre that uses and develops the law to advance human rights, describe this crisis as:

“Pervasive and endemic sexual violence perpetrated by staff against learners in South African schools...   A systemic failure to protect and respect the victim and to punish the perpetrator in such cases”.

The many ways in which victims are failed include:

Over and above this, even law enforcement agencies fail learners who are not only physically violated, but emotionally and psychologically, too. It has been found that police are reluctant to deal with these issues and often attempt to persuade victims to drop their case.

Police are also subjected to bribery and intimidation to force them not to investigate.

* References to 'The State' in this article are not limited to the the Department of Basic Education. It refers to any state institution or body, including law enforcement, which in any way have a role to play in addressing this problem.