South Africa: The Legacy of Apartheid Lives On 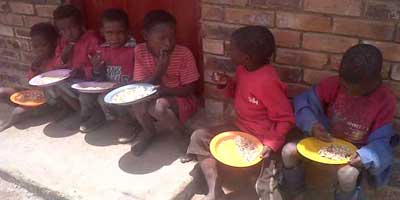 Koketso Moeti, is South Africa Correspondent for Safeworld, and founder of a community-based grassroots project in the north-west of South Africa, Operation: Rooigrond.

Dominique Roberts asked Koketso about her life, views and work. 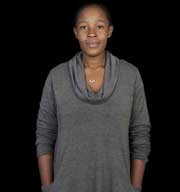 Growing up, she lived mostly with her grandmother, who she says was, “The rock of the family keeping us together”. Koketso found in strong and courageous women like her grandmother  the inspiration to becoming the woman that she is now. She states that the women who encouraged and inspired her, all had a general characteristic of, “giving so much of themselves to create a positive change, not only in South Africa, but all around the world”.

Having a passion for reading, certain writers also played a large role in encouraging Koketso to become the woman she is today. Some of the writers she names that have inspired her are Audre Lourde, Paulo Freire, Carl Rogers, and Steve Biko.

When questioned what her aspirations and dreams were as a child and whether these included having an impact on the community in which she lives, Koketso stated that from a young age she has always had an interest in human behaviour and the humanities. Talking about this she says:

“I think it is from this that my interest in community development stemmed, my need to understand why we behave the way we do and how can behaviour be modified. I find the human mind to be absolutely fascinating.”

Inequality of Wealth and Resources

Koketso says that from a very young age, she knew that something was wrong with the society that she lived in, and this was one of the things that made her decide that she could attempt to make a difference within this society. The gap between the social and economic classes bothered her. Describing these she said:

These words truly outline the inequality of wealth as well as resources within South Africa, and many people from outside of South Africa  who have observed this inequality wonder why people still choose to live here.

Koketso’s reply to this exact question is:

“I love my country and would never consider relocating –  not that I am suggesting that those who do, do not love it. I just believe that it is up to us to correct what has gone wrong, if we all leave, who will do that?”

“My children motivate me greatly. Even when challenges are met, they motivate me by driving my need to someday leave them with a world that is less cruel and more kind.

They, like all children, need not bear the burden of our mistakes, but should rather be given something better to take charge of and lead forward.”

The Legacy of Apartheid Lives on

As Koketso was born towards the end of apartheid, it is hard to ask what changes have been made from the time that South Africa officially “ended” Apartheid. In Koketso’s opinion, there have been changes and great ones, but she still feels that these changes are surface changes:

“The legacy of apartheid still lives on evidenced in the lack of addressing the social architecture created in apartheid –  something which sees black women still the most disempowered group of people in the nation, even today.”

In her opinion, the only way in which we can change our country and the inequality that Apartheid created is through a collaborative effort amongst all parties - including the government, communities and individuals. Before this process of working together will work though, she feels that it is our duty to start with the “man in the mirror” (ourselves). We need to change ourselves before anyone will want to take hands and help change what is happening outside of ourselves and within the community, says Koketso.

Through founding the community development project, Operation: ROOIGROND, Koketso has succeeded in taking hands with the Rooigrond community; this community is an informal community based in the North Western province of South Africa.

The project is aimed at empowering and educating people from this community to be able to help themselves, and subsequently break the cycle of poverty and all the after-effects that go with it. Koketso now serves as the Project Coordinator as well as the Communications Officer.

This project is built on her belief that people should always be part of the quest for solutions.

“Allowing communities to be involved and take ownership of solutions not only allows people to develop themselves, but also explore new innovative solutions to the complex problems faced.”

The children from the Rooigrond community having a mealThe main aim of the project is not only to address the psycho-social as well as socio-economic problems that the people living in this area faced, but as time went by the need for someone to take on an advocacy role became clear, and Operation: ROOIGROND added this aspect to their project.

The problems facing the Rooigrond community are not unique to this community and through seeing the changes within this specific community, Koketso hopes that other such communities will be inspired to make a change within their own community. Being a grassroots organisation, Koketso states that starting a project like this is like building a house:

“It starts with a strong foundation which is laid at the bottom- which in society means changes at local level- which in turn will affect the system as they spread.”

Against a backdrop of the adversities women face within South Africa, Koketso was asked, what, in her mind, the largest issue that women faced within the context of South Africa and also the Rooigrond community. Inequality was the answer she provided.

This inequality is on many different levels, including inadequate access to water, healthcare, and other resources which in turn lead to the cycle of poverty being continued. Despite this within South Africa, women have reached a higher status, filling leadership positions not only in the workforce, but also in the political world.

This new-found political leadership role though, is often over shadowed by the fact that there is a sense of political patriarchy within the South African political system.

Issues facing women are often “swallowed up” in Koetsi's opinion, specifically the issues of rape. “It is all about ‘the man’ rather than ‘the leader”. This she feels is clearly highlighted by the fact that domestic violence and rape statistics within South Africa are rising each year and now, are reaching crisis point. People though still “tip-toe” around these issues instead of facing them head-on.

These issues, in her opinion, are not taken seriously enough, and often this violence against women is just seen as “normal” or kept silent. Rape is one of the largest problems – corrective rapes (the rape of lesbian women in order to “fix” them of being homosexual) and the rape of young virgins in order to “cure” HIV/AIDS are on the rise and despite this, Kokestso and many other South Africans feel that not much is being done to face these issues.

When asked how she thinks these problems can be solved she stated that:

“through empowerment and education (these problems can be stopped). Often myths arise from people who seek to come up with their own explanations to the problems they face – something which has allowed misinformation to get a firm grip in our communities. People will always come up with solutions to problems they don’t understand and situations they fear to face and should be empowered enough to know how to deal with these.”

The Majority of South African Women are HIV Positive

Rape is not the only problem facing women within South Africa; 59% of South African women are HIV positive.

Koketso feels that the HIV/AIDS epidemic is fuelled by poverty and the idea that it is the duty of a “strong” woman to just take the lack of sexual freedom (that is an idea that is still largely a reality for women in South Africa).

Lack of Freedom in Sexual Choices Leads to Disastrous Consequences

Lack of freedom in women’s sexual choices leads women not to have the power of making simple choices that affect their lives (such as the use of condoms or other forms of birth control).

Again Koketso feels that the solution to the HIV/AIDS epidemic is empowerment and education; this though, has to be focused not only on women, but also on men.

“They (men) should be empowered enough to know that women are allowed to make sexual choices and should not face persecution for that and empowered enough to be a part of breaking the cycle of patriarchy which fuels the spread of HIV/AIDS amongst women.”

This idea of empowering and educating in order to solve some of the large problems in South Africa is definitely an approach that Koketso believes in. She feels that in order to make any change in people’s lives, one needs to take on a holistic approach, especially when one is trying to help empower women. This includes the psychological, socio-economic, and all other dimensions including within the context of South Africa.

A Better and Stronger Leader - Activate!

Mandela DayKoketso Moeti, is truly a South African that is striving to change the future for not only the next generation of South Africans but also the people who have lived through and are in some cases still living in inequality.

Not only is she creating opportunities from the community in which she works, but she is also empowering herself to become and better and stronger leader within the community. Though being chosen as a member of a South African program called Activate!, Koketso is taking hands with young South Africans who have the same passions as her to change South Africa and empowering themselves to do so.

'The World is in My Hand' - Koketso Moeti writes about how technology can be a force for change - Sunday Times Review, 10th June 2012

Dominique Roberts is a Safeworld Student Writer. She is studying Psychology in South Africa.

"I was born and have lived in South Africa my entire life. Despite the many challenges we as a country face, my heart definitely lies in Africa...

I plan to do my Masters and then specialize in trauma psychology (specifically childhood trauma). My love for children has been intensified by volunteering at a pre-school situated in a disadvantaged farming community...

Another ambition in my life is to help women... The social injustices and abuse they suffer have become “real” to me through getting to know many incredible women who have had firsthand experience with this type of abuse. I have seen the impact it has had on their lives, and want to stop gender based injustice for good."