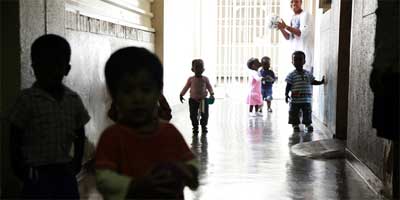 Babies in Johannesburg Central Prison are inmates by default, forced to spend their first two years with no exposure to the outside world.

Growing up behind bars can be traumatic, but some prisons work hard to improve conditions for the children of women inmates, writes Ilham Rawoot.

No matter how much effort goes into painting them, Mickey Mouse and Timothy Traddle will always look out of place on the walls of a prison.

Between the life-sized paintings of cartoon characters are the individual cells of 44 mothers who live with their toddlers and babies in Johannesburg Central Prison.

The walls are cream in colour and the pictures appear to have been painted with just three or four shades – there is little brightness here.

The last official statistics, from 2010, show that there were a total of 129 babies living behind bars in South Africa in that year. These are the forgotten.

Growing up in a prison is difficult enough.

It is mentally and emotionally damaging. But then, when they are old enough, children face being separated from their mothers and subjected to the mercy of the government welfare system, exposed to a world they know little about.

Muriel Mitchell has lived in prison with 16-month-old Tashlyn for as long as Tashlyn has been alive.

With a slight figure, black hair straightened in a high ponytail and ears adorned with large silver hoops, Mitchell (31) is unconvincing as a convicted housebreaker. She was sent to prison when she was nine months pregnant and addicted to drugs. She gave birth to Tashlyn at Chris Hani Baragwanath Hospital and was transferred to the mother and child unit at Johannesburg Central Prison three days later.

'Wake up, parade and dankie hek'

She welcomes us into her cell, a room just over two metres wide by three metres long, filled with a three-quarter bed, a wash basin and a toilet that doubles as a chair.

The bed is covered with a cream duvet and teddy bears sit on top of the pillows. In the corner is a cabinet topped with baby formula. Mitchell takes a seat on the open toilet.

"Some people think if you live in prison with a child it's easy because you get everything for free," she says, with Tashlyn sitting quietly on her lap, chubby and pigtailed.

"But it's heartbreaking. Tashlyn doesn't know about dogs or cats or birds. She has never felt car movements. All she knows is, 'Wake up, parade and dankie hek [thank you gate]'. I don't know how she is going to cope when we leave here."

Mitchell has three other children who she hasn't seen since she was locked up. "Their father told them I'm in hospital," she says.

If she was due to stay in prison for longer, Tashlyn would soon be taken away from her. But luckily for Mitchell, she will be released before Tashlyn turns two. She plans to find a job, and her children.

"I never experienced love but I love my children," she says.

The children in Johannesburg Prison spend their mornings in a playroom with three teachers, one of whom is an offender trained in educating toddlers.

The playroom has books, cots and toys, all of which are donated by non-profit organisations.

The children also have access to an outdoor play area with grass and donated jungle gyms and swings. The jungle gyms are being used as washing lines.

Yet no matter how green and soft the grass, or how new the paint on the merry-go-round, the looming brick walls offer little sense of freedom.

But the children at Johannesburg Central Prison are lucky. At some prisons, like Eshowe, in KwaZulu-Natal, the children have no access to an outside play area at all, and many prisons sport grey cement instead of grass. And at Pretoria Central Prison, children share the same space as the general female inmates.

About 20km from Johannesburg Prison, in the upmarket suburb of Parkhurst, Romy Titus, director of Babies Behind Bars - an organisation that provides prisons with basic goods such as nappies, baby food and formula - says that babies in prisons are rarely paid much attention by civil society and charity organisations.

"There are not many NGOs that work with these children," says Titus, explaining there is a stigma around supporting children who are seen as the offspring of criminals.

Titus always had a natural interest in prisons, having spent her childhood regularly accompanying her mother who worked in prisons.

"It's a difficult situation," she says. "The mother is a criminal, but she a has a right to bond with her baby. Very little thought goes into the fact that kids end up having to do time for their mothers' crimes."

Until 2008, children up to the age of five could stay in prison with their mothers, but this was changed to two when the harmful effects of living in prison became apparent.

A number of studies have been done, both locally and internationally, on the effects of children living in prison, many of which show that children are clearly mentally and emotionally harmed by the experience.

Raised by everyone, good or bad

Nonceba Lushaba sees the harsh realities behind these theories. She is the director of Phoenix- Zululand, an organisation that runs a restorative justice programme for women in Eshowe Prison.

"In prison, children don't see men, and they have no fatherly figure in any sense," she says. "When contractors come in, they see their mothers desperately try to get these men's attention, so they believe that that is how men and women are meant to interact."

"The kids are raised by everyone and exposed to everyone, good and bad. They often see their mothers get reprimanded or torn to shreds by the warders, which has a negative effect on their self esteem. There are no books, no TVs, no toys."

The correctional services department is trying to find alternative means of imprisonment that would be less detrimental to the children.

Pollsmoor Prison in Cape Town has moved towards a model that is becoming popular internationally, where mothers and children are being moved out of the traditional prison facility into a more "homely" environment. In August last year, the prison opened a house on the premises, a kilometre away from the cells that house the other prisoners, where the mothers and their children live in bedrooms and can play in a garden.

But what happens to these children when they leave the prison environment? Many struggle to adjust, knowing nothing outside of the institution's walls.

Scared of the men

Beauty Ncube says it hurts her that she brought one-year-old Karabo* to prison when she was sentenced for shoplifting. She, too, sits on her toilet, which she has covered with a blue and yellow doily. On the wall is a grey cow jumping over a yellow moon.

"Now he only knows people in blue and brown uniforms," says Ncube (32).

She has customised her own blue uniform into a mini shirt-dress. All the inmates are given the freedom to personalise their uniforms.

When Karabo turns two, he will have to go to his father in Zimbabwe, even though he has had almost no interaction with him.

The social worker at the prison, Tshililo Masonono, says the women have little support from their babies' fathers, and the fathers seldom visit, even on weekends and holidays.

Three cells down is Xoliswa Ditolo, who, at 25 years old, still has nine years to serve for murder.

Ditolo came to Johannesburg Prison when she was one month pregnant, and described the experience of a prison pregnancy as "horrible".

With all her family in Port Elizabeth, Ditolo had a lonely pregnancy, without a single visitor.

Her son, Andile*, is now eight-months-old. When he turns two, he will go into the care of her family in Port Elizabeth, and she will be transferred to East London.

According to Phumzile Kotane, spokesperson for the correctional services department, most children are sent to live with family members when they turn two, even distant ones.

But those with no family, usually foreigners, end up in the child welfare system – in foster homes or at children's homes.

This is where another stage of the problem kicks in, says Lisa Vetten, senior researcher at Tshwaranang Legal Advocacy Centre.

Children of women in prison "fall between the cracks" once they leave the prison facilities. They are often unable to cope and adapt in the outside world and "they are neither the responsibility of the department of correctional services nor the department of social development".

Dawn Nagar, a researcher at the Centre for Conflict Resolution, has done extensive research on babies living in prison. She says that putting inmates' children into foster care when they turn two is problematic.

"During the time of my research in Pollsmoor Prison, there was one social worker to 400 or 500 inmates. This lends itself to one individual being often overworked, as it is impossible to cope with the high demands."

Nagar says this leads to foster care placement for the children of inmates usually being quite low on the agenda, and too often children are placed in foster care homes that have not been adequately vetted.

"The home environments are seldom not conducive to the child's wellbeing and the mothers in this instance are left feeling anxious," says Nagar.

Experts also say separation at age two is highly traumatic for children, who bond fiercely with their mothers during their time in prison, and that alternatives to imprisonment need to be looked at.

"We should look at alternative ways of sanctioning women," says Vetten.

"For example, there are forms of community supervision, such as house arrest. Or we could set up visiting rooms conducive to building and maintaining bonds between mothers and children."

For now, the women in Johannesburg Prison are making the most of their time there, and trying to see the positive side of life behind bars.

"I've learned love and respect in here," says Ditolo, her face silhouetted in front of the bright pink curtain that blocks the light from the single window in the cell.

"My child will remember what prison was like so he will never come back here."

Ncube, who keeps pointing out the picture of her first child back home in Zimbabwe, which is pasted on the wall, has just completed a course on caring for HIV-positive patients. She is struggling with the idea of meeting her son in the future, however.

"When my boy grows up and finds out his mother lived with him in prison, I don't know how he's going to take it," she says.

Mitchell is the most positive of all. She's chatty, and very honest.

"I turned to drugs, I even turned to rocks," she says, as we walk out through the cream barred gate.

"Do you know what's rocks? I even smoked rocks when I was pregnant. But thank God I came here. God opened my eyes when I came here. I would have been dead."