Filmed or Not, Rape is a Vicious Crime 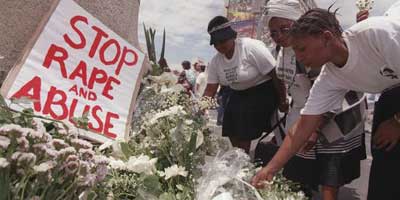 Women place white flowers outside parliament during a demonstration on the International Day for the Prevention of Violence Against Women in South Africa. (Photo: Getty Images.)

Uproar Focuses on Filming of Rape, Not Rape Itself

What is very disturbing, though, is that the focus of the uproar in the nation seemed to be more about the filming of the rape, rather than the rape itself.

Her comment suggests that the case is being prioritised, not because a teenage girl was raped, but because the rape was filmed.

Why Not Prioritise Unresolved Rape Cases?

If indeed the matter is being prioritised because a teenager had been sexually violated, and her Human and Constitutional Rights violated too, then why not prioritise the following cases that are still unresolved?

South Africa Fails in Its Duty to Protect Children

In South Africa, children are classified as vulnerable, as they are a special group in our society that not only experiences the worst of social ills, but also because they are often unable to fend for themselves.

Apart from the Constitution, children are also protected by the United Nations Convention on the Rights of the Child (CRC). South Africa ratified the Convention on 16th June 1995. It is clear that as a nation, South Africa is failing in its duty to protect its children.

And according to the Institute for Security Studies (ISS):

No Rape is 'Worse' or 'Better' Than Another

It is something horrific that no-one, especially a child - should have to experience.

No rape should ever be thought of as ‘worse’ than another, as doing so suggests that some forms of rape are more acceptable than others. It also suggests that a nation that accepts rape as a part of its existence is also a nation willing to compromise on a vicious crime, as long as it’s a ‘better’ form of rape.

As a nation, we need to prioritise every case of child rape, which is terrible blight on us all; we are failing those who most need our protection.