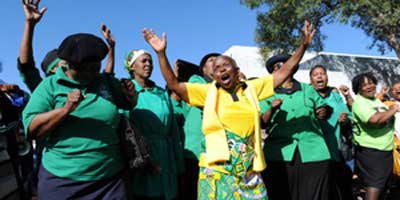 In the notorious cellphone video of a 17-year-old girl being gang-raped, the perpetrators are seen laughing and taking turns to rape her.

On Thursday, as the seven accused walked into the Roodepoort Magistrate’s Court, some hid their faces in shame.

Others turned away, no longer proud to appear before the cameras.

The five men and two boys were making their first court appearance.

Faith MazibukoGauteng MEC for Community Safety Faith Mazibuko, along with Men and Women against Child Abuse activists, and even some neighbours of the victim, had arrived to express their feelings.

“We need to fight this scourge in our community. If you are a man, you must use your brain to think, not your trousers,” Mazibuko said to a cheering crowd.

Some of the placards held by the protesters, who spent several hours chanting outside the court, read: “Cut their penises. No bail. Life sentence for rapists.”

National Prosecuting Authority spokesman Mthunzi Mhaga said that because two of the accused were under the age of 18, the case would not be held in an open court, and the public and media were barred from entering.

They will be joined at their next appearance by a 37-year-old suspect who was arrested on Wednesday while trying to flee his home with the rape victim in his custody.

The preliminary charge sheet lists numerous counts of rape, sexual assault, engaging the sexual services of a minor for a reward, using a minor to create pornography, and committing a sexual act in the presence of a minor.

They are also alleged to have breached the Film and Publications Act in that they possessed, created and distributed child pornography.

Mhaga said that while there had been speculation that the girl’s mother might be arrested, there were no plans to charge her with negligence or neglect because of her daughter’s kidnapping.

A neighbour of the victim, Florah Motlhake, said she understood the pain of the victim’s mother, as she too was raising a disabled child.

Motlhake said members of the Dobsonville community struggled to get financial support for their disabled children, and that it was common for these children to be sexually exploited.

“But they do not take us seriously when we report it (to the police),” she said.

Meanwhile, the siblings of the raped teenager have made a desperate plea for help for their mother, who, apparently, is prone to memory loss and forgetfulness.

The daughters said that if there was someone to be charged with negligence, it was the police.

“Police failed us after they didn’t open a case because our sister had a history of going missing and then turning up,” they said

They were referring to the fact that their mother had gone to the police for help.

The grainy recording of the rape has gone viral among pupils in Joburg’s townships and has been condemned around the world – but were it not for the footage, the case would never have been reported.

On March 31, the girl was attacked by men and boys who filmed the incident in a clip lasting 10 minutes and 33 seconds.

The footage shows the girl being raped in the veld, screaming and begging for the seven to stop as they take turns raping her.

They ignore her cries, joking and spurring each other on.

The video ends with one of the suspects offering the girl R2, and she is heard crying.

The video pictures led to the perpetrators’ arrests at their homes  after they’d been distributed in Bramfischerville and Dobsonville.