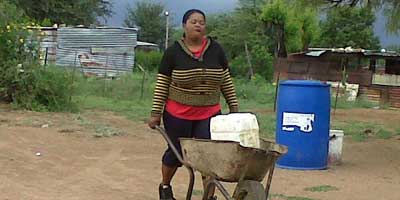 The Reality That is Lived Daily

Water, and the Right to Life

All living creatures need water for their survival.

It is essential for nutrition, for the production of food, and for hygiene.

It is clear that water is integral to ensuring the greatest human right: the right to life.

In most South African households, women are the primary caregivers and as such, they bear the worst of inadequate access to water.

As primary caregivers, women are the heaviest users of water. Needing it not only for household chores such as cooking, cleaning, and washing, but for those with children, it is also essential for childcare.

Under these circumstances, women are forced to ensure that their households have water, and in doing this, they often compromise their own safety by going long distances for water.

It also adds to their responsibilities, robbing them of time that could have been better used – whether to improve themselves or tend to their families. Women have specific sanitation needs, yet in many areas there are no adequate toilet facilities.

A lack of access to water, also leads to a lack of adequate sanitation. With women having their own specific sanitation needs, they are once more the worst-affected.

Being unable to urinate, defecate, or deal with menstrual hygiene in private is an affront to a woman’s right to dignity - quite apart from the possible safety risks involved, women often find it humiliating.

For most women in rural areas, this is a reality that is lived daily.

Statistics published in a government report in August 2011 appear to show that a vast majority of households in South Africa have access to water.

However, a closer analysis reveals that many have to walk long distances for water, and that water supplies are not necessarily clean and safe. Over half the population may be lacking an adequate water supply.

In failing to fulfil obligations in this respect, the state is not only denying a basic human right, but in so doing oppresses a group that it has classed as vulnerable - women and children.* Moreover, women are often primary caregivers of other groups who are considered to be vulnerable, such as older people and those with disabilities.

The consequences of the lack of adequate access to water for women remains an ignored topic, even on important days of observance.

To ignore this issue, is to condone the abuse of women, for this is what it amounts to:  a horrible form of abuse that keeps women in poverty, as time that could have been used for self-development and food production is lost in the pursuit of water.

It is also a form of physical abuse for those going long distances, with additional emotional abuse for those who - through lack of access to water - are forced to watch their children go without meals and go thirsty.

The South African media’s failure to raise access to water as a matter of public concern –  and civil society’s silence on the matter, is a serious form of abuse against South African women.

Until this matter is addressed, abuse against women will be a never-ending phenomenon.

“The prescribed minimum standard of water supply services necessary for the reliable supply of a sufficient quantity and quality of water to households, including informal households to support life and personal hygiene.”

Regulation 3 of this Act states that the minimum standard of basic supply is:

“The minimum of potable water of 25l per person per day or six kilolitres per household per month at a minimum flow rate of not less than 10l per minute; within 200m of a household and with an effectiveness such that no consumer is without a supply for more than 7 full days in any year.”

We also have the National Water Act which aims to:

The Constitution even goes as far as setting out the specific duties of the state to “respect, protect, promote and fulfil” the right to access of water as seen in Section 7(2).

Apart from its own laws, South Africa is also bound by international law to ensure the adequate provision of water.

* Ministry for Women, Chidren and People with Disabilities - Republic of South Africa - South Africa's report to the AU Secretariat on the progress made on implementation of the AU Heads of States' Solemn Declaration on Gender Equality in Africa. July 2010