Corrective Rape: the Horror in Our Townships 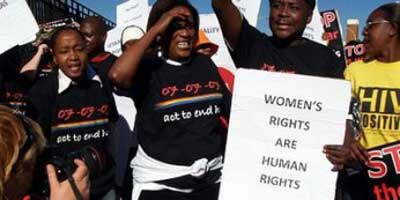 Koketso Moeti is a project Coordinator at Operation: ROOIGRONDSouth Africa was the first country in the world to outlaw discrimination based on sexual orientation in its constitution, and the first African country to legalize same-sex marriage –  but in the inner townships horrific violence against lesbian women continues unabated.

The main aim of the Promotion of Equality and Prevention of Unfair Discrimination Act of 2000, was to promote real and meaningful equality in South Africa.

Because of our history, which has provided evidence of the tragedies and sheer horrors of inequality, equality is for us a fundamental value, upon which the South African constitution is based.

Our constitution is very clear that no one can face discrimination based on race, religion, gender, socio-economic status, and sexual orientation.

To further enhance the right to equality, the Equality Act establishes any Magistrates Court and High Court as Equality Courts –  where individuals can bring cases of unfair discrimination not only against private bodies and government, but also against individuals.

This says a lot about how seriously South Africa as a state takes equality.

Apart from its high regard to the right to equality, it is also notable that South Africa was the first country in the world to outlaw discrimination based on sexual orientation in its constitution, and the first African country to legalize same-sex marriage –  making it an extremely progressive state to many all over the world.

In spite of this, in our townships, an evil lurks –  an evil that has come to be known as "Corrective Rape".

A “Cure” for Lesbians

"Corrective rape" –  a phenomena taking place in South Africa's townships,  is an act of violence against lesbian women committed by men to "cure" or "correct" lesbians of their sexual orientation.

This violent crime not only violates homosexual women's right to equality, but also their bodies, minds, and very beings, as well as their rights to human dignity, expression (by virtue of the danger of publicly expressing their homosexuality), freedom and security of their person, and in many cases, even their right to life, just to name a few injustices.

As such, "corrective rape" can be said to violate a number of fundamental rights under South Africa's 1996 laws, and denies women from enjoying a South Africa free from fear, hatred, and bigotry.

The mere definition of "Corrective Rape", no matter how detailed, cannot completely describe the full horror of this phenomenon.

Eudy Simelane, a thirty-one-year-old lesbian from Kwa-Thema township outside Johannesburg, was attacked by a group of men who dragged her on the ground, gang raped her, and stabbed her twenty five times in the face, chest, and legs- dumping her body in a ditch where they left her to die.

Nokuthula Radebe, was a 20 year old lesbian who was raped and murdered, with her corpse discovered a mere four weeks after the murder of Noxolo Nogwaza.

Millicent Gaika was brutally beaten and raped for five hours by a man who continually told her he was "showing her how to be a woman".

And not just women, but girls, too,  are subject to this violence. A  13-year-old lesbian girl, open about her sexuality, was raped in Atteridgeville, Pretoria.

These few examples are not even a tip of the iceberg, but  provide a sense of the brutality in these homophobic attacks-which plague South Africa at alarming levels, and are still on the rise.

Without a doubt the rape and murder of any and all women is a tragedy; however, "corrective rape" is singled out in this article to illustrate that it is not only a criminal act, but also an affront to the constitutional values of freedom and equality by virtue of it being clear that the perpetrators fail to recognise that gay and lesbian rights are human and constitutional rights,  and as well, to illustrate how our justice system is failing these victims.

It is believed that "at least 500 lesbian women are victims of 'corrective rape' each year"  (Human Rights Watch, Country Summary: South Africa 3 [2010]), and yet, out of the thirty-one lesbian women who were reported murdered in homophobic attacks in a decade, there has been just one conviction.

It is clear that the South African Constitution –  which was formed to protect ALL South Africans, is badly failing young black lesbians.

NB: Despite the horrific nature of the crime, Millicent Gaika’s attacker was reportedly let out on R60 bail (R60 is less than 1USD).