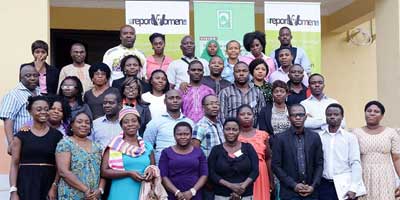 Journalists selected by the WSCIJ for training.

The Wole Soyinka Center for investigative Journalism (WSCIJ) has begun its Report Women! Project in Nigeria.

The Report Women! Project started in May 2014, with a one-month media monitoring of the reportage of girls and women in seven Nigerian newspapers.

The media monitoring was followed by a stakeholders' meeting on Thursday, 7 August, 2014, where civil society organizations and media editors met because

“The Centre thought it necessary to seek the input of non-governmental and media organisations who have been working on girls and women issues at the inception of the project in a bid to bring all on board as partners. According to her [project coordinator], the meeting is an acknowledgement of past contributions to the promotion of girls and women’s issues as well as the Centre’s strategy to avoid repeating unnecessary mistakes on the project by learning from forerunners”. www.wscj.orgj.org

At the stakeholders’ meeting, WSCIJ said that it will continue with the training of selected journalists since the project seeks to use the tool of investigative reporting to highlight these issues, even as it examines the role of religion in the girl child and woman’s rights trajectory.

It was a two-day training where journalists from the electronic, print, photojournalists, citizen journalists, and freelance writers were in attendance. The call for applications by journalists ended on the August 14th 2014.

Qualified candidates were selected from every part of Nigeria and three training centers were identified as Ekiti, Abuja and Cross River. These qualified candidates also have the opportunity to pitch for small grants to carry out investigations and report on girls' and women's issues based on lessons garnered from the training experience.

The first investigative reporting training has come and gone. It was held at the Ikogosi warm spring, Ikogosi Ekiti, Western Nigeria.

This two-day training on investigative reporting for girls and women will also take place in Abuja and Cross Rivers State respectively.

Qualified journalists have also been selected in the Eastern and Northern Parts of Nigeria to undertake these trainings in these locations. According to the coordinator, more than 30 participants were selected from the southern part while less than 20 were selected for the Northern part of Nigeria.

Some of the topics covered during the Day 1 at Ikogosi Warm Spring, Ekiti are;

Justice was done to some equally pertinent topics on Day 2; the topics were:

There were seasoned professionals and women rights activists’ facilitators at the two–day training, amongst whom are: Mr Dapo Olorunyomi, Mrs. Abiola Akiyode-Afolabi, and Mr Musikilu Mojeed, etc.

Facilitators and participants shared relevant experiences, which made the training and experience perfect space for growing, soul lifting a fulfilling time with fellow journalists.

According to her, the Wole Soyinka Center for Investigative Journalism wanted to include more women for the training, because it is a women-focused project, therefore women are affected and they equally understand their issues – which makes it more of a woman/girl project.

Male Journalists Are Ready to be Allies

Meanwhile, she was encouraged by the fact that more men are ready to report on women's issues. This also shows that Nigerian men journalists are allies for gender equality and women empowerment. It is an indication for a better acceleration in the achievement of the MDG goals.

This is one of the major goals of the project.

Although, it is advised that more women and more journalists in Nigeria and Northern Nigeria should always apply for opportunities for training and re-training for better empowerment and increased professionalism.

Getting Ready to Investigate & Report

The pitch will be screened by some selected professionals, after which participants will be supported with a small grant to investigate and report.

The Wole Soyinka Centre for Investigative Journalism (WSCIJ) is a not-for-profit, non-governmental organization with social justice programmes aimed at exposing corruption, regulatory failures and human rights abuses with the tool of investigative journalism. It was founded by Mr. Dapo Olorunyomi, a seasoned journalist and founder of the Premium Times.