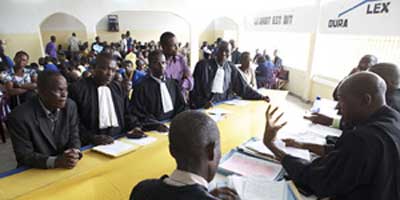 Five years after the Democratic Republic of Congo (DRC) revised its laws against sexual and gender-based violence (SGBV), these crimes continue to go unpunished because of judicial inaction and a legal culture at odds with the changes.

The laws, ignored and misinterpreted, have left escalating numbers of sexual violence survivors unprotected, and perpetrators free to violate again.

When the penal code was amended in 2006, it was intended to “prevent and severely reprimand infractions relating to sexual violence and to ensure systematic support for the victims of these crimes”, according to the text. To this end, it included previously ignored sexual violations addressed in international humanitarian law, and toughened up sentencing for those who violated the vulnerable, including children, the disabled and subordinates.

These new laws should have protected a 13-year-old girl in Kinshasa from being sexually assaulted by two of her teachers. Indeed, they are both standing trial for the crime. But efforts to bring them to justice were initiated by the girl’s family, not the state that promised to support survivors. Her father had to pay a “fee” of US$60 - his entire monthly salary - to submit a complaint to the judicial police officer.

“The measures taken by the family are already a great exception, and proof of great courage,” lawyer Claude Kaniekete Boba told IRIN during the first hearing. Most survivors never see their lawsuits progress to actual trials. This girl’s family had to seek legal aid from an NGO with access to a UN-supported clinic. “Without the legal clinic we would never have had access to a lawyer,” her father said.

Most magistrates show little regard for the revisions to the law and prefer to highlight their perceived failings, such as the requirement for police to open a case within a month of receiving the complaint, according to Josiane Mutombo, a lawyer at the UN Joint Human Rights Office (UNJHRO).

“People think that we are doing too much to address sexual and gender-based violence and that giving so much importance and energy to this problem is absurd,” said Mutombo.

Such attitudes sit uneasily with the data.

Extrapolating from a survey of 3,436 women in 2006 and 2007, a study published in May by the American Journal of Public Health found that 1.8 million women in DRC had been raped during their lifetime. For the survey period, the rate was 48 rapes every hour, with most attacks committed by husbands or partners.

“Not only is sexual violence more generalized than previously thought, but our findings suggest that future policies and programmes should focus on abuse within families and eliminate the acceptance of and impunity surrounding sexual violence nationwide while also maintaining and enhancing efforts to stop militias from perpetrating rape,” the authors concluded.

Even if there is no consensus on the quantitative extent of SGBV in DRC – where just one in 20 cases is thought to be reported to the authorities - any numerical debate is meaningless to Denis Mukwege, a doctor who heads Panzi Hospital in the South Kivu capital Bukavu, which specializes in treating rape survivors.

“This question of statistics is not relevant,” he told IRIN. “We know that the plague continues in a massive, violent and dramatic way. We shouldn’t talk about figures, we should act.”

But while the 2006 revisions were designed to beef up options for legal action, they clash with other laws and certain cultural norms. Sexual contact with someone under 18 is now automatically defined as rape, but the Family Code permits women to marry at 15, for example.

“The law is really not recognized among the population and even among magistrates,” explained Marie Josée Mijinga, president of the Association of Women Magistrates. “It is not adapted to the realities of Congolese life.

"A woman who has been raped is dirty"

“In Bantu culture, a woman who has been raped is dirty, and she is excluded from the community,” Mijinga told IRIN. Thus, a woman who has been raped must weigh her desire for justice against the social consequences. Incest survivors are sometimes silenced by other female relatives, afraid of losing the income that the male offender brings the family.

The mother silences the whole thing because she thinks, ‘It’s he who ensures that I eat’,” explained Mijinga. “Between sacrificing a little girl or the whole family, her choice is quickly made.”

She added that the law was also open to abuse by families of girls younger than 18 who used accusations of statutory rape against older boyfriends to extract dowries and pledges of marriage.

This financial desperation works the opposite way as well, when women being sexually harassed at work refuse to report it lest they lose their jobs.

Cases that are brought to the police are not guaranteed to be pursued. Less than one in three SGBV cases presented to law-enforcement agents in North Kivu was investigated in 2010 for example, according to the UN Development Programme’s access to justice and legal protection project.

Police do not even have a pen

Mijinga blamed some of this unresponsiveness on financial problems. The police had neither vehicles, nor even an office to receive complaints. “The police, who don’t even have a pen, do not have the means to lead an investigation or to go on the ground and gather proof,” said Mijinga.

The 2006 laws set a requirement for police to open cases within 30 days of receiving the complaint. “Without this strict timeframe… it would be worse,” said Yvette Kabuo, assistant lawyer at the legal clinic of the Panzi Hospital. “Judicial staff wouldn’t do anything for years.”

The burden of proving allegations that do go forward usually falls on the survivor alone. Magistrates often wrongly demand a medical certificate as proof before they will register a complaint, according to Epiphane Zoro, a magistrate working with UNJHRO. Even though it is illegal, magistrates also demand fees to prepare cases, and to ensure that they progress. Claims of indigence require a certificate, which must be paid for.

Magistrates and security forces are also hesitant to investigate perpetrators in influential positions. When cases do go to court, judicial decisions are sometimes twisted by corruption so that the guilty may buy their freedom. The ease with which suspects bribe or escape their way out of custody leaves survivors even more afraid to testify for fear of reprisal.

Kabuo, the Panzi hospital lawyer, said the problems lay more with the judicial system than the law. “Our programme here had to be put on hold for months because there was no magistrate in the jurisdiction. In 2008, only 10 perpetrators were arrested out of the 49 cases presented.”

The Minister of Justice has said he would recruit 2,000 additional magistrates, but has yet to do so.

Given the lack of confidence in the judicial system, many survivors choose to handle sexual assault allegations at the family level. This allows them to avoid the shame and stigma of publicity.

But it also means some survivors must marry their rapists.

“The traditional chief of the village or family sees the marriage of a young girl to her aggressor as a kind of reparation,” explained Zoro. “Even the victim sometimes shares the same wish. She prefers this solution to dishonour, and the impossibility of marrying afterward since she is no longer a virgin.”

A round-table discussion was held in Goma in early May to evaluate the implementation of the 2006 laws and to advocate to the government on how to better enforce them.

The international community, keenly aware of the problems of SGBV in the DRC, is committed to seeing an end to impunity through increased judicial strength and awareness.

“The professionalization of the national security services and strengthening of the judiciary are essential for human rights, humanitarian access and the protection of civilians,” said UN Secretary-General Ban Ki-moon in an 18 May address to the Security Council. “The cycle of impunity must end.”