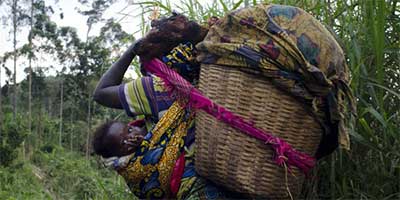 For the women forced to flee their homes by the fighting in eastern Democratic Republic of Congo, the simple chores of getting food or fetching firewood are fraught with danger.

If they venture outside the camps set up for the displaced, they risk being raped by members of the many armed groups active in the region, or even by soldiers in the regular Congolese army.

Rape has become a weapon of war in eastern DR Congo, a defining feature of the conflicts rending the mineral-rich region since the 1994 genocide in neighbouring Rwanda, whose aftermath deeply destabilised the area over the border.

At the Mugunga III camp, as at the dozen or so others scattered around Goma -- the flashpoint city around which most of the recent fighting has revolved -- women are often the ones who risk going outside, anxious to protect their husbands and sons from being forcibly recruited into a rebel group or worse.

The World Food Programme brings meals to the camp once a month, but the rest of the time the women have little choice but to venture outside to farm the surrounding fields and gather firewood to cook.

Aid staff and the displaced have tried to find a compromise to keep women safe at the camp, which houses 14,000 people in dirt-floor shacks about 10 kilometres (six miles) west of Goma, the capital of North Kivu province.

"But it's hard to reason with someone who needs wood, who's hungry.... We try to show that there's no need to go too far, even if it's just to bring back a small amount," said Evariste Kabunga, who represents the refugees at Mugunga III.

Providing alternative cooking fuel -- mainly in the form of briquettes made of compressed sawdust -- could go a long way to curbing the scourge, say the United Nations and humanitarian groups.

Several projects are now aiming to do just that.

A Dutch-backed World Food Programme project has begun distributing briquettes made by local women to displaced people, according to Fabienne Pompey, a WFP spokeswoman.

Rick Slettenhaar, in charge of humanitarian affairs for the Dutch embassy, said the Netherlands was also working with the Women's Refugee Commission to provide better stoves that use less wood and can also burn briquettes.

In 2011, the UN refugee agency, UNHCR, set up a small factory at the Mugunga III camp that makes briquettes from water, sawdust and paper.

The project "is both a way to prevent sexual assaults and a way of generating revenue," said Celine Schmitt, UNHCR spokeswoman in DR Congo.

The displaced people keep part of their output to cook and sell the rest -- mainly to the camp's bakery, which is funded by UNHCR and pays $5 for a bag of 300 briquettes.

'I am so afraid after what I've been through'

Sexual violence against women in eastern DR Congo increased sharply last year as a new rebellion by a group of army mutineers called the M23 engulfed the region in fresh unrest.

More than 5,000 women were raped in North Kivu province in 2012, according to a local hospital.

At Mugunga III alone, health clinics recorded 664 cases of sexual violence from January to July 2013, according to Schmitt.

Late last year UNHCR announced it had delineated "safe" areas for collecting firewood, but the project never took off.

The women opposed it, fearing their husbands would be abducted if they came with them, or that they could be caught up in the fighting if police accompanied them and they came across rebels.

"The only solution is to be escorted by MONUSCO," the UN's peacekeeping mission in DR Congo, said Sabine Mubi of the humanitarian group Hope in Action, which offers counselling for rape victims.

But so far the idea of MONUSCO escorts is just a proposal.

ONLY A PARTIAL SOLUTION

And a 32-year-old rape victim said she had reservations: "This is not possible because the escort will stop on the main road, but it's (away from there) that we are attacked. Also, you cannot all collect (wood) in the same place. You have to spread out to find enough wood to return to the camp."

She works at the UNHCR briquette factory at the Mugunga III camp.

"If I make briquettes, I have no reason to go out and fetch firewood.... I am so afraid to go there after what I've been through," she said.

Another camp resident, 62-year-old Jeanne, says funds are needed to expand the briquette factory and a nearby soap factory, another UNHCR project that provides work for women inside the camp.

"These activities are the way they pay to school our children," she said.

Unfortunately, providing an alternative to firewood is only a partial solution.

"Women have to go out in search of food. They can't stay there, crying and waiting" for food aid, Mubi said.