Change & Hope: A Trip to the DR Congo and Rwanda 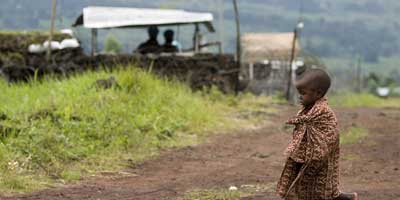 By Nicole Weaver. Chief Information Officer at Women for Women International in Washington

SOURCE - NOTES FROM THE FIELD: Change and Hope: Nicole Weaver's Trip to DR Congo and Rwanda 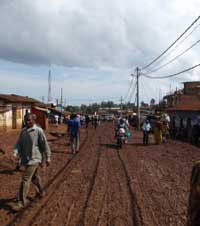 I was nervous crossing the border from Rwanda to the Democratic Republic of Congo (DRC).

I know many of my colleagues at Women for Women International travel there, but I’ve heard reports of sporadic and random violence in the DRC.

As our 4×4 wound its way through the mountainous border region with its tea plantations and volcanoes, I felt a sense of foreboding.

The border itself is a scruffy-looking parking lot with a few immigration buildings and a lot of people standing around waiting to be processed. There are two gates—the first lets you out of Rwanda and the second lets you into the DRC. The site is a no man’s land, and you could wait 30 seconds or 30 minutes to get through.

I climbed down from the first car in a torrential downpour and completed departure formalities and walked to DRC immigration, where I was examined, stamped and waved through.

Our destination, Goma, is a town close to the border and one of four sites operated by Women for Women in the DRC.

Within a few minutes I was in town, bouncing along a poorly paved road in a traffic pattern that seemed to have few rules except “every man for himself.”

The contrast with Rwanda is marked: Where Rwanda is clean and organized, Congo is chaotic and dirty.

Compared to the last few miles of sparsely populated rural countryside in Rwanda, Goma struck me as noisy, crowded and stressed.

Roads in Rwanda had occasional potholes; roads in Goma are mostly potholes punctuated by a few stretches where the pavement has not yet given up.

The roads in the DRC are full of potholes, uneven and often difficult to pass.

My hotel was on the shores of the serene Lake Kivu. Grace Fisiy, our agribusiness specialist, and I decided to take a walk—I still had my lingering concern about security, but Grace assured me it was safe (she is from Cameroon and has traveled all over Africa, so I trust her instinct).

The dirt in this area is black.

Mt. Nyiragongo erupted in 2002, destroying 15% of the buildings and leaving 120,000 people homeless. It also left behind black fertile soil and dust everywhere.

The volcanic rock is so plentiful, it is a favored building material, meaning the buildings are also black. As we walked, chatting about Cameroon and family, I gradually realized I had completely relaxed.

I did learn a new word on that walk — mzungu, Swahili for white man, which was muttered occasionally as we passed groups of bored security guards!

MAY GOD TAKE CARE OF YOU

The next day, Women for Women’s driver arrived and took us to the office.After some meetings at the office we headed to the vocational skills center, where participants learn soap-making, knitting, cookery and bread-making.

There were no classes that day, but about 150 newly enrolled women listened to an orientation, learning what to expect from the program and what Women for Women expects from them.

As I stood in the doorway, listening and snapping a couple of pictures, the trainer asked the women if they had any questions.

One woman at the far side of the room stood and said, “We want to know who the visitor is,” looking at me. I introduced myself and explained that I was visiting from headquarters and that my job was to find them sponsors (applause) and make sure their letters get to their sponsors (cheers).

They said they wished God would take care of me for many years. 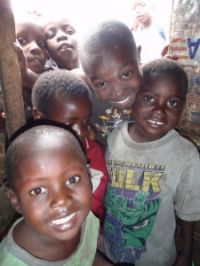 Next, we went to the last remaining internally displaced person camp in the Goma area at Mugungu to meet an amazing woman named Judith.

The camp was established to provide the most basic needs of shelter, water and safety for people fleeing violence within their country, and it is certainly basic.

Children, some naked, played in black puddles of water next to the central water faucets.

The camp had an air of suspended despair, as if everyone in it were waiting for the nightmare to end and for a better life to begin.

I asked how long people usually stay in these camps and the answer was depressing: 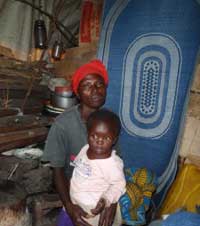 We reached Judith’s hut and ducked inside the door flap.

She began to tell us her story.

Judith was just 14 when she lost her parents.

She married and had three children but at age 24, war broke out in her home of Masisi and violence hit Judith’s family.

“They took us all to the bush and killed my husband,” she said. “I managed to escape and reached Mugungu camp.”

Judith then told us how difficult life in the camp had been, how there was little economic support and how, one day, while she was collecting firewood in the bush in order to cook for her children, she was raped and became pregnant.

As she spoke, the sorrow and shame clouded her face and she avoided my eyes, head hanging low, voice soft and tremulous.

Meanwhile, the beautiful little girl in her arms, the product of that terrible act, slept peacefully.

Judith was taken care of by UNHCR (the UN Refugee Agency) during her pregnancy and then heard about Women for Women.

“I heard there was a group of women that defended the rights of other women,” she recounts.

“When I first went to the class I felt I was not like other women, first I am an orphan, then a widow, then a rape victim.

I was so depressed I could not speak.

Women for Women taught me how to manage the stress in my life and taught me bread-making.

Now I am in a cooperative with 20 women and I am the vice president. We make bread and sell it for profit.

Women for Women provided me with the training and the tools to earn money so I can survive. The group helped me to understand I am a woman just like other women.”

Leaving the hut after hearing Judith’s story, I was once again amazed and inspired by the courage of the women we are privileged to serve.

Rape is a shameful act wherever it occurs.

Sadly, in the DRC that shame is conferred upon the blameless woman, who is shunned by her husband, family and society. To speak publicly of such a terrible trauma is hard enough in the U.S.—to do so in Congo, you are likely to be judged and rejected. 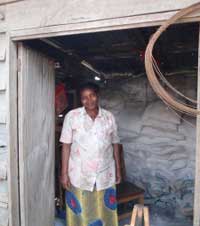 Our next stop was visiting Valentine. Her circumstances are similar to Judith’s in many respects.

She was brutally raped in her own home while nine months pregnant.

Valentine was in so much pain she passed out and has no recollection of how many times she was raped. Her husband started abusing her, accusing her of enjoying it, and eventually left her with four children and no resources.

Valentine joined Women for Women and learned business skills she applied to her previous business: trading cement and hardware.

She invested her sponsorship funds and built up her business until she was able to buy a small shop and a house.

Now she puts all her spare money into her business and shows a fierce determination to building her assets.

When I asked her what she would say to her sponsor she said, “I would thank her so much, and I would be proud to show her how I am going up.” Valentine’s spirit and strength shine her story.

The next morning, I made my way down to the harbor to get the boat to South Kivu province, where our main country office is located in the town of Bukavu.

On arrival in Bukavu, I cleared immigration and was collected by the Women for Women driver.

We bounced up a steep and muddy road to reach the main road and in a few minutes reached the main Women for Women offices. 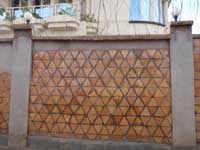 As in Goma, the office is behind an eight-foot-tall wall topped with nasty-looking razor wire.

The outside of this wall, however, is decorated with tiles hand-made by some of or women at the ceramic studio in Panzi, an attractive showcase for their capabilities.

The next day (after an interesting start—the bathroom had no water) was filled with site visits, starting with the vocational training center at Panzi.

Although this is just a few miles from Bukavu, the journey takes almost an hour due to the appalling state of the roads.

When we reached the center, it was a hive of activity—there were two training sessions in progress, teaching the importance of groups (you must support each other; two people are stronger than one). In addition, the sponsorship team was busy enrolling women while nearly 150 women attended an agricultural vocational training orientation. 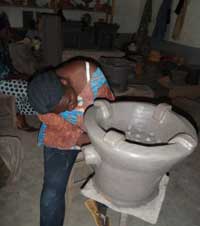 Behind this bustling open-air area we spied a large building housing the ceramic studio.

By contrast, the air inside the studio was calm and peaceful, with a few women diligently working the dark gray clay to form vases, cooking braziers or flower pots.

The women are taught the basic design of a cooking brazier, but we saw several examples of new designs students come up with on their own...

..once their creativity is unlocked, there are many good ideas.

Another very successful product is the clay tiles I had earlier seen adorning the wall surrounding the main office.

The trainer explained that demand for these tiles outstripped their ability to make them, and that he was looking into ways that the production could be increased.

As we strolled back through the compound, I was asked me if I would like to see the famous Panzi Hospital, and institution that has helped rape victims for years.

I said I would love to, and a short drive later we arrived at the gates. As soon as we entered the hospital grounds, the tranquility was overwhelming. Gardens overflowing with flowers were surrounded by low buildings and a cool, shaded walkway. Patients waited to be seen, and white-coated staff members busied themselves with the care of their charges.

We were fortunate that Wednesday is when Dr. Denis Mukwege does not see patients, but receives visitors. After waiting a short time I had the opportunity to greet Dr. Mukwege and shake his hand—a great honor for me!

The last stop of the day was the vocational training center at Bukavu, where we were able to see women in the process of making the bright tie-dye fabrics I had seen brought back to the states by my colleagues, and all kinds of soap for both bathing and washing clothes. Julienne, a former participant and now a trainer, walked me through the fascinating process of the soap-making and proudly displayed the finished product.

Of course I had to buy some.

A Day in the Life of Karak Mayik

WOMEN FOR WOMEN INTERNATIONAL - From Victim to Survivor... to Active Citizen

"Women for Women International believes that when women are well, sustain an income, are decision-makers, and have strong social networks and safety-nets, they are in a much stronger position to advocate for their rights."