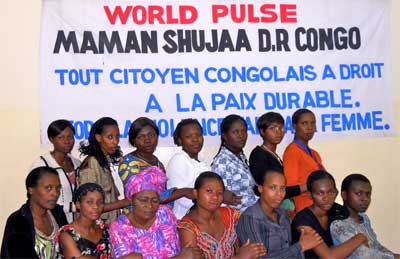 Neema and her group of grassroots women leaders, the Maman Shujaa (Swahili for Hero Women), after filming a message of solidarity to the "comfort women" of S. Korea. Photo: Carmen Stone

“Umoja ni nguvu,” (Together, we are strong!) –The Maman Shujaa

Various success stories have recently emerged from across the globe, in which technology and digital media have acted as driving forces for social change and transnational activism and key tools to solidify campaigns and political movements.

With a steady global increase in internet access and ease of connectivity facilitated by social media, opportunities have increased for people to have a collective voice and act in solidarity about issues that matter to them.

For the women’s movement specifically, great opportunities have arisen to converse and address on a global platform key gender concerns such as trafficking, FGM, violence against women, access to education, political participation, peace and security issues, and reproductive concerns and rights.

Resources driven by creative technology, which promote solidarity across borders, have been garnering significant potential to impact local, national, and international audiences.

A Global Sisterhood on the Worldwide Web 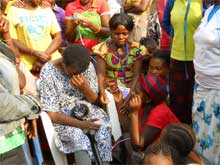 Neema hears a young woman's heartbreaking story. Photo: Carmen StoneNeema Namadamu and the Women Heroes of the Democratic Republic of Congo (DRC), locally known as the Maman Shujaa, offer one such story — that of hope for a better world through, what they call, “a global sisterhood on the worldwide web.”

In July 2012, Neema Namadamu started a media training centre for women. Within months, the centre turned into an internationally recognized movement for peace in the DRC. The idea began modestly, with just 10 women and a small rented space in a cyber café. Out of this nook, an inventive, technology-driven empowerment movement was born, creating an opportunity for women from across the globe to connect with Congolese women on the ground.

Women who came to the centre were taught basic computer and internet skills and a writing curriculum. They were then shown how to register for the World Pulse’s online forum. World Pulse is an action media network, which unites voices of women from across the world. It is founded on the belief that when women are heard, they will change the world.

These women’s involvement with World Pulse allowed them to post hundreds of stories online, creating the greatest volume of grassroots journalism in the DRC. These were stories, ideas, and solutions to DRC’s insecurity being shared not by journalists or researchers but by brave local women—the Maman Shujaa. Their voices were then amplified by World Pulse and shared with the African Union (AU) Summit in Ethiopia in January 2013.

Petition - A Plea From Grassroots Women

The Women Heroes of the DRC also created an online petition on change.org, calling women heroes on the other side of the world to appoint a special envoy to the Great Lakes region. The Maman Shujaa addressed the women at the White House — Michelle Obama, Hillary Clinton, Valerie Jarrett, and Susan Rice. They urged these powerful women for the appointment of an envoy who would work with the UN and AU representatives in establishing a process to find a lasting solution for peace in the DRC and ensure that women’s voices are heard during the peace process. To read and sign the full petition click here.

Within weeks, the petition had gained great momentum, and it soon received over 100,000 signatures from around the world. On January 28, the Maman Shujaa were given an appointment with the White House, where their representatives presented the petition and a plea for peace in the DRC. On June 18, Secretary of State John Kerry announced the appointment of former Senator Russ Feingold as Special Envoy to the DRC and Great Lakes Region.

The success of the Maman Shujaa thus far is only the beginning of what they have envisioned.

The energy that they have exemplified stems from just one media centre located in Bukavu, which currently supports over 250 women per week and shares their voices with the world.

Towards a Larger Dream

The dream does not end here. The Maman Shujaa aim to create thirty centers, one in each of the DRC’s largest cities spread across the nation’s eleven provinces. They envision these centers as hubs for women to come together and share their voices through technology. The potential of this project is truly boundless, and it offers a creative, grassroots alternative for improving the lives of women and citizens of the DRC.

More About Women Heroes of Congo