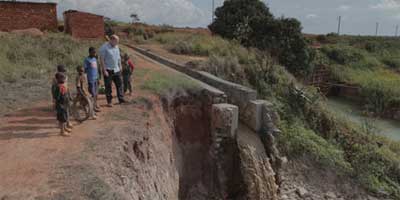 Glencore, the commodity and mining firm worth £27bn, stands accused in the Democratic Republic of Congo of dumping raw acid and profiting from children working 150ft underground.

The revelations come as the notoriously secretive Swiss-based company, which floated on the London Stock Exchange last year, seeks to merge with mining firm Xstrata in a £50bn-plus deal.

When Glencore floated in London, five of its partners became billionaires, but the biggest winner was Glencore's chief executive, Ivan Glasenberg, whose stake is worth £4bn. The company was founded in 1974 by Marc Rich, once one of the FBI's 10 most wanted fugitives, but now pardoned and outside Glencore.

But an investigation by the BBC's Panorama has found Glencore dumping acid into a river and it discovered children as young as 10 working in the Tilwezembe mine, which was officially closed by Glencore in 2008. International law prohibits anyone under 18 working in a mine. Undercover researchers at Tilwezembe found under-18s who climbed down hand-dug mineshafts 150ft deep without safety or breathing equipment to dig copper and cobalt.

Glencore's flotation prospectus says it stopped operating at the mine in 2008 because of a fall in the price of copper. The metal has since bounced back to record highs. In the meantime, the mine has been taken over by a local firm that pays artisanal or freelance miners, including under-18s, fixed prices for copper-ore nuggets. Glencore still owns the concession and plans to restart mining.

The number of accidents at Tilwezembe is extraordinarily high: Panorama was told that 60 miners died there last year, making the mine one of the most dangerous in the world.

"We definitely do not profit from child labour in any part of the world. This is adhered to strictly."

The child miners were part of a group of artisanal miners whom Glasenberg said "raided our land in 2010 against all of our authorisation. We are pleading with the government to remove the artisanal miners from our concession".

But there is strong evidence that Glencore receives copper indirectly from the child labour mine. Panorama tracked a lorry laden with copper from Tilwezembe for 27 hours to a plant run by a major Glencore partner in Congo, Groupe Bazano. Copper from the Bazano plant has then been sent to Glencore's smelter in Zambia, according to documents obtained by the programme.

Asked if Glencore had taken copper in the past from Groupe Bazano, Glasenberg replied: "No, we don't buy copper from Groupe Bazano." Told by Panorama there was documentary evidence to the contrary, he said: "It cannot be." Glasenberg said the company operated a strict policy whereby all copper was mined correctly, placed in bags with numbered seals and then sent to the smelter.

For its part, Groupe Bazano said it did not profit from child labour and had not taken copper ore from Tilwezembe since the mine was closed by Glencore.

Glencore is also facing criticism for damaging the environment in Congo. For three years it has run a large copper refinery at Luilu in Katanga province. Ore containing minerals is burnt with acid to free up the copper but the heavily polluted waste has been pumped straight into the Luilu river.

Glencore's acid waterfall stank of toxic fumes when I visited it a few weeks ago. Upstream, the river used by local people to wash and fish was clear; downstream of the Glencore pipe, there was brown sludge. One local complained: "Fish can't survive the acid. Glencore lacks any respect for people. No one would do that to another human being. It's shocking."

A Swiss NGO tested the acidity of the wastewater and found a pH value of 1.9, where 1 is pure acid and 7 neutral.

Ivan GlasenbergWhen I met Glasenberg, I presented him with a bottle of Glencore water from the Luilu river and invited him to wash his hands in it.

Expressing no enthusiasm to do so, he said: "Not really. I can see what it is. I have been to that river. That is what people have dumped into the river for 50 years. Not correct. Terrible. That's why Glencore has spent vast amounts of money to get rid of this problem, to ensure clean water … will be discharged into that river."

Glasenberg admitted that Glencore would have been in trouble if it had dumped acid in the river in Switzerland or the UK. So why has Glencore been polluting a river in Congo for the past three years? "It was impossible to remedy faster," he said. "What else could we do? We have 6,500 employees, the government insists we keep them employed."

Glencore now says the pollution causing the acid waterfall has ended but has made no commitment to compensate the villagers.

This however is not the first time that Glencore has been investigated by the world's media. In 2011 ABC1 in Australia made a film for the documentary series HungryBeast

Marc Rich is an international commodities trader and entrepreneur. He was indicted in the United States on federal charges of illegally making oil deals with Iran during the late 1970s-early 1980s Iran hostage crisis and tax evasion. He was in Switzerland at the time of the indictment and has never returned to the U.S.

On January 20, 2001, hours before leaving office, Clinton granted Rich a presidential pardon. Because Rich's former wife had made large donations to the U.S. Democratic Party and the Clinton Library during Clinton's time in office, Clinton's critics alleged that Rich's pardon had been bought. Marc Rich had made substantial donations to Israeli charitable foundations. Clinton explained his decision by noting that similar situations were settled in civil, not criminal court, and cited clemency pleas from Israeli government officials, including then-Prime Minister Ehud Barak. Federal Prosecutor Mary Jo White was appointed to investigate. She stepped down before the investigation was finished and was replaced by James Comey. Comey was critical of Clinton's pardons and Eric Holder's pardon recommendation.