DR CONGO: An Army of Protectors or Sexual Predators 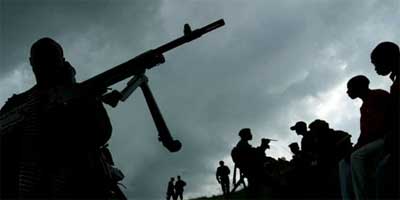 The FARDC is unable to resupply its troops, leaving them to fend for themselves | Photo:Reuters

DR CONGO: An army of Protectors or Sexual Predators?

"A dead rat is worth more than the body of a woman."

Those were the words of one distraught young woman whom I met in Walikale in the Democratic Republic of the Congo (DRC) in 2010.

As the world was once again outraged at the reports of mass rapes in early June 2011 in the DRC's South Kivu, her words came back to me. Those attacks marked the fourth incident in a series of mass rapes which took place in the previous 18 months in the country. Hundreds of children, women and men have been left to recover with little or no assistance.

If mass rape was not a part of life before the conflict in the Congo, why is it endemic now? And more importantly, how can it be rooted out?

A close examination of the DRC's national army appears to hold the key.

The Forces armées de la République démocratique du Congo (FARDC) is made up of roughly 50 different armed factions, stitched together from various peace deals during the country's long history of war.

This composite group, with varying histories of human rights violations, has trampled the Congolese people. Many former rebels with criminal pasts and strong allegiances to their former leaders have been placed in high command positions.

Living off the population

There are no means of transport to move troops around, obliging soldiers to walk for up to two weeks to carry out military operations, often with a rifle slung over their shoulder, a baby on their arm, kitchen utensils on their head and their wives walking a few feet behind. When deployed in remote areas, they are often provided with no food, no pay and housing which at best resembles a refugee camp. The army is unable to resupply its troops, leaving them to fend for themselves — and to live off the population. In the worst-case scenarios, the troops go on rampages, destroying property, pillaging and committing acts of violence to protest their living conditions — with rape often following in the footsteps.

The FARDC has been described as an "income generating army," but that is true only for some of its members. Many commanding officers enrich themselves through lucrative businesses such as mining and lumber or by requiring a "commission" from soldiers under their command. But the majority of the 150,000 to 200,000 FARDC rank-and-file soldiers live in abject poverty.

This system does not allow the national army to protect civilians. It results in villagers creating proxy armies for their own protection, who then entertain the ambition of being integrated into the army for financial and political gains. If the FARDC is to be a credible force for peace and protection, it must be completely recast.

Army reform is a delicate task in post-conflict situations, requiring that various factions are brought together as a single army in a process called integration. Pre-requisites for success include safeguards such as vetting and training — but the Congo needs a tremendous amount of outside support to achieve these aims.

For a long time the international community has supported security sector reform in the DRC, investing in the defence, judicial and police sectors. Since 2003, it is estimated that Angola, Belgium, China, France, the Netherlands, South Africa, the United Kingdom, the United States, the European Union, the United Nations and the World Bank have spent an estimated figure of at least US$40 million annually to help reform the Congolese national army.

Unfortunately, essential aspects of army reform have been ignored. This is due to the absence of a coordinated strategy or common doctrine for security sector reform. Donors compete to lead the reform agenda and engage in incoherent and piecemeal bilateral projects.

Instead, donors and the DRC government should agree on a set of benchmarks upon which future assistance is dependent. A common doctrine must address issues such as cut-off dates for the integration of new armed elements into the army, vetting mechanisms, a common approach to training and the disarmament, demobilization and reintegration (DDR) of members of this bloated army who are not fit to serve. Those deemed ineligible should be moved into other sectors of labour-intensive work, notably infrastructure and road building, or agriculture. The doctrine would have to be discussed at the inter-ministerial level and be endorsed by the national parliament, after a thorough and open dialogue with civil society representatives.

Without a coordinated approach, the national army can hardly be transformed into a positive force capable of protecting its citizens, including against sexual violence crimes. The FARDC cannot allow perpetrators to seek refuge from prosecution for atrocities they committed. War criminals and other offenders must face the law and be excluded from the army. A vetting mechanism must ensure that new integrants do not have criminal records, and the government must ramp up its capacity to discipline and prosecute members of its armed forces who have committed human rights violations.

Key decisions about the size of the army and how it functions rest with the government of the DRC. But the government must protect its citizens from acts of violence, including rape. In most incidents of sexual violence, members of the army were either directly involved in committing these crimes or negligent in preventing them. Sexual violence can constitute a war crime and a crime against humanity, no lesser in gravity than other offences. We cannot turn a blind eye to the victims of sexual violence in the DRC who wait for a protection force that has been in the making for eight years — and counting.

When an army turns on its own people, the world must unite to redress the situation. Donors who support security sector reform must hold the Congolese government accountable for ensuring respect for human rights. I challenge the DRC government to genuinely engage in a completely new approach, and I challenge all major donors to accept nothing less.