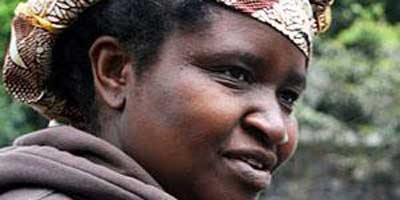 The Democratic Republic of Congo (DRC) has one of the highest rates of rape in the world. One recent report from the American Journal of Public Health estimates a woman is raped almost every minute in Congo. In North Kivu, one of the country’s most volatile provinces, officials say efforts to prosecute rapists are frustrated by flawed laws that pack prisons with poor young men while real rapists roam free in the countryside.

In the regional capital of Goma, central prison inmates have no beds or blankets and eat only a few hundred calories a day. Many say their only crime was being poor.

Serving his second of a 15-year sentence, Edouard, who provided no last name, says his troubles started when he fell in love and got married. His wife’s family originally agreed to the match for a nine-goat dowry, but Edouard had only three goats -- worth about $150. His brothers-in-law took him to the police and accused him of rape.

Most violent rapes take place in the countryside, far from law enforcement officials, says Simpeze. By the time a victim can report a rape -- often perpetrated by members of armed groups that operate outside the law -- the assailant is long gone.

Simpeze says the men in prison for rape are usually convicted under Congo’s 2006 rape law, which makes the age of sexual consent for a female 18 years of age. But some say the law is flawed because families in the countryside often do not know the age of consent, and their daughters typically marry much younger. According to the United Nations, the majority of girls in the Congo marry between the ages of 15 and 19, which leaves young husbands vulnerable to accusations of statutory rape when families squabble over dowries.

Defense attorney Frank August Muteba-Mukute says it is not just disputes over money that create bogus charges. Since the laws were enforced, he says, people have also used them to punish enemies.

Regional Minister of Justice Francois Tuyihimbaze Rucogoza agrees the rape laws do not account for local customs, but he defends them as necessary, arguing that strict law enforcement has reduced sexual violence in Congo by creating a deterrent. Written under pressure from international aid organizations that help Congolese rape victims, Rucogoza says organizations inflate statistics to attract donors and pressure law enforcement to fill jails cells, with actual rapists or not.

Despite the relative success of Congolese rape laws -- since their 2006 enactment, more people now know rape is a jailable offense -- Rucogoza says the rough terrain of rural Congo allows many violent rapists to elude law enforcement. Roughly the size of Western Europe, the Congolese countryside is hard to travel, with thick jungles, few or no roads in many places, and sparring militias.

But activists say without strict rape laws and constant pressure to enforce them, the flood of victims pouring into hospitals and aid centers will never cease.

Justine Masika, director of "Synergy of Women for Victims of Sexual Violence," while the government has prosecuted more rapists in recent years, it is still only the poor who go to prison.

Despite the increasing number of convictions, she says rich people, high-ranking officials and militants do not usually go to jail for rape, but poor men with young wives often do.