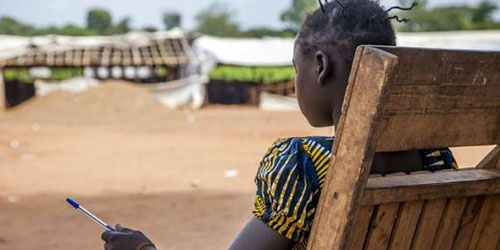 A former child combatant, 14, who used to be a member of the anti-balaka rebel group sits outside her school building in Bambari, Central African Republic

When two of Josephine's uncles were murdered by armed cattle rustlers on Central African Republic's southern border just before her twelfth birthday, all she could think of was taking revenge. The schoolgirl was an easy target for recruitment by mostly Christian militia groups battling fighters of the Muslim Peul tribe in the flatlands of the eastern Ouaka region.

"The Peuls had killed my uncles and I was ready to commit reprisals," said Josephine, now 14, sitting in a bright yellow dress under the shade of a mango tree in her school playground.

"Our job as children was to decapitate the bodies of dead enemy soldiers," she said, her face blank and betraying no emotion.

Children have been enslaved and used as fighters and human shields by rival militias who have recruited up to 10,000 under 18s since largely Muslim Seleka rebels briefly seized power in 2013, triggering waves of violence and reprisal killings, according to the U.N. children's agency UNICEF.

It was during a gunbattle across the lawless, mineral-rich floodplain in 2013 that Josephine was recruited by the so-called anti-balaka, a largely Christian militia that tried to inflate its ranks with children who could be easily mobilised against the Peuls.Her brigade of 111 soldiers included 42 children at the height of the conflict in 2013, during which the opposing militias used blood-thirsty tactics, ransacking villages and stealing livestock, said Josephine, twiddling a biro in her fingers.

"The Peuls had no hesitation in killing my uncle and his brother so for me it was the same. I got it out of my system," Josephine said. Her name has been changed for her safety.

The red-soil scrubland of Ouaka is some 200 km from the capital Bangui, where Pope Francis was due to arrive on Sunday seeking to heal Christian-Muslim divisions.

His visit comes with the city still tense from a fresh bout of fighting in September. In Ouaka, the anti-balaka are often involved in deadly skirmishes with ethnic Peul fighters of the Union for Peace in Central Africa (UPC), a Muslim splinter group of the Seleka coalition, which controls CAR's northeast.

Nearly three years of inter-religious conflict in Central African Republic have been characterised by shocking brutality and abuses on both sides. A number of ex-child combatants have told UNICEF they were forced to disembowel deceased pregnant women and to kill their own parents as a form of initiation into the armed group.

But the proportion of under 18 year-olds in rebel ranks has fallen sharply, UNICEF said, spurred by the signing of an internationally-sponsored pact in Bangui, in May, under which the armed factions agreed to demobilise all child soldiers as part of CAR's transition towards elections now set for Dec. 27.

More than 5,000 children have been released from armed groups since the beginning of 2014, the U.N. agency said.

Josephine, who stayed with the anti-balaka for two years, was one of 1,300 children, 213 of them girls, to be released as part of a UNICEF scheme this year which presented her with a choice - go back to school or to start a business.

"I turned my back on the armed groups and decided school was the way forward," said Josephine, suddenly distracted by the uproar of songful children bursting out of classrooms in the heat of the early afternoon.

In Ouaka's main town, Bambari, where a river divides Muslim and Christian communities, former child combatants have set up businesses with sponsorship through a local non-governmental organisation (NGO) called Nda.

"I used to carry weapons," said shaven-headed Mahmoud, 16, an ex-UPC member whose real name has been changed.

He spent two years with the UPC, whose leaders also forced him to carry out menial tasks such as cooking and cleaning equipment.

"I used to think being a soldier was the way forward but now I want to make clothes for money," said Mahmoud, his eyes lighting up as he drew green cotton from an a rainbow of spools in a tiny mud-walled tailor's shop in the town's main market.

A $300 grant from UNICEF, paid in installments, gave him the capital to buy textiles and a sewing machine, which he uses to stitch clothes, making him one of the more successful ex-fighters to enter the rehabilitation programme.

Others can be reluctant to leave the armed groups fearing they may be stigmatised in their home community after playing a role in the conflict, said Benoit Daoundo, UNICEF's head of child protection programme in Bambari.

Daoundo said he was concerned that fresh tensions in CAR, which saw an upsurge in fighting two months ago, had created fertile conditions for children to re-join the rebels.

The violence caused the postponement of internationally-backed elections to the end of the year, but both the UPC and the anti-balaka have said they are adhering to the U.N.-backed process to release children from their ranks.

"We have already freed all the children associated with our group. They are no longer part of the UPC," Ali Daras, the UPC's leader, told the Thomson Reuters Foundation in an interview in Bambari, close to the border with Democratic Republic of Congo.

Daras, dressed in a white shirt, and his young uniformed fighters, many of them ethnic Peuls, control Bambari, a vital gateway to barely exploited diamond and gold mines that analysts say could one day transform CAR into an export powerhouse.

Despite assurances from Daras and anti-balaka commanders that those remaining in their ranks are all over 18, the U.N. mission, MINUSCA, whose 10,800 uniformed peacekeepers patrol towns and cities across the country, is unconvinced.

"The armed groups have not let go of all their children, despite some notable successes," said Diane Corner, Deputy Special Representative to the U.N. Secretary General in Bangui.

Despite progress, there are still some children beyond reach because of the intensity of ongoing fighting and the reluctance of the armed groups to adhere to MINUSCA's disarmament programme, U.N. officials say.

There are still several hundred children connected to armed groups in Lobaye, a prefecture west of Bangui, as well as close to the towns of Bossangoa, Batangafo and in Markounda region, in the north, said Speciose Hakizimana, UNICEF deputy country representative.

"We have little information on the situation in the east," she added.

UNICEF said the crisis in Central African Republic was one of the most under-funded of those it was responding to in the world, and that it had only received half of its required 2015 budget of $71 million.