Women Keen to Ease Greenhouse Effect on Their Ability to Provide 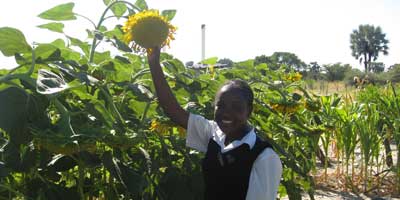 Women Keen to Ease Greenhouse Effect on Their Ability to Provide

A successful entrepreneurial programme in the north of Namibia that infuses farming practices with gender-responsive environmentalism may serve as a model for other countries on the African continent.

"Rural women in Africa are burdened with providing for the household. They are the farmers, working the fields, cooking and trying to make a modest cash income on the side," says Marie Johansson, the chief executive officer of Creative Entrepreneur Solutions (CES) in Ondangwa, Northern Namibia, in southern Africa.

"You see a woman, sitting at a service station selling bread and it seems like a nice way to make an income. But poverty profiles show that she gets up at three in the morning to prepare the dough, then she makes breakfast, then she bakes the bread, then she works in the field for a couple of hours, before walking the 10 kilometres to the service station.

"There she sells bread all day long, maybe making an overall profit of five Namibian dollars (0.75 U.S. dollars). After that, of course, it’s back home to cook, clean and prepare for the next day, all the way up ‘til bedtime at midnight."

For women already locked into a harsh existence, floods, droughts and higher temperatures are unwelcome guests that affect harvests and their ability to provide.

Says Johansson: "Men do mostly not have this vicious cycle of working and sleeping, so they tend to pay less attention when land issues are discussed in climate change adaptation workshops. But the women will say that the first thing they want to do is to secure the household staple food production, no matter what.

"A woman tends to take an interest in topics like conservation farming and drip irrigation because for her it is vital to get as much food from her land as possible. ‘How do I plan my farm with these floods?’ ‘Should I maybe diversify into rice production?’ These are the questions they face."

With a handful of other women Johansson started Creative Entrepreneur Solutions in 2007. She helped poor women in the townships to strengthen their small informal enterprises, or start new ones.

In 2009 the United Nations Development Programme (UNDP) approached CES to roll out a community- based adaptation programme in 20 communities in five Namibian provinces. The programme has been extremely successful.

"Our approach works because it is a bottom-up approach. If the donors walk out tomorrow, it will still work. Most donor-funded or government-initiated programmes fail because they don’t ask the people what they want and create no sense of ownership."

Instead, CES started self-help groups modelled on initiatives in India. Communities organise themselves in cooperatives to tackle climate change issues, or build up savings for business ventures.

"Our approach is twofold," explains Johansson. "Yes, we want to improve food security, but if there is an opportunity to create an enterprise at the same time, why not? We are interested in helping aspiring entrepreneurs to put their ideas into practice."

So, the women engage in conservation tilling and improved irrigation methods for their dry-land crops and, in the process, start to farm differently.

"Women now grow different plants that are better suited to different climatic conditions or have more market applications, or they switch to aquaculture. Climate change also brings possibilities. The recent floods have really opened people’s eyes to fish farming and they are now establishing ponds and dams. They also have started using energy-efficient stoves and they practise water harvesting."

Can programmes like this have a spill-over effect into the Southern African region? "I would think so," argues Martha Mwandingi, the Namibian head of energy and environment for the United Nations Development Programme (UNDP). Mwandingi oversees several large programmes relating to climate change adaptation, biodiversity and ecosystem management, including the project run by CES.

"Countries can adapt projects and tailor them to their own circumstances. Or ideas can be used straightaway, such as the climate change information toolkits that we developed for communities."

"Climate change impacts most heavily on women because of the multiple roles they play in a household, from farmer to provider to being the managers of the country’s national resources," says Mwandingi.

"Climate change compounds the burden of women because of the perpetuation of discriminatory gender-specific roles. All over the world global warming affects people, but especially the most vulnerable. Women belong to that group."

Mwandingi thinks more research is needed on the involvement of women in the climate change decision-making process. "There might be a gap there. I would love to see some studies on this. How many women sit on Namibia’s National Climate Change Committee, for instance? Or how many women are part of the delegations to the climate talks and the subsidiary technical committees?

"On the other hand, looking at Namibia, we have some powerful women in this field. The ministers of environment and finance - two vital departments - are both female, as are many directors of government agencies or significant research institutes.

"But it deserves a closer look. How are women for instance involved in the various climate change science centres across the Southern African region? And how does that involvement affect the decisions about the type of data to gather and what models to draw up?"

Mwandingi proposes that the Global Gender and Climate Alliance established at the UN Climate Change Conference in Bali in 2007 should be revisited on a regional level. According to its website, the alliance "works to ensure that climate change policies, decision-making, and initiatives at the global, regional, and national levels are gender responsive