Living with HIV and Forced Sterilisation in Africa 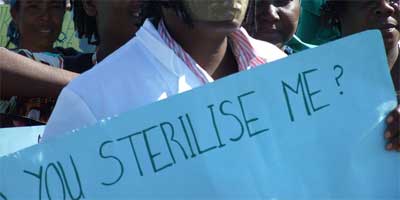 Recently, three women won their case in the Namibian High Court after they were sterilised without consent.

All three women have suffered considerable degradation in their quality of life, and the horrific nature of the surgeries they endured no doubt helped lead to the outcome of this court case. Attorneys have claimed that at least 18 women were sterilised by Namibian hospital staff because they were HIV positive, giving a worrying eugenic twist to the case.

The third plaintiff to be heard in the court was a woman using the pseudonym Ndinaomukulili Moses. After going into labour, she was told she would require a cesarean section (c-section), but afterwards doctors reverted to speaking Afrikaans, whilst Ndinaomukulili only speaks Oshiwambo. She was then anaesthetised from the waist down, and described only being able to hear a cutting noise.

'This one has been sterilised'

After being transferred to a separate ward, she overheard a nurse saying, “and this one has also been sterilised,” although at the time, she was unsure of what the nurse meant.

Since this ordeal, she has lost her family and suffered severe defamation of character. Her husband left together with all her children except for one daughter, after claiming her mother asked for the sterilisation so she could pursue extramarital affairs. Ndinaomukulili was ostracised by the community after accusations that she was HIV positive, following weight loss associated with her surgery. Another of the three plaintiffs suffered from near constant bleeding after she was sterilised, severely affecting her quality of life.

Despite the judge ruling in favour of the three women, he rejected claims that there was a eugenic element to the sterilisations, despite all three women being HIV positive. Although Namibian authorities maintain that forced sterilisation is not state policy for pregnant women with HIV, AIDs activist Jenny Gatsi-Mallet, who conducted research into the issue, claims that Namibian doctors have given evidence in suggesting that the sterilisations are government policy, and have been for some time. When interviewed, Gatsi-Mallet claims, "They are saying that these guidelines came into being when AIDS first came into the country, and I think that was in 2001, and it was a directive that says any woman who tests positive for HIV should be sterilized straight away”.

This case represents a turning point for human rights, women’s rights, and victims of similar circumstances throughout Africa. In South Africa, an appeal is currently under way by two women who claim they were forcibly sterilised by the government, because they tested positive for HIV. Their lawyer, Sanja Bornman is backing their claim, as part of the Women’s Legal Centre based in Cape Town, and expressed jubilation following the Namibian verdict. In an interview Bornman states, "The outcome in Namibia is of great significance to the South African women, coerced sterilisations of marginalised populations have a eugenics-based rationale, associated with trying to eliminate minorities, or reduce the numbers of those not desired by society”.

Another group of 22 women are appealing to the South African government for remuneration, after having also suffered sterilisation without informed consent. The twenty two women were interviewed by the Her Rights Initiative, and a report entitled, ‘I Feel like Half a Woman All the Time’ was submitted to the South African Health Minister, Aaron Motsoaledi.

The effects on the lives of the twenty two women were much the same as the Namibian plaintiffs. They have faced social stigma both due to their inability to bear children, and being HIV positive. Despite the evidence given in the report, the department of health has not acknowledged that sterilisation of women with HIV is common practice, but has vowed to launch an investigation into the twenty two cases cited.

Promise MthembuPromise Mthembu is the founder of the Her Rights Initiative and was herself sterilised following cesarean section. She believes that the practice is standardised throughout South Africa, but due to a lack of record keeping remains difficult to prove. Discussing the emotional cost of what was done to her, Mthembu claims, "The pain of coerced sterilisation never ends; at every point in your life you interact with it – if you start a new relationship, if a new child is born into the family, or if you start a new job, and people ask you about your life.''

The issue of forced sterilisation is neither small nor new in Africa. There are other legal cases currently underway in Kenya, Swaziland, and Zambia surrounding the issue, and given the scale of the issue, it seems likely that more claims will be made. Nicole Fritz who oversaw the Namibian litigation, describes her case as only ‘the tip of the iceberg’.

In 2009, the Rwandan government faced international criticism after it was alleged a law has been drafted, which would see the mentally disabled forcibly sterilised. In Kenya, reports of women being forcibly sterilised, at both government and private health care facilities, came to light late last year. As with the Namibian women, the victims were tested positive for HIV, and as a result, were coerced or forced into the procedure, and often did not understand, or give any reasonable form of consent.

Nicoleta Cambeta, was quintessentially emotionally blackmailed into believing herself unfit to bear children. Following her diagnosis, she received treatment from inside a government hospital, until one day a nurse arrived and told her she was suffering from ‘an extremely bad condition’. Cambeta was then shown severely deformed infants, and told that were she to conceive, her children would suffer similar defects. At no point was she told that drugs preventing the transmission from mother to child were readily available.

Other women were sterilised during cesarean sections, or told that if they did not undergo the procedure, they would die in childbirth as a result of their HIV.

It is clear that ignorance relating to the HIV virus and its treatment, as well as a lack of understanding of the most basic of human rights, has helped to spark this trend towards sterilisation, as a eugenic form of treatment. The case in Namibia does provide some hope; that other cases will come out of the wood work, and will result in both a change of attitude, and investigations into state policy on the issue.

Coerced sterilisation is clearly not exclusive to Namibia, and with luck, other African nations will also abandon the practice, and focus on treating HIV positive women, and observing their right to bare children. Although the amount of compensation has not been decided for the women in Namibia, based on their testimonials and that of other women, no amount of money could undo the damage that being sterilised invasively without consent has done, but hopefully this case will set a precedent for others across Africa.