Working at the Grassroots to Prevent the Spread of Ebola 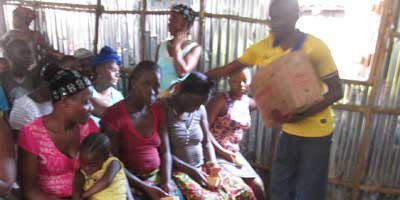 WYCF is actively involved in sensitising communities on protection and prevention of Ebola, including the distribution of soap to encourage household hygiene. Photo: WYCF.

Feeding the Hungry During Quarantine

During a quarantine in Kroo Bay, we worked closely with Street Child to feed 400 hungry mouths.

Alongside regular Ebola sensitisation and prevention training, we've been giving out soap to boost household hygiene.

At the end of each training session we hold Q&A with families and community members. 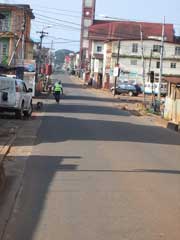 "The number of Ebola cases continues to rise.

People are unhappy with the burial teams because of the way they are handling the dead bodies. It is viewed as disrespectful during burial. Our cultural practices conflict with medical requirements.

Family members are not informed as to what is going on once their relatives are taken to isolation units or treatment centers.

There are mixed feelings in our communities about the hospitals, especially around the medical support given to suspected or confirmed Ebola cases. Some in the communities believe the injection given to the sick is what is actually killing people.

People who were given soap by government health workers during the nationwide lockdown refused to use the soap for fear of it being injected with the Ebola virus.

The Ebola ambulances are not well disinfected, which contributes to infecting suspected cases.

People try to politicise the crisis by saying the incumbent government plans to reduce the number of voters in Kailahun District, a stronghold of the opposition party (SLPP), by spreading the virus there.

The miss-handling of quarantined houses – with police only staying on guard from 9 a.m. – 5 p.m., means suspected cases walk freely around the communities.

There are not enough dispatch teams to collect dead bodies from houses and some stay for over three days.

The lack of a well organized contact tracing team leads to wide and rapid increase in the number of infections."

Very sadly, we've decided to postpone the start of A Safe Place on Stilts until we can be more certain about Kroo Bay's status as a community, which is at risk of rapid infection. We will review the situation in early December.

Nonetheless, final designs are currently being drawn up. A contractor has been identified and we're in the process of writing up an agreement. The land is clear and ready for building.

We are pleased to report that the building work at George Brook is on schedule.

We estimate only two – three weeks until completion.

Developing World Connections has launched a campaign to ensure we have funds to support relief efforts in George Brook and Kroo Bay.