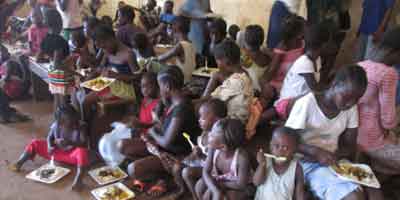 Sierra Leone has faced and continuously faces serious health problems which adversely affect several sectors of the country's development pillars as a result of the outbreak of the deadly Ebola disease in the country.

Ebola started in Kailahun District in May 2014. Now all the 14 Districts in Sierra Leone have reported confirmed Ebola cases.

According to the World Health Organisation (WHO), this disease has claimed over 4,000 lives in Sierra Leone and its neighbours – and it is expected to triple to 20,000 in West Africa by November if nothing is done, but the best-case scenario is, with interventions, that the virus spread may be over by 20 January 2015.

This disease has seriously threatened the shaking economy of Sierra Leone; prices of commodities and other goods have increased significantly, affecting the living conditions of vulnerable parents/guardians – and which indirectly affect their children’s rights to food, life, and good, safe health.

Outreach to Children of Slum Community

In the face of this emergency crisis, the government of Sierra Leone announced a three-day house-to-house nationwide lockdown campaign from 19–21 September, 2014. The objective was to encourage people who are affected with the Ebola virus to present themselves for treatment and also to take the correct message to people who do not believe that the Ebola disease is real.

In regards to the three-day nationwide lockdown, We Yone Child Foundation and its partner, Street Child, took note of where these children would find themselves - as police, soldiers and other forces patrolled throughout the corners of the city – but not in the slum communities.

Therefore, We Yone Child Foundation and Street Child carried out a three-day feeding programme to feed these vulnerable children in the Kroo Bay community twice a day.

WYCF will continue feeding programme when there is a national lockdown. Currently, we are running a prevention and protection awareness raising programme in Kroo Bay every two weeks of the month.

We distribute soap and teach children and families about basic hygiene.

The other key activities carried out were a clear demonstration of hand washing and communicating a clear message to the children to avoid contact. This was carried out by Martha Davies, Senior Progromme Manager from Street Child.

Other staff from WYCF, Future for Chidlren (FFC) and Street Child also helped in organizing and directing the distribution of food and water to the children.

We were so happy to see full participation of local people like Mr. Kamara, Nabie and other young people helping us in organizing the children.

Initially, Street Child targeted 50 children, but on the first day, they received over 250 vulnerable children looking out for food.

As a result, Street Child contacted WYCF to help with funding to add 100 additional children, bringing the total to 150 children with two days feeding twice a day. On the last day, we fed over 250 children; we had to re-wash the dish-plates that had already been used by other children to dish out food to the overwhelming number children waiting in and outside for food.

To impart the necessity of good hygiene, we we instructed each child to wash their hands before they entered the hall.

Many items and services were required to feed all the children we assisted. These include: