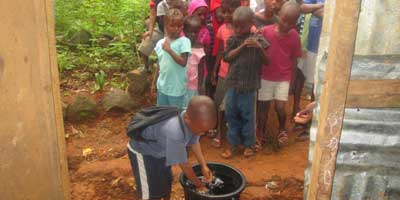 We assume the Ebola virus will reach George Brook and Kroo Bay. Our response reflects this as we secure meetings with the YMCA, expand our sanitation and prevention service, and join in with national action plans.

School closures cause concern to our parents. They tell Santigie [founder of WYCF] that without school, their children will be drawn to gangs and prostitution.

The cost of living continues to rise. Curfews are in place across the country. Movement between major cities is restricted.

We are part of a coordinated national response to Ebola involving 150+ organisations, led by WASH-Net.

We want to encourage as much support as possible for Street Child's Ebola Crisis Appeal..

For the last month, we have been holding regular Ebola awareness and prevention sessions in Kroo Bay (George Brook kids go to the provinces during holidays).

An Italian clinician, Marta Lado, currently working in Connought Hospital, has been helping with our Ebola prevention programme. Over 300 people attended one session. WYCF is working with health experts from Connought Hospital. The lady mentioned, Marta, has been extraordinarily helpful.

We are very sorry to say that the eight volunteers due to arrive from Michigan University have cancelled their trip in light of the Ebola threat. A great shame, but a decision we respect and a group with whom we will certainly remain in touch.

Change Can be Terrifying

Photo by Santigie Bayo Dumbuya, founder of WYCF.I have learned and re-learned an important lesson recently: change can be terrifying.

For people who have experienced war, been uprooted, fled and settled on land they can never legally own, the instinct to resist change is as strong as their determination to survive.

This is probably Development 1.0, Lesson 1: No matter how intrinsically good and logical your proposition, the 'beneficiary' will often decline the offer. It will be frustrating and you will feel defeated by their seemingly irrational response. But, fear and anger are like a lead veil to good and logical reasoning.

When you realise this, the tactics change.

The word 'reason' is transformed as you explore new tactics involving community power structures, short-term thinking (with the long term in mind) and lots and lots of patience.

This insight was prompted by a recent experience in George Brook involving the formalisation of teacher's wages and school fees.

Both schools completed their end of year exams with particularly high marks showing in George Brook, and great improvements being seen among certain kids in Kroo Bay.

We are recruiting new teachers for Kroo Bay. Applications have been received from Kroo Bay residents and written tests completed by eight individuals, two of whom show strong results. Santigie and Amar (our amazing British volunteer) have conducted interviews.

Land Purchased for A Safe Place on Stilts

We have completed the purchase of land in Kroo Bay for A Safe Place on Stilts.

Builders have started work again in George Brook where we hope to finish the school by November.

Art Exhibition in London for WYCF

WYCF will feature in an art exhibition in central London with a beautiful series by Michelle Pearson Cooper.

Available for viewing in the Royal Opera Arcade Gallery from 13-18th October, 10am-7pm.

Rosi Aryal, an Australian studying an MA in Anthropology in the Netherlands, has completed her field research and volunteering in Freetown. Thank you, Rosi!

An unusual request this month. We implore our donors and supporters to get behind Street Child's Ebola Crisis Appeal.

An organisation of WYCF's size is not capable of responding to this crisis at the scale and depth being achieved by Street Child so please, this one time, divert your attention to their crucial intervention.