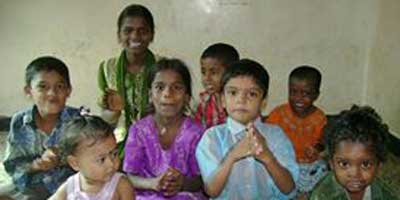 Helping Kala - Another Flower for Poonjolai

Her father died of cancer and her widowed mother had to take care of Kala and her two sisters. Kala was admitted into a school in Trichy and she was made to stay in a hostel nearby. After a month in the hostel, the meagre food and the tiring chores allotted to her showed on her.

Also, they gave her little time to study.

Once her mother came to know about this, she came rushing only to see her daughter transformed into a person she had not seen before, an exhausted and malnourished child robbed of her childhood.

Kala’s mother was devastated at the very sight of the child; her dream of sending her child to the school could be shattered if she did not find a healthy atmosphere for her daughter to live in.

That is when she inquired in the neighborhood and came to know about New Life and the home run by us.

She met the warden and narrated what had happened. When we confirmed the truth of their experience, our New Life field staff visited Kala’s home to check whether she was eligible for admission into our home.

The family was found to be very poor and they needed support.

Hence Poonjolai (the name of our home, which means flower garden) was decorated by another blooming bud, Kala.

When asked why, she said,

“I can’t have meals three times like this when I go back home. My mother cooks in the night and the same food is taken in the morning. In the noon we don’t eat anything. Also. I should go out for coolie work as we need income to take care of our mouths.”

This is the plight of many of the children in our home.

Unfortunately, not many children are as lucky as Kala to get a good education, adequate food, and a secure home with our staffs’ warm support.

New Life will strive to nurse many more buds.

Three colonies of Dalits1 in Dharmapuri, a town in Tamil Nadu, were burnt as an after effect of the suicide of a father of an upper caste girl marrying a Dalit.

This was followed by a mob attack and violence in Marakannam near Puducherry in India in 2013.

Activists see this as the rebuttal of the upper caste people against the gradually acquired independence of the Dalits over a period of time. Besides the inter-caste marriages, Dalits are developing economically and socially these days, causing an itch to the intolerant dominant castes who enjoyed all the privileges until recently.

People can no more find 'submissive' Dalit labourers for their farming activities. This has kindled the fire and resulted in the communal clash in Dharmapuri in 2012 and in Marakkanam in 2013.

Such clashes prove that we, the activists and people who work in the development sector, have to work hard in the subsequent years to come to eradicate this re-born conflict.

This “conflict” not only includes the economic and political blocks of the society, but also the mental conflict of the people which refuses to tolerate the “other”.

They sell their agricultural produce (mainly cashew nuts, tapioca, and jack fruit) to the people living in the towns of the plains.

New Life has been sending a team comprising of a doctor, a nurse, a lab technician, and a driver to visit the people in the hilly villages daily, since May 2013.

The team provides curative care, reproductive care, ante-natal and post-natal care. and refers any critical case to the nearby Primary Health Centre (PHC).

The team even goes to the places where the tribal people work as a cluster under the MGNREGS (Mahatma Gandhi National Rural Employment Guarantee Scheme).2

Since the team reaches out to the people, women now have access to health services and avail them. The women are very happy now.

Earlier, though they had a PHC in the hills, they could not avail the services as they had to sacrifice one day's wage if they had to go to the PHC. The transport facilities are also very poor in the hills.

Empowering Communities With the Courage to Report Abuse

A rapist of a 7 year-old girl has been imprisoned for seven years.

We provided human rights and child rights awareness programs to that community, and that gave them the courage to take the matter up to the police.

This has motivated us to spread awareness to all the people we work with.

We are confident that this will create fear among the sexual abusers and will decrease the instances of abuse in the due course.

2The NREGA scheme aims to enhance the livelihood security of people in rural areas by guaranteeing hundred days of wage-employment in a financial year to a rural household whose adult members volunteer to do unskilled manual work.