India: Success Stories from the Grassroots 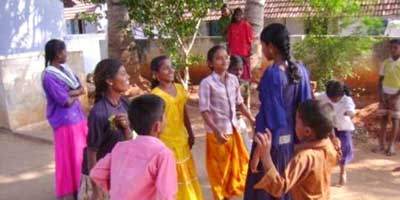 Personal Success Stories from the Grassroots

Helping Children Through Health and Education

Suresh Kumar(10) and Sumitra (9) greeted the chief administrative officer – to her astonishment, in English, which was totally different from the way in which they would have, a year ago.. They are from a poor family.  His parents were not able to spend much amount for their education.  His father is physically challenged, and mother is mentally ill.

With the support of New Life, they are continuing their studies in a residential school.

Now they are able communicate in English with others and are performing well in the school . The parents are also very happy to see their children’s growth.

Mary Anjala is from Varaganeri (Near Gandhi Market) in Trichirappalli district. She is 15 years old. Her father is working as a load man; her mother is a homemaker.

Mary Anjala has a hole in her heart.  She is a very intelligent girl, but due to her health condition, she is not able to concentrate on her studies.  She could not sleep at night without medicines; however, she was not taking medicines properly and could not eat healthy food because of her poverty.

When we were informed about the child, New life supported her and provided medicines and healthy food.

Because of continuous counseling, she is taking medicines regularly now.  Her health condition has improved and she is undergoing a surgery in the month of July.

We hope and pray that she gets cured.

Twelve year-old Sathya is from a very poor family in Agraharam Street, Alakarai (Post), Thottiyam (Tk), Trichy (DT), Tamil Nadu. Her mother’s name is Kanniyammal, and her father is Krishnan; she has two brothers, Venkatesh and Kumar. Sathya, along with her mother and two brothers, stayed with her grandmother. Her father died due to a heart attack when she was much younger.

Sathya is studying 6th standard in St. Joseph’s Higher Secondary School, Somarasampettai, Trichy - 620201. Her elder brother is studying 9th standard in Thotiyam Higher Secondary School. After her husband’s death, Kanniammal is making a lot of effort to see that her children are getting educated. Sathya’s paternal grandfather owned lot of assets, but her uncle cheated this family and took away all the properties.

Her mother is now working as a daily (agricultural) labourer. With the very little income she earns (Rs.50/- per day), the family could not educate Sathya and her two brothers. So, her mother unwillingly planned to stop their studies.

New Life came to know about Sathya, her economical status, and went for their rescue.

Sathya was admitted in New Life’s Poonjolai (the home for children), and she is also admitted in the nearby school.

Sathya has shown remarkable progress in academics and is studying extremely well. Her ambition is to become a famous doctor.  Our organization is providing moral support and motivating her to achieve in her goal.

Empowering a Widow to Support Herself

Saraswathi is a deserted widow living with her three daughters in Kodappu Village, in Trichy district. Two of her elder daughters were married. Her husband Jayaram died four months ago due to asthma. He worked as village security in the Village Administrative office in Kodappu. Jayaram had to borrow a big sum from money lenders for his treatment. Saraswathi is an innocent woman and spent her entire married life within her home and was not exposed to the world. After his death she was very frightened and felt left alone to face life.

Saraswathi has five daughers; her elder two daughters got married and settled with their husbands. The other three girls –  Athinayagi, Nagalakshmi, and Radha are living with Saraswathi. Athinayagi and Nagalakshmi are working in a shop and earn Rs. 2000/- per month. Radha is not well. A few months ago, she was affected by typhoid and till now, she has not recuperated from her illness. She is very anemic and she is undergoing treatment.

With the Rs.2000/- earned by Athinayagi and Nagalakshmi, the four of them have to meet their living expenses, pay the loan dues, and Radha's medical treatment. This meager amount is not enough for them to meet all the expenses.

Saraswathi met our field staff and explained her situation. New Life's team analysed her situation and came to know that Mr. Jeyaraman cultivated betal leaves by taking land for lease, a few years back. Due to his health, he was not able to continue that. Saraswathi, too, had helped her husband in cultivation and knows about betel leaves cultivation.

Our team motivated Saraswhati to restart her husband's bultivation business, and use a donation to take the land for lease. Through this business, she can earn Rs.30,000 per month.

Poovammal: Training for Life After Prison

Poovammal got a loan from the money lender, but was not able to meet the loan repayments on a regular basis.

So, the money lender came to their home and shouted at them, using vulgar words. They became tense and beat the money lender. He got a severe injury and the police filed a case against both Poovammal and her husband Sudalai. They got a punishment of four years in prison. Currently, she has completed three years.

It was in prison that she met a counselor from New Life who visited the prisoners. She narrated her story to the counselor and shared her worry about her future, once she gets out of the prison.

Poovammal was counseled to undergo the livelihood training given by New Life, and began a programme learning to make incense sticks out of Sambrani (incense powder).

The training included the curriculum of making the incense powder sticks. The trainees were introduced to the raw materials used, where to purchase the raw materials, and market it. A hands-on training was given to make the stick.

Poovammal attended the training with utmost interest. She will be released in one year and she says she will take this up as her livelihood option.