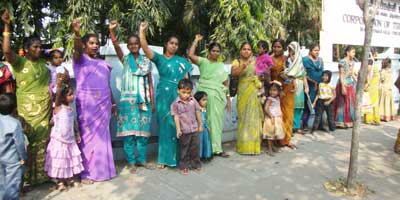 The state is facing a severe power crisis for nearly 10-12 hours daily, and the power cut is affecting the daily routine of people, especially the women, who are forced to get up early and go to bed late to adjust their timings of household chores to the timings of power availablity.

The impact is high on the working women. Students are also affected as this is the final examination time, and the poor children who could not afford to install the invertors, find it a big problem. On the one side, sleep is affected and hence, people are getting tired and not able to do their routine work effectively. On the other hand, small industries and their concerns are most affected. Productivity is much affected due to the power shut down; workers are also affected as their wages are decreased with less productivity.

Another major issue in the state during the last six months is the opening of the Koodankulam Nuclear Power Plant.    People are afraid as they may become displaced and have to deal with the radioactive poison; hence, the people in that locality and some of the NGOs are against that project.

The government blames the NGOs who are behind this – and the licences of some NGOs are cancelled by the home ministry.  This may affect the voluntary sector and especially those organisations who are activists.

New Life is proud to share that we participated in the NGO India 2012, a national-level exhibition and conference conducted by Guide Star and UBM India on March 16th -18th, 2012 in Guragaon. The products made by our members from the gypsy community were exhibited and sold there by the women who represented their community.

The gypsy women could sell Rs.5180/- worth of articles there. Mrs. Rajeswari, who participated in the exhibition, says “It is a rare opportunity for me to participate in such expos. This gave me a different exposure as I could meet people from different places of the country.”

Trainings were conducted to women prisoners from the self-help groups on group dynamics, credit discipline, and entrepreneurship and leadership skills. Sixty women participated in the Incense powder-making training which was given to the female inmates of the Special Prison for Women in Trichy.

Awareness has been created among the slum community on family planning and STDs (sexually transmitted diseases) by our health workers, and immunization camps were organised in all the target areas to ensure immunization to pregnant mothers and children;  212 were benefited by the camp. 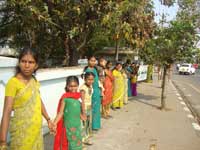 Join hands with us!