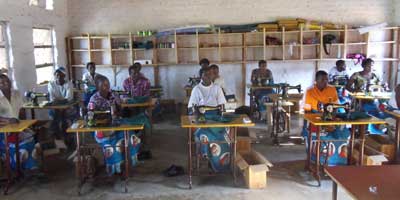 SURCOD's Gender and Village Savings and Loan (VSL) Project focuses on gender to improve access to justice for women and to increase initiatives that strengthen gender equality in Chididi.

Village tribunals still remain a widely reliable comfort zone for most victims in rural areas (baseline survey, SURCOD). They exercise their authority through traditions and customs of their areas.

The overall in charge of village tribunals are local chiefs.

The local chiefs are the custodians of culture and traditional rites (assessments, SURCOD). Village tribunals may also be a breeding ground for male chauvinism. It can also be thought that a disadvantaged class in society can possibly suffer from wrong judgements and poor mediation skills.

Therefore, cases related to gender-based violence (GBV) against children and women are treated as any other case.

For this reason, the project engaged the judiciary to help village tribunals make some reforms, as provided for by government.

Third grade magistrate, George Chimombo – to improve their skills in judgement and mediations, took the catchment area through the following reforms:

The sessions were highly interactive and by the end of the workshops some chiefs lamented having helped GBV perpetrators to commit even more atrocities.

“We ask SURCOD to reach out to our subjects as well with the same information.”, one chief requested.

Another made a very striking observation, “I almost know already the type of case when I see the complainants; I have been helping them to disagree; now I know.” The workshop yielded the results right away!

The magistrate told the participants that state laws and policies do not recognise traditional rites. Therefore, it is always important for village tribunals to refer matters they feel they cannot effectively handle to constitutional courts, or victim support units, because that is where pluralism and neutralism are exercised.

The law interpreter warned the chiefs that the supreme law will settle on their heads if at any time a complainant was further victimised, emanating from their poor judgement or mediation skills.

A Mother Group is a local structure comprising 14 members: 10 women, a head teacher, a local leader, a Parent and Teacher Association chairperson (PTA), and a School Management Committee chairperson (SMC). Each primary school has its own Mother Group.

The project has almost managed to connect the three branches to the Women Forum. The catchment area had the three sub-committees in place, but there was no coordinating structure; hence the formation of Chididi Women Forum.

In September 2014, the project assembled all Mothers Groups for familiarisation with Women Forum, in which Kuchene Women Forum was one of the organisers of the workshop (report available).

Also in attendance was the senior representative of the office of District Education. Each quarter presented their roles and responsibilities and the head teachers were allowed to give status reports of their institutions.

The emphasis was on a girl child – capturing enrollment, drop out and causes, selection to secondary schools, poor performance in class, and relationship between institutions and their Mother Groups.

It is a junior primary school, started in 1994 with classes 1 and 2. It was upgraded up to seven classes a few years ago. It has one building block demarcated into two classes and the rest sit under shade trees. It has three qualified teachers and the community sought two more people, as volunteer assistant teachers.

The recommended pupil teacher ratio is 1:60, but a teacher at Kaluwa carries well over that, by far.

The head teacher was quoted to say that his learners that pass to standard 8, either drop out of school completely, or risk covering 16 km on foot every day to Chiwephe primary school where class 8 is accessed.

One of them tried tools to attain gender equality is education, but girl children around Kaluwa School have thin chances to complete even a primary education. His Mother Group also disclosed that it finds it a little harder to counsel parents not to allow early marriages when girls are not going to school due to distance.

The head teacher reported that 49 learners had already dropped out in the first term.

The district education manager ordered Kaluwa to upgrade to class 8, effective immediately. A follow-up meeting encourages Kaluwa Mother Group to ensure retention and completion of education by girls now that their school has class 8.

The next collaborative meeting with education stakeholders will focus on deployment of more teachers at Kaluwa and construction of more teacher houses.

The visit to the school shows that they already had moulded bricks awaiting possible finances to start infrastructural development.

According to the January – June preliminary report submitted to VVF, two objectives were reported, but not met yet.

Two major developments have occurred to respond to these objectives:

The project is training 15 self-selecting women in tailoring and designing textiles. All of them are members of different associations under SURCOD.

The first phase started this month of October, 2014 and ends in the month of January, in 2015. The workshop is housed in one of the building blocks which the organization was offered after it was declared unsuitable for learning by the school authority. The organization had to refurbish it to make it habitable.

The finances that have enabled the tailoring project came from the U.S. Africa Development Fund. Fifteen sewing machines and accessories were bought.

This is an approach to set and compose associations into recognisable small business conglomerates.

Literally, Mafuwa are stones that are collected and arranged as a tripod, supporting cooking vessels during cooking. Mafuwa may also mean granting a young couple full, family independence after being under the umbrella of parents, or guardians.

This may also be suggested as devolvement of some powers and authority to lower branches. Devolvement or independence is granted after serving parents for a period of not less than two growing seasons.

The period allows parents/guardians to teach young couples several important things that include farming, resource mobilization, resource sharing, savings, caring for extended family members, and so on, and so forth.

Six associations have been mobilised and have since agreed to be under the new approach namely Chitsanzo, Chigwirizano, Chalachankhwali, Mtondo, Ndakanabodza and Tisungane. They have formed two clusters of three associations each.

Together with Glein volunteers, from Germany and Estonia, the clusters have already held three workshops and several normal meetings. Clusters were effected to increase focus and serve each cluster better, according to their vision.

Currently, the Glein volunteers are compiling a report from a livelihood data collection exercise conducted by the approach. The objective is to determine changes that will have taken place at an individual level after a year in Mafuwa approach.

The project does not assume that livelihoods have improved because women saved money and ploughed back profits. The approach will follow each woman at different stages to gauge livelihood changes taking place.

The above two are also responding to strategy 5 of the project, which is to empower women in the community, in business management-planning skills.

This strategy has the following activities which the project will also meet accordingly:

As alluded to in the biannual report, Community Victim Support Unit (CVSU) requires visibility both at local and district levels. The project has managed to gain support from Kuchene Women Forum. Kuchene’s partner, Actionaid, has donated different items to the unit to enable it to provide safe-haven services for victims.

Two associations of Chimtombwe, whose members neither read nor write, have started literacy classes.

The project has managed to convince government’s complimentary basic education program to include women from Ntchajo and Nsungwi into their literacy classes. The women were given start-up learning materials.

The two associations have challenges meeting on time. It is also becoming almost impossible for members that have missed time to pay a fee.

Everybody knows that the area has acute water problems, so many members give that as a reason for coming late. The head teacher of the nearby school also mentioned water problems as a major contributing factor for poor performance of girl children in class.

What crop of future women will the area harvest if girls are not doing well in class?

It is apparent from the look of things that status quo will be maintained if the water problem still persists. Women will still look at and regard themselves as inferior to their counterparts.