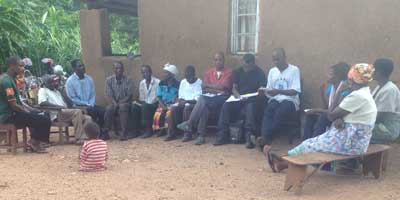 Protecting the Rights of Women

SURCOD - with funding from Volkart Vision - is rolling out a new gender project focused on protecting the rights of women in society. The first stage was to meet with traditional leaders, a community police forum, and victim support units (VSUs) for an assessment exercise to determine the functionality of social and local security structures in March 2014.

Security structures in the area consist of Crime Prevention Committees (CPC) in each and every village and one Crime Prevention Panel (CPP) at the GVH. The CPCs are accountable to CPP. However, since the structures were established, there has been no training conducted at structure level.

Chididi has one community Victim Support Unit located in Masimo village in the area of GVH Mkhutche. The facility was established by Social Welfare, Nsanje police, and Community Development Offices. The unit is not functional, as members have gradually been losing interest. Initially, the members agreed to have two people on rotation at the facility on a daily basis.

It has been some months since the roster was followed. The members have the interest to continue rendering their voluntary services but have asked for capacity development and wider publicity of the facility.

Women Reluctant to Participate in Structures and Committees

The participation of women in the current structures is undesirable. The traditional chiefs have lamented that women accept public positions in the community but later silently decline. The chiefs further said that if elected women come to the meetings, they prefer to sit at a distance from the other elected members.

The more these women are reminded of their positions in the various committees, the more they shun meetings.

Since most women are dependent on their husbands, sometimes orders from their husbands influence their actions. Women understand issues fluently when they are explained by fellow women.

The area is mountainous, and the road to the area passes through the mountains of Matandwe forest reserve. Chididi’s geographical position and weak phone signals pose a high risk of insecurity. The nearest police station is at Nsanje boma. Most cases die a natural death in the area due to the long distance to access police services.

An additional challenge to identifying abuse in the area is the knowledge gap of victims or their relatives. If an abuse does happen to be identified, it is often associated with tradition or culture. The most disadvantaged classes in this situation are children and women.

To better protect against gender-based violence, the participating groups developed a number of general recommendations as a result of the exercise.

The existing community Victim Support Unit must be revamped. There is a need to locate active women into the structure who will be able to handle women-sensitive issues. After the structure has members that are equally representative, then capacity development should follow. It is highly recommended that after the training, the VSU to be publicized to entire community. People in the area need to be aware of the unit to enhance ownership of the structure.

Community action groups must be established in each group village head, ensuring that women are elected into management positions.

Women’s involvement and participation must be encouraged and increased. The barriers keeping women from most committees should be identified and challenged. In addition, the establishment of woman-to-woman forums could be a better vehicle to inform the project about violation of human rights of the vulnerable society.

5. Promotion to the community

Community members must know which structure to turn to regarding any given issue. The promotion of the existing structures can be accomplished at the GVH level or through an organised open rally involving all GVHs in the area. The event will sensitize the community about the roles and responsibilities of each local stakeholder.

Security is a foundation of every development. For the overall goal of the project to be achieved, security of the area must be tightened from the grassroots (village). The communities need to have ownership of the structures to achieve sustainability.

The action plan outlined by this exercise will work to ensure that domestic violence, child abuse, sexual abuse, and gender-based violence in the area will easily be reported, referred, documented, and managed.