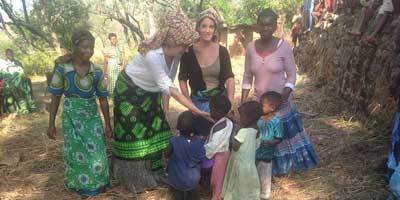 I was born and raised in Chididi. During my childhood, i experienced the many hardships of this mountainous area: no road network, no electricity, no boreholes, no trading centre, and no hospital. Even today, the situation remains almost unchanged.

And that is exactly why I decided to create an organisation that would focus primarily on improving the livelihood of the people in Chididi.

We are grateful for all the help we are given. This year, we have been fortunate to have several overseas visitors. This has made a big difference.

Sally: 'My Journey to Nsanje'

Sally was in Malawi for six weeks to write a report for the Irish Times, focusing on lives of Malawian women. Safe World for Women recommended to Sally that she visit SURCOD and put us in touch.

Sally interviewed some of the women from the Savings Project. We drove her to Chididi, where she spoke with three ladies, with help from Joseph Nchiza who acted as an interpreter.

Through GLEN, young Europeans can do informative internships in the South and built their capacities in development co-operation and global education.

Our first two international volunteers, Kadri and Mathilde, from Estonia and Germany respectively, stayed with us between July and October 2013 and took part in a project called Economic Empowerment for the Women in Chididi.

As part of their GLEN internship, Kadri and Mathilde have been deeply involved with the women of Chididi. They even lived close to them, in Mchacha village. The picture was taken during one of the trainings that the two volunteers organised to stimulate the women’s entrepreneurship and help them plan their business ideas.

In total, the girls held 24 workshops with six different groups, focusing on the importance of saving, being in a group, having clear rules, and doing business.

They also trained SURCOD’s local volunteers for them to continue the good work after the volunteers complete their stint and go back.

Unlike Kadri and Mathilde, Chris is not here through GLEN, but has come on his own.

During the three months he is here with us, he will focus on organization development, especially by modernizing SURCOD’s website, improving communication, participating in documentation and evaluation work, and looking into fundraising opportunities.

We visited several of the participating families to see the progress of the construction of their animal shelter. In exchange for the money that the groups received to buy animals, they were required to build a shelter that will guarantee the animals’ well-being.

In October, SURCOD went back to visit the local schools for a few hours. On Friday, October 11, we visited Chididi Secondary School where we spent the entire morning with teenagers.

We sat down in the classrooms and attended a biology lesson, an agriculture lesson, and a life-skills lesson. It was all the more interesting for Mathi, Kadri, and Chris – our three international volunteers – as they are not used to sitting in crowded classrooms and learn about agriculture or “self-awareness.”

Around lunchtime, all the students were gathered in the yard, where SURCOD’s director made a speech about the importance of studying hard and believing in oneself in order to improve one’s life.

The three volunteers reinforced that message by introducing their student backgrounds and explaining how they had spent years on school/university benches.

I spoke to the children about early marriage and early pregnancy as two of the main causes of dropping out for female students.

The next Monday, we went to the primary school. After briefly listening to the many pupils of the Standard 1 sing for us, we went straight to Standard 8, the last class taught at the school, where we attended a Chichewa lesson and an agriculture lesson.

At the end, we introduced the idea of opening a youth club in Chididi and asked the pupils what should be incorporated into such a club. A further needs assessment will be necessary, but some of the activities that they mentioned were sports, debates, quizzes, poetry, arts and crafts, languages, and games. The visit ended on a very happy note as we divided ourselves into groups during our last lesson with the Standard 7: expressive arts.

Each group chose a traditional Nsanje dance, which we rehearsed outside for some minutes before performing in front of the class.

October 16 was a joyful day for Chididi. More than 100 people, including local leaders and most of the women from the savings groups, were gathered to spend a last day with our two international volunteers.

After listening to various speeches, we danced marimba, a traditional dance, where people wiggle and move around the musicians who sit in the middle and play on a giant wooden xylophone. Then, Mathilde and Kadri sang (in Chichewa) to thank everyone for the great time they had had in Chididi.

To the women’s surprise they were asked to stand and a long procession started.

Along the music, the women, organized in their respective savings groups, danced toward the volunteers and showed their generosity by offering them lots of gifts: chitenje (traditional cloth), small wooden chairs, bananas, eggs, and even money. Indeed, it is part of the Malawian culture to give something to those who are leaving. Even more so is to share however little you have. In line with that tradition, the women from Chididi really showed their gratitude.

They will not forget the times spent with Kadri and Mathilde.

During the three months, the two volunteers have actively worked with the savings groups’ women through various trainings. Now, it is time to say goodbye. Kadri was both happy to go home and sad to leave the wonderful people of Chididi. Mathilde, on the other hand, expressed that she was neither happy nor sad but excited about the future and meant “see you soon” rather than “goodbye.”

Their stay in Malawi was short, but they will really understand the impact later. Satisfied with their work, both women agreed that their cooperation was excellent, especially when it came to create visuals and conduct trainings. Mathilde explained that the interaction with the women, most of them illiterate, was at times challenging but above all giving. A memorable experience for Mathilde was when some women told her whole-heartedly that “she got fatty.” Of course that was a compliment! Mostly, the two women were amazed by the people’s generosity.

Kadri recalls the day when a friend came to their house in the morning and gave them a chicken. Slaughtering it was another story, however. That generosity peaked during the farewell ceremony as they were given many gifts. For sure, they will remember that cheerful day, rich in dancing, singing and laughing.

Are they a bit more Malawian now?

Kadri thinks that she is. If there is no water, she will simply wait without complaining. Mathilde enjoyed how “light” life is here compared to her stressful and individualistic home city of Berlin.

One thing is sure, they have learnt a lot from the people in Chididi, and it is only a matter of time before we see them again.

With the support of Volkart Vision, a Swiss foundation, SURCOD is currently implementing a two-year pilot savings project, called Chididi Women’s Group Savings and Capital Building Project. The project’s main goal is to empower women by helping them become financially independent through their savings groups.

This overarching project allows us to regularly meet the women and carry out sensitization campaigns, about HIV/AIDS or malaria for instance, and to improve the community through various initiatives such as business trainings or an animal husbandry project.

SURCOD was created in 2011. As a Malawian local NGO, we are still young, but we know that we have potential and we want to grow. There are many things that we can accomplish in the near future, starting with an improved communication.

We know that to get people’s support, we need to create a connection and talk about what we do; so why not send out a newsletter! Since we work mostly in Chididi, we have decided to call it The Chididi Bulletin. As we are still small, we will begin with sending it only once every two months. We are also open to suggestions and comments.

Help Us Choose a Great Logo

We feel that our logo looks old and is redundant. We’re looking for someone, professional designer or not, who could help us create a more modern, simple, and accessible logo. Are you interested?