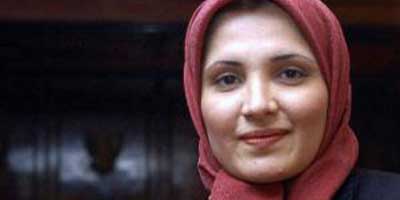 Sentenced to 6 years and 91 days

Hengameh spent several years in the UK, doing post-graduate studies at the School of Oriental and African Studies (SOAS) at the University of London.

At the time of the presidential elections in Iran, in 2009, Hengameh returned to Iran.

She worked as the adviser on women's issues to presidential candidate Mehdi Karroubi, General Secretary of the National Trust Party (Etemad Melli Party), of which she was a member.

She was in poor health, with an ongoing heart condition which required regular medication.

"Were the individuals who beat me in the basements of Evin Prison brought before the [prison] disciplinary committee?"

Hengameh was initially held in solitary confinement for 50 days, before being transferred to a cell with another woman, and was held for over 4 months without charge.

She says that she was tortured and otherwise ill-treated while in detention.

This included threats that she would be executed and she was subject to a mock execution.

She also says that her interrogators threatened to arrest other members of her family.

Hengameh went on a hunger strike in protest of her continued detention.

Officials threatened to further punish her if she continued with her hunger strike.

Amnesty International called for her urgent release, as a prisoner of conscience.

Support from the UK

On the 29th September 2009, Miriam Elia, a UK friend of Hengameh - and popular comedian - arranged for a 'Free Hengameh' fundraising event in London, with other high profile artists.

Miriam had met Hengameh several years earlier, in 2006, at a bus stop. They struck up a lasting friendship and met regularly, discussing cultures and women's issues, and sharing humour.

Miriam tells Safe World that, when Hengameh got news of the London event, she was hugely uplifted to know of the support she had.

She was accused of taking part in the post-election demonstrations, supporting a campaign to end executions by stoning in Iran, giving an interview to the media, collecting signatures for the 'One Million Signatures Campaign, signing numerous statements addressed to United Nations human rights bodies about human rights violations in Iran, and publishing articles on her blog.

On 30th November, Hengameh's lawyer, Mohammad Mostafaei, was informed that his client had been sentenced to 6 years and 91 days:

5 years for 'gathering and colluding with intent to harm state security', one year for 'propaganda against the system' and 91 days for 'insulting the President'.

The lawyer lodged an appeal against the conviction and sentence.

25th February: Hengameh was summoned to the Ministry of Intelligence investigations' office to answer questions and was re-arrested.

27th February: Mohammad Mostafaei was still not aware of the reasons for her re-arrest and went to the Revolutionary Court where he was shown the Appeal Court ruling.

On the 28th October, 2010, Hengameh was finally released from prison for medical treatment - a series of tests including an angiogram.

However, this treatment was not completed and her request to extend the treatment was denied, with no reason given. On the 15th November, 2010, she was returned to prison against the recommendations of her physicians.

On her return to prison, Hengameh began a hunger strike and her health further deteriorated so she was transferred to Evin prison's infirmary.

Hengameh was transferred back to prison, this time to the Methadone Ward of Evin, where prisoners who are drug addicts are detained and where there is a further ban on telephone calls.

She was subsequently moved to a cell which she shared with Zahra Bahrami, Dutch Iranian prisoner and mother of two.

Hengameh's cell-mate, Zahra was hanged on 29th January, without warning and without the knowledge of her lawyers.