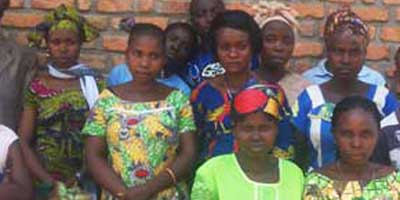 Reaching Out to Children on The Streets 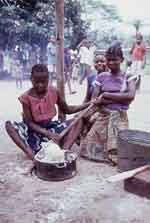 In the last three months, COFAPRI has moved forward. In this vein, we gained more members –  particularly children, both girls and boys.

"I could not tell anybody [about] this sad event because he could kill me this time... I will not tell you what mothers never tell to children…"
Abused woman.

The majority of them are street children, and others come from very poor families that cannot even afford paying for clothes for them.

In our organization, we have discussed the issue of these children, and we decided to help them little by little. As we do not have enough means, we are grouping them into teams where they can be reeducated so they can understand the importance of leaving the streets and joining society.

In case we gather huge means, we will send them to school; and for those who cannot improve well in school, they can still be taught some jobs that will be helpful to them and their families in the future.

The boys have been given a football for playing, and our team on the field are organizing them in small teams of football, just to take them off of the streets.

Prior to the sensitizations that are being conducted in different villages around Bukavu – the main city of South Kivu province, in the Democratic Republic of the Congo (DRC), Congolese Females Action for Promoting Rights and Development (COFAPRI) was only available in four villages: Ntendera, Burhyogo, Munya and Cibimbi.

However, as a result of the campaigns of our teams on the field, three new villages have joined COFAPRI. Those villages are: Mushego, Namurhambye, and Lukanada. Thus, COFAPRI is now operational in seven remote villages of South Kivu, a province that is famous for the awful rapes committed to women during the consecutive wars that lasted almost 17 years – and whose consequences are hugely noticeable among women, girls, and children in particular.

It is they themselves who chose to feed piglets as they believe that once they grow, they are more profitable than goats because pigs produce quickly compare to goats.

Now COFAPRI has the total of twelve piglets among all its members. The members who were feeding hens and goats have changed their minds and also bought piglets, because for them, pigs produce more than hens and chickens.

Membership Dues Are The Start of Group Budgets

"The woman – though injured, cannot tell the event to anyone, for fear of being more molested; that is the village...
What we did is that we took her to the nearest dispensary, and her arm was dressed. We accepted all the charges."
Mugisho Theophile, co-founder, COFAPRI

All the members on the lists of COFAPRI now number 203. As before, the new members joined in, the former members were asking if they could fill in the forms of membership.

I was informed of this and I have sent them the forms to complete. Once all the forms are filled in, we will then be sure of how many members we have in total.

To fill in the form, each member must pay an amount of $2US (two dollars), considered  as the fees for membership. This money will be put on the account of each group, as this will be the start of each group’s budget. In each group’s budget I personally gave ten dollars as the amount to open their savings –  on which each group starts when they pay the forms.

We also discussed that all the members must seek means to grow their budget, and in the end, we will sit together, see how much each team has, if possible I add on something to them, and then decide how to use the money.

If things continue to go the way I saw, I will feel very much honored to have open for the women and girls of South Kivu  a way to work and gain life.

We are also now morally encouraged by the local leadership and the Catholic church in place.

Besides the ten dollars I offered to each team, I bought a telephone to the global team of  COFAPRI  and it was given to Mr. Mushagalusa, our coordinator in Nyangezi.  Now COFAPRI Nyangezi  has two phones, one for men, and another for women.

COFAPRI  is now growing as stated before. In this respect, we discussed with Nyangezi members the ways in which we can extend the project outside this area.

It was convened that the coordinator will travel to another area, that is Mudaka, 30 km North Bukavu (for the moment we are located in the South, 34 Km from Bukavu) to sensitize women and girls over there. Yesterday he rang me and he told me he is now preparing how to go there for sensitization.

Soon, we will get more details to follow-up.

Up to now. we are still very limited in what we could be doing.

The obstacle is that we cannot lead the campaign through media because we have not been given the registration yet.

We have supplied all the required documents and were told to wait. As elections are closer, they told us that the priority first is to elections. At the same time, we were allowed to start what we can.

Meanwhile we will get our registration, but this is orally done –  no written evidence.

COFAPRI has got a lot stories to tell to the world –  and particularly, our readers.

Women & girls have a long walk to fetch wood

One awful story was of our woman member who was recently battered by her husband.

We were informed of this member’s situation via her neighbor who had just attended the meeting for the first time. After the meeting, three members went to visit her. She did not allow us to reveal her name but she told us she  was 43 and she had seven children – and all of them never go to school, although the father drinks beer every day.

This is the story already translated in English. The original was in Mashi, the language that is widely spoken in Nyangezi.

‘”Last Friday, I went to the field to fetch some wood for fire and then got some potatoes for the evening meal. I left home with my neighbor, who is actually a widow.

We went down to the swamp where our fields are. We did our activities, and in the evening, we returned home with a pile of wood on the head and a basket of potatoes on the back.

We were very tired, but when I reached home, the father of my children started to point at me and talked to me with high voice that I took long in the field.

He was already drunk, but I tried to tell him that from the swamp to home, it is a long distance (and as I know the area, one can walk almost 2 hours to reach that swamp).

I told him that besides the long distance, there was a lot of activities to do, like weed out the plants, root out potatoes and wash them, and collect the wood to take home.

He could not listen to me and he jumped on me. He beat me badly that I was hurt on the arm, you see now how it is...

'My son, if you can help me get some medicine, that could be fine. I could not tell anybody [about] this sad event because he could kill me this time. My son, we have seen a lot of things with men... I will not tell you what mothers never tell to children…'”

The response I gave her was that COFAPRI will support the expenses owed at the dispensary.

She was very delighted, and she told us to give the money straight to the nurse and not to her because her husband will take it from her. We respected her word.

Actually, this is one story, but not as grave as what usually happens with women in DRC remote villages.

You can see how many activities this unfortunate woman had done – and as encouragement, her arm was broken by a drunkard husband.

The money he buys beer with could be used to pay someone to relieve this woman with heavy jobs.

Pay It Back With Suffering and Silence

But the idea here for such men is that, I have paid the dowry so, she has to pay it back.  He could also go with his wife and they work in the field together – but he cannot, simply because he is the man of that wife.

The woman –  though injured, cannot tell the event to anyone, for fear of being more molested; that is the village.

This woman was truly suffering if one saw her, and her eyes were full of pity.

What we did is that we took her to the nearest dispensary, and her arm was dressed. We accepted all the charges.

The recent report I got regarding her health is that she is recovering well, and COFAPRI has already paid everything.

She said thank you to COFAPRI for the noble charity done for her.